I have had the privilege to narrate tale for other authors, all on Audible and available now. If you’re new to ACX/Audible, use the links below to let them know I sent you! 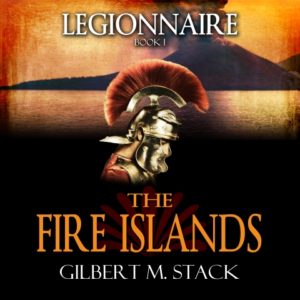 Lesser Tribune Marcus Venandus, Legion officer exemplar, was exiled to the disease-ridden hell hole known as the Fire Islands as punishment for the failed political machinations of his father. While the days of the powerful witchdoctor kings throwing skeletal armies against the shields of the legion have faded into history, all is not right at the edge of the world. Unrest is boiling once again as long dead darkness seeps back into the islands. With the legion more concerned with its personal rivalries than with its duty, it will fall to Marcus and his small, highly disciplined, command to put the horrors of the past back in their graves and literally save Aquila from a fate worse than death.

The Sea of Grass

Forbidden from returning to Aquila, Marcus Venandus responds to a plea from a half-brother he has never met to aid him in the far away land called the Jeweled Hills. When 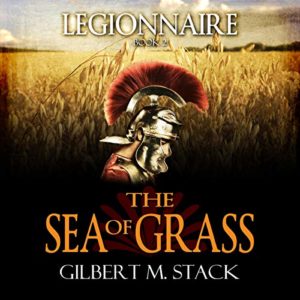 pirates shut down the sea routes the legion officer and his two trusted companions are forced to join a caravan to make the slower journey north across the treacherous Sea of Grass. Yet this may not prove to be the safer choice. A mysterious shaman has sworn to drench the plains in the blood of foreigners and his mastery over storms gives him the teeth to fulfill his oath. As chaos envelopes the trail, it will fall to Marcus to organize the defense and try to shepherd the frightened civilians of the caravan to safety again. 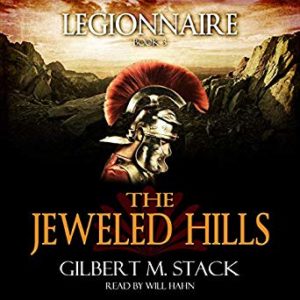 Tribune Marcus Venandus and his two trusted officers have gone through hell in their journey north from the Fire Islands and across the Sea of Grass. Arriving at Amatista in the Jeweled Hills, Marcus is looking forward to a much deserved rest in the home of his half-brother, but fate has other plans for the legionnaire. Soon, he will be wishing he’d never heard of his brother’s city.

Surrounded by enemies and crippled by internal divisions, Amatista is already on its knees and ready to fall. Marcus must act decisively to save everything his brother has built, but without his beloved legions behind him, can Marcus and his friends survive their visit to the Jeweled Hills?

The Fantastica Series (by M.R. Mathias) 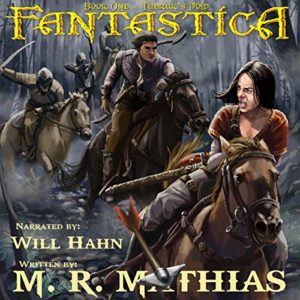 After finding a strange medallion and some maps with markings that no one in his village can understand, Braxton Bray decides to take it all to the Hall of Scholars in the kingdom’s capital. But greed is everywhere. Braxton and a tough young female caravan guard named Nixy are forced to run for their lives, for someone else wants what Braxton found and is willing to go to great lengths to take it from him.

With a hefty, kingdom wide, bounty on their heads, not even the great wizards of the Sorcerious can help them. Left with nothing but each other, Braxton and Nixy have no choice but to get on a ship and go on an adventure that will take them places they would have otherwise never imagined. Elves, dwarves, giant gothicans, and trolls, treacherous forests on distant shores, love, death, terror, and magic all await anyone brave enough to go along. 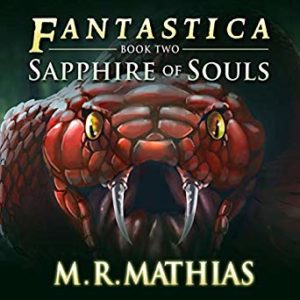 Ragged and weary from their previous ordeals, Braxton and his motley crew of elves, dwarves, and humans, set off into the wilderkind forest in search of the sapphire of souls. The problem is, the last time anyone saw the powerful gem was over a hundred years ago when a wood dragon ate the elf who was carrying it.

With the necromancer Reaton-Stav forcing his animated corpses to wreak havoc at every turn, and the demon Pharark using the giant gothicans and trolls to invade Narvoza, the future of the realm hangs in the balance.

Can our heroes find and destroy the sapphire before Pharark can use its power to bring the kingdom to its knees? Will the necromancer who covets Braxton’s medallion find a way to stop them? Does the love Nixy and Braxton share for each other even stand a chance in the brutal world they’ve found themselves in? There is only one way to find out.

Step into the world of Fantastica. 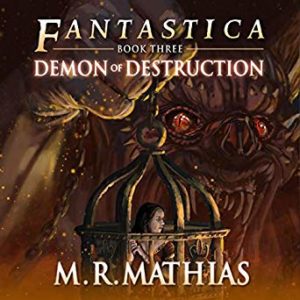 Pharark, the demon of destruction, isn’t very pleased with the way Braxton Bray and his companions thwarted his plan to use the Sapphire of Souls. With the might of his troll horde tearing through the Kingdom of Narvoza on their way to take the capital city of Camberly, our heroes find themselves scattered and without any sort of plan to stop his reign of terror.

Braxton, Chureal, and a few others are left searching for a way out of the Wilderkind Forest while Nixy sneaks off to rescue the orphans she holds dear, with only timid Suclair to help her. The two women get caught in a race against time, for, Lord Ulrich and his giant Gothican warriors are bearing down on Antole and ravaging the city around the terrified children, and the necromancer Reaton-Stav still wants Nixy’s head and Suclair’s father’s spell book bad enough to do anything necessary to get them.

A bloody war has over taken the kingdom, and now the dwarves and elves have no choice but to get involved. Will Braxton be able to find a way to use the power of the Void to stop the demon’s brutal rampage? Will Nixy and Suclair get trapped in a city overtaken by Pharark’s huge ruthless destroyers? Or will the twisted necromancer get them before they even get that far? Will innocent, young Chureal and the hatchling dragon she’s befriended be able to survive amid such violence?

With plot twists so intense they might give you whiplash and clever heroes bold enough to face impossible odds just to have a chance at winning the day, this is one series you don’t want to miss. Clear your calendar, and lock your doors. If you haven’t already, the time has come for you to step into the world of Fantastica.

Warrior of the Void 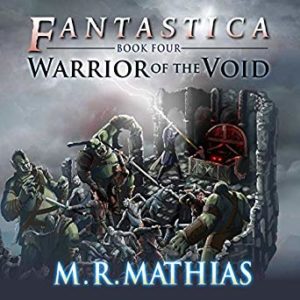 Braxton, Cryelos, Chureal, and her young dragon Cobalt have suddenly appeared in an unfamiliar land. Only it isn’t so strange to Chureal. Not far from where Braxton found the young girl wandering alone in a battlefield, the group ends up in the middle of a war between kingdoms with wizards more powerful than they could imagine. To make matters worse, a group of Darkons, flesh eaters that used to be men, are on the verge of setting loose a terrible creature called the Drar that will destroy them all. Evil Darkanna witches, who can can knock a dragon from the sky with a simple clap of their hands are using their mannish creations, as well as ogres, true mountain giants, and creatures beyond the imagination to break this evil free.

Braxton can no longer seek Taerak’s wisdom because the ancient Void Warrior’s journal is on the other side of the world in Narvoza, with the dwarves. Left with nothing but a vague legend found woven in a tapestry, and bits of elven lore Cryelos can barely remember, our heroes must find the Staff of Aevelon, and then reach the altar at the summit of Mount Preal before the Blood Moon reaches its apex. Even if they manage it, they will still have to figure out how to use the staff to stop the Darkanna and their ferocious minions from setting loose their evil monstrosity.

Warrior of the Void, the finale of the four-book Fantastica series, is nothing less than a blood-tingling, heart-pounding race against time with terrible forces trying to stop our heroes at every turn.

Welcome to the world of Fantastica! 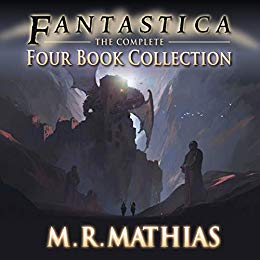 A powerful artifact. An unjust bounty. Can two souls, forced on a voyage to places they never dreamed possible find their way home and save the Kingdom of Narvoza?

Step into the world of Fantastica with this complete four-book collection compiled into a single anthology.

From the mind of multiple award-winning, international best-selling fantasy author M.R. Mathias comes this massive, epic tale about a young man who finds something powerful and has to first run for his life with the girl he is falling in love with, then risk everything he holds dear to try and understand the wealth of magical power that found him.

Will he be able to defy the demon Pharark and his hordes of rock and wood trolls?

Can he stop the army of giant Gothican warriors bent on destroying the Kingdom of Narvoza?

Elves, dwarves, wizards, and powerful artifacts, harrowing voyages to distant and wondrous lands, demons, necromancers, and dragons, all await listeners brave enough to step into the magnificent world of Fantastica. 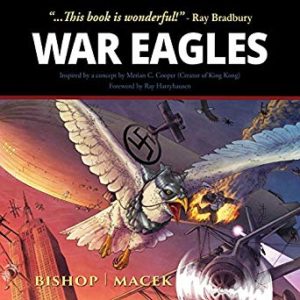 Inspired by a concept by Merian C. Cooper – the creator of King Kong. Foreword by Ray Harryhausen.

Just prior to the start of WWII a publicly humiliated Army Air Corps test pilot, court-martialed for an unauthorized flight that endangered the life of President Roosevelt, takes the only job he can get – flying an experimental airplane around the world from South to North poles. When his plane is attacked and crashes in the Arctic, he finds himself in an undiscovered land inhabited by a lost tribe of Norsemen who ride giant eagles and, in a surprising turn of events, becomes America’s only hope against a devastating sneak attack by the Nazis and their powerful new electromagnetic weapon. 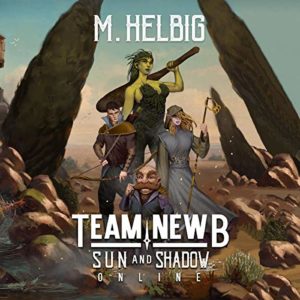 Being murdered. Not so great. Waking up in your least-favorite game afterwards…

While trying to figure what the whole “sword” thing is all about and which end of it he’s supposed to point at the cuddly, woodland creatures who keep giving him owies, Lucas stumbles across a player who looks rather familiar.

Is he the man who murdered him? If he is, why is he in the game, and how can Lucas make him pay for what he did? Worse yet, Lucas’s pretty sure he left the stove and the air on before the whole getting murdered thing. Worst day ever.