I thought I’d write a quick note to let you know what’s transpired in my writing life these days. Let me rephrase- my publisher thought it would be a good idea to write a quick note, etc. And naturally I’m delighted to do so, because I couldn’t be happier with my career since I signed that contract. It’s open-ended regarding duration, and that makes me happy too.

The Eye of Kog 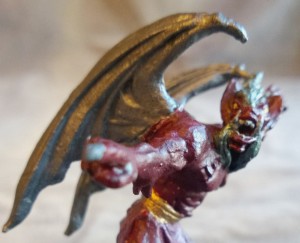 Most of my writing time is spent chipping away at the crucial last fifth or so of the long-awaited sequel to Judgement’s Tale. And I say “long-awaited” with confidence, because I’ve been here every day, waiting. The thought-flow with this tale has covered my entire chronicling career, and I’m sure this slow progress has something to do with this incredulous feeling I have that it might soon all be on paper. What remains ahead of me is the climax of both books, where the time-line accordions back in, so that characters are doing things at the same hour, and where many of the main heroes finally meet. Those would normally be interesting scenes on their own– add the fact that a liche and Earth Demon are also present, with the fate of the northern kingdoms at stake, and you’ve got a rather complex interaction of events to sort out.

One additional problem I’m starting to have is the Point of View; characters who have been off on their own for hundreds of pages are now meeting others who have served to narrate the action for their own threads. Judgement meets Gareth, Treaman meets Pol. Who wins? Which “side” do I take? It’s harvest time for all the work that’s gone into chronicling their deeds and these are happy choices. Still tough ones.

I plan to finish The Eye of Kog by July 4th. Yes of 2016, wiseass. The idea is to bring it out as I did Judgement’s Tale in a set of novellas (three this time), followed by the full novel, then paper. The tale I originally saw as a single book, if stacked up, would trip a rhino. I flatter myself that many authors might not know what to do with themselves then. For me, not a problem.

My much-maligned “other WiP” is the third installment of the Shards of Light series, following The Ring and the Flag and Fencing Reputation. W’starrah Altieri is the protagonist 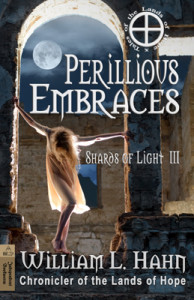 and third member of the unwitting band of heroes who may be able to save Cryssigens, and perhaps the entire Southern Empire, from falling back into civil war and ruin. Just as the first two books told us about Captain Justin and the Stealthic Feldspar, Perilous Embraces follows the Lavender Lady in a tale of political intrigue with more than a little romantic heat.

So, in a nutshell I’m trying to chronicle the deeds and feelings, in second person voice no less, of a beautiful woman with tons of suitors, who is clever, ambitious and can see the future. In my personal dictionary that’s the definition of the term “away game”. The draft is about 60% complete and I’ll post the ticker on my website once I’m done with EK.

Chronicler Trivia: I never have a detailed outline of my tales, since I’m working from long-standing memories of what I witnessed. But I have had a curious ability to predict how long the stories will be, ever since I realized that “Judgement’s Tale” had to be two novels rather than one. I lob a word count out there, and I usually come quite close to hitting that number when the smoke clears. A bit spooky, but fun.

I’m less sure about how long it will take but based on length I’m going to go with Labor Day 2016.

And by then, I’ll have been to several more places in the Alleged Real World where I can continue preaching the Lands of Hope to unsuspecting customers. 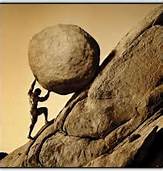 None of that excuses a lack of writing! I’m back on it, now I promise. This is my favorite image to stand for my writing process– and I know about Sisyphus and all but to me this is a very Hopeful image. Forget the backslides, those happen (and usually caused by hubris anyway). No, man– that rock is MOVING! Unbelievable, but happening and all the time.

Just a bit slowly is all. But hey. Big rock.

2 thoughts on “What’s Been Going On”