I have played games all my conscious life, honestly. Surely they are legion, even if you confine yourself to the games that come in a box with rules (which I am). Few things attract my soul more deeply than this notion of orderly, fairly rigorous play: that there are turns to take, rules to observe, other people also putting their attention and love into this activity. I have had various jobs, lived in different states, grew in one family and helped make another… it’s a full life. But always games, always games.

And I don’t think I could possibly tell you which one was the best.

But the worst? No hesitation.

It’s not even close.

I deliberately never studied Psychology so I could diagnose all the reasons why people engage in leisure activity. The main reasons were that it sounded like hard work, and also that I was too busy playing games, see… but I confess I also didn’t want anything to spoil the fun.

And that is kind of a worry isn’t it? That we’re not really playing for any good-enough reason to keep at it, once we learn more. I bet nobody on earth plays as much as they want

to. Yet we don’t manage to take the steps which that revelation would entail. But there is a layer of lip-service out there, to the effect that yes, there are good effects from a sense of play (which always comes off different, somehow, from actually spending time playing). Again, I didn’t study that stuff.

But I still think I’m an expert on games. Based on the whole 10,000-hours thing. Actually, if that’s what it takes they probably should create a new level above “expert”. Dude, I’m a Game Master. That’s true, I can rustle up witnesses if you don’t believe me: that title’s mine. So listen up as I lay out the reasons why people play games.

Again, this is not about heaping sand on the beach, or volleyball, or “playing chicken” on a narrow road in a muscle car. Those things are play, sport and suicide, respectively. I’m talking about GAMES here, but I’m letting out hopscotch, tic-tac-toe, most anything that makes sound effects on a console, and about a billion other things you get caught doing without having finished your homework. All games, yes, but all out.

What, did you think I was kidding before? So with that in mind, why do we ever play THOSE? Sure, sure, “there’s nothing better to do right now” and “it was fun”- but those just lead to something else at the root of it. Keep asking why. Then see if you agree with my list.

There’s  a word for someone who plays a game a thousand times and doesn’t win once. And there’s a couch for that person to lie on while he tells his troubles to a trusted counselor. But the REST of us, you cannot deny, have to feel a little tug in our core, somewhere between where we get hungry and where we need to pee. That tug that sees a bit of glory ahead, and that involves of course a level playing field, something you could win that would be fairly won. Yeah, we all kind of like that. 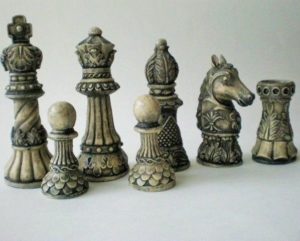 Example: Chess might be hard, but you can’t ask for a more even contest. It’s you and one opponent (exception: See Double Bug-House if you want to make your brain squirt out your ears in an effort to escape). There are just the same number of pieces, the same kind. Sure, maybe he gets to move first, but you play white next time. Game on.

Because We’re Getting Better

Good games don’t have to be ones where you win all the time- in fact, you know the game’s not good if you do, because of the first “why” above and then adding the Categorical Imperative. But it’s fine to lose, it can be great to lose even a lot of the time, if you know the way you play is improving. You get closer, maybe start to win more often.

Example: Magic: the Gathering is a collectible card game (CCG) which lures you to find just 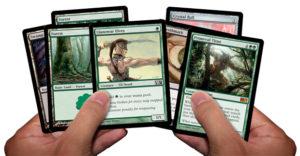 the right cards that bring you victory. You try new combinations, you balance out how much land to how many creatures; your deck does better. Of course you learn you’ll never get that holy grail of THE deck, the one that wins no matter what. You pick your poison, you keep staring at that one card you REALLY love until you find a way to make it work with the others. And not coincidentally, you go out and buy more cards because you never have the ones you need… hey, great games are fun, not always cheap.

Because We Learn Something

Quite aside from getting better at the game itself, many of the ones I played-including the worst in history- were war-game simulations. A lot of these were quite complex and I get 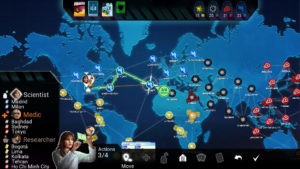 that not many people are really into those. But especially as someone in love with history, to see the game designers demonstrate a principle– like the speed of cavalry, the power of missile weapons and the importance of morale– those were very illuminating moments for me. I walked away thinking about that, win or lose, and it made me understand books I read and classes I got to teach with greater comprehension.

Example: Pandemic shows you in a very simple way just how quickly diseases can go from “we got this” to “oh, yeah, spot of trouble here I guess” to “HOLY CRAP WHAT WE GONNA’ DO NOW”. It’s also cool because players are cooperating, not competing. Doesn’t matter who cures the damn virus– take my city card, use my free ride, just get your butt into the lab pronto and get that vaccine before it reaches Buenos Aires.

So much for the rational and graspable, to quote a great First Officer. I’m very much on that side of the ledger myself– I inherited my Dad’s competitive spirit and something about simulations simply turned me all the way ON back in high school. It’s been a perpetual motion machine since, still running like a top. And yet…

Sometimes the game just goes sideways and I’m so here for that. And there are games practically designed to do such things. The rules build in chaos, they seem to account for odds and method and all the usual, yet you realize that in fact the game bears a subversive agenda, something that has little to do with winning or losing. And you actually start to want THAT. Most role-playing games end up like this at some point and it would take five more blog posts to lay out even a tiny fraction of the situations I’ve been present for. But you can read about a few of them…

Example: Rumors is out of print now I believe, and it’s not for kids. Draw a few cards with moral behavior questions on them. Quiz your soon-to-be -former-friends with these Yes/No questions in an effort to make them answer the way you figured. If their answer matches 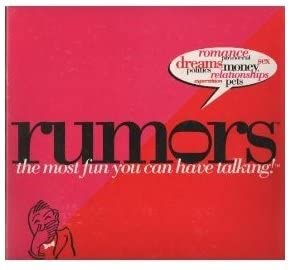 yours, you discard and come closer to being “out”, thereby winning. They, of course, resist this outcome: everyone chooses “Depends” as their answer, leading to the group chanting “ON…“, forcing the questioned person to elaborate. Anyone may call BS on that expanded answer, and the group votes with either a halo or a pitchfork. The accuser or the defendant suffers extra cards as a penalty.

The point is, one person invariably starts to challenge every question– not because they think they can win, but because they believe they will hear something scandalous about someone they only thought they knew. The game goes out the window and some of the players end up holding half the deck but laughing until they’re weak.

There may be a fifth reason; in fact, I cannot shake the notion that there is. But time presses, I’ve barely set the table and still have not once mentioned the worst game ever played.

I promise I will next time. No, God as my witness, it’s horrendous. Appalling. The opposite of every reason I listed. It’s the uttermost bottom of the world in terms of game play.

You won’t recognize it. And when I’m done explaining you’ll be glad of that.

For now, make sure to list your favorite game in the comments below. And then, when’s the last time you played it?

7 thoughts on “The Worst Game Ever Played? Part One”