{A column originally published elsewhere in 2013, now brought home to my own site.}

It starts with me up a tree. I was probably eighty feet off the ground in a spire-straight maple bigger than you could hug. I’d been up there for hours, and was going to keep doing it for weeks. I was eight at the time. And then more weeks again at nine, and another month or two at ten, and twelve…

Last week I had no intention of blogging on this. But one of my sisters actually requested that I write about it- and how many of you, fellow authors out there, have actually had a blog request? Since it comes at New Year’s, it’s quite appropriate to the theme of re-solutions (where we essentially try to solve our problems for the second-or-greater time). But I want to be honest with you- I would not have volunteered to write this.

Because this is a confession.

Picture me sheepish, my hands hesitating, trashing the first few drafts (was the first time really an accident!?) and looking furtively both ways before getting down to cases. That’s good news for you of course, because now you can drop any unpleasant impulse you had to think about quitting smoking or laying off the dark chocolate in 2014, and just bathe in the schadenfreude for another few minutes. All for you, dear reader. And here goes-

Seriously, I do everything again- all kinds of stuff over and over. I seek the old. You?

How many kids do you know were digging into ancient history by the time they were five? My sister (not the first one, I have a whole set) taught me to read before school started, and I was into books about as soon as I could turn the pages. Ancient history, though? Made perfect sense to me- these people were not different from us, once you understand a bit about their culture, technology, circumstances, you can see right into their problems, the choices they had to make. And I couldn’t get enough. It’s ALL happened before- that idea didn’t bore me, it thrilled me. I wanted to see it in the first times, and then look for it again in later ages. I still do.

“History repeats itself” is not an insult.

But beyond thoughts, I was repeating deeds throughout my childhood. I had all the tools, I guess- that distinct scarcity of playmates furnished by life in rural Vermont, parents distracted with six kids and dozens of animals on premises. Most important, I carried an unparalleled ability to focus on the one thing I really wanted. Before I was twelve (geek

alert), I saved up my precious allowance to buy those wargames (GEEK-GEEK!), the ones with the folded up maps and two or three hundred cardboard counters, and if you’ve never seen one of them you’re probably happy about that. I would get Mom to drive a friend over to the house, and we’d go in the basement, spread out the map and play for HOURS. Each game, two-four-seven hours: thanks for dinner Mom, and back downstairs. And we’d play the SAME game, for months.  I was always the Japanese playing “Solomon’s Campaign” against my  best bud Bill Michaels, and I swear to you I never won, not once: zero and probably a hundred and twelve. But we loved it. Over and over we planned when to launch the invasion, how many supplies we’d need to hold this island, where to hide the subs. Maybe this time…

And so it went: garbage-lid-and-broomstick jousting with my sister (another one, younger than me), setting up a black trash bag’s worth of little green army men on the hillside pasture (with inevitable casualties when it came time to gather them up), using the tree swing to run diagonally up the trunk like Spider-Man, and pose until gravity insisted. Barn-crawling through trap-doors, between stalls and across beams to find the absolute coolest way to get from any door to any other exit, and then timing myself endlessly for speed- parkour before Nikes. Keeping constant watch from the tree house for expected, if mythical enemies.

You can read any number of articles about the value of unstructured play time- here’s one-and I recommend them to you if you had such a childhood (because you’ll feel smugly good), but not if you have kids (because you’ll feel like a louse). We all know today, let your kids run around loose and they’ll crate you off with irons on your legs and a raincoat over your head. But my experience was doused in repetition and ritual. Lord, how I loved it. I re-turned to it passionately, constantly, eagerly. And re-peatedly.

So, the tree. We had a half-dozen super tall maples on the property and the same number of apple trees. But this one, the furthest south of the pair in the sheep pen, was the best for getting high. The limbs started just above my reach, but that was OK because Jason the ram wanted to break the leg of anything that entered his domain, so you had to take a running leap anyway. After that, it was as easy as using your hands and feet to go upstairs (something I still do at times). In seconds I could be so high off the ground it gave me a jolt in the perineum to gaze down. Look it up, I’m on a roll here.

And there were limbs big enough to hold me right at the top, where the leaves thinned even in summer and I could see… well, everything really. All the lands thereabouts, mine and neighbors’ and open fields to the hill beyond the beaver-pond, which as far as I knew nobody owned. Higher than the barn roof, I could think about flying as the superheroes did (I expected I could fly far away and always get back home without help- surely the borders between states and countries would be brightly marked, like on my maps). I was so far up I thought the air was cleaner- and in rural Vermont, that’s quite a thought to have- but the limbs of that maple were utterly secure. I climbed like a monkey, and was safer up there than in many places on the ground- for example, within arm’s reach of anything sharp or flammable.

And up there, safe near flying, I learned so many things. I learned that fear of heights is relative- most of my relatives have it worse than me. I found that birds never get quite used to you, but will eventually come a bit closer, and not fly away as fast. I realized one of the great truths learned by the stealthic Feldspar- that people almost never look up, even when you are speaking to them.

And the next thing I knew Mom was ringing the bell for dinner. She had to- we were all over creation. I went up that tree a million times, honestly- long past the point  there was anything new to see or think about. And if I wasn’t gathering wool up there, it was something else. Something I’d already done, time and again.

And With Books? The Same!

I read books over and over (and I bet some of you do too- but not like me). I read The Count of Monte Cristo about every four or five years. Here I am {Editor’s Note: originally, in 2013} facing more than a half-year with no progress on my WiP: so naturally I went back to re-read the tales I’ve already chronicled (only one of which is unpublished, and took a little polish- for the fifth time). My lovely wife gave me the new fantasy book I requested for Christmas (Mortal Instruments, I wanted to check out the competition- hah, as if). What did I do? I continued to re-read, for maybe the fifth time, the first few of the John Carter, Warlord of Mars series. I stare at the maps I made and think again about the adventures I’ve seen in the Lands. I repeat conversations I’ve had, while doing the dishes, or playing a favorite computer game… again. Wherever I turn in life, I look to wrap myself in what I’ve already enjoyed.

After all, what’s a half a year? The main character of my WiP, the Stargazer preacher W’starrah Altieri, is fairly new to me. I spent thirty years looking at the Lands of Hope before that fateful day in 2008, when I finally started to chronicle what I’d seen. I must get 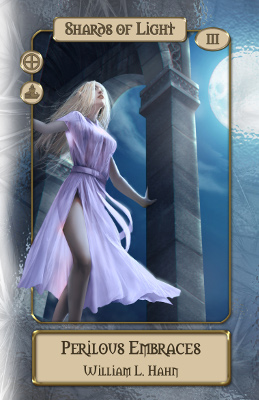 to know this lady better, I think, before I go any further. And no question, there was something about Dejah Thoris (John Carter’s love) that reminded me of W’starrah. Gorgeous woman, sure, but something more… maybe I should read another one in the series. {Editor’s note: the toughest thing I ever wrote is now written- Perilous Embraces is available!}

Or maybe I could climb that tree again, and feel the breeze around me, hear Jason’s impatient snort of outrage below. Doing things repeatedly doesn’t just make you familiar with them (familiarity, by itself, leads- well, to contempt of course). Returning to something you love re-inforces you, and in the end I think it re-news you. Like I said, good for New Year’s. There are people who constantly move from one new thing to the next, and I salute them in all candor. I sometimes think that perhaps those scores of thousands of hours, in the end, will add up to a wasted life. And believe me, I’ve thought that before. But I’m staying here, and I’m doing this.