It’s not what you think.

True, we’ve hit on this theme before in many places. Hey, sue me, this is what we do in fantasy. But don’t forget the series title, dear reader- this is about the classics, and I don’t mean Tolkein. Once again, you’ve never read it (be honest); a name as famous as Justin Bieber (now THERE’s another world for you). Everyone “knows” it, but not on paper. Hollywood and Broadway each took a swipe at this incredible tale: you ask me, they both missed by a mile. It’s not a horror story. It’s not merely a drama or a mystery and it sure as shooting is not just a romance.

No, Gaston Leroux built a world for you when he wrote… The Phantom of the Opera.

Never mind that condescending “sure, it’s all semantics” nod you’re making. Fantasy has to build a world for the reader, not just point at it. You can’t bluff world-building- so you wouldn’t normally expect a tale set in the Alleged Real World to need it. But as authors of historical fiction know, today’s readers are a spacy race, and anything before the assassination of Kennedy is formally classified as ancient history. Maybe before Lennon. Even so, you can assume gravity, taxes, the nuclear family- billions of “normal” things in many tales. And plenty of other instances, like the calendar of days, don’t need explanation even if they’re not important-  the author can just write “on Tuesday” and everyone’s fine. Think about what it means to have Conar’s Day (your Sunday) instead- when do you stop to explain that? 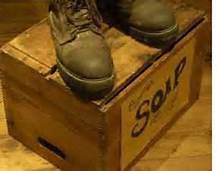 But this is the genius of what Mr. Leroux did. His tale is set in Paris, late 1800s. He draws on a wealth of worldly knowledge you already have- the gentleman caste, police procedure, what an opera is- but even so, he takes you into an entirely different world.

Where? Inside the Opera House itself!

The Craft of the Tale

I don’t want to spoil this pleasure for you, so at the top I say- read the book, it’s marvelous. And since you haven’t done so before, take note of a couple of things I’ll point to here and illustrate with examples:

As the story opens, the Opera sees the arrival of two new managers- nice enough guys, who like the arts and love the idea of being managers. But they know diddly about how the place actually runs. So you get a box seat on the action, as everyone steps into the office to whine about something that’s gone mysteriously wrong- and in the process, fills them in on how the Opera works. At one point, the Ghost (Erik, the Phantom- you know, HIM) steals a white horse so he can carry off the lovely soprano Christine to his palace in the underworld. How do we find out? When the stable-chief goes to the bosses to complain. I want you to fire all these dishonest stable-hands, he shouts. The managers blink and respond- wait, we have a stable? Oh yes, twelve horses… and now you’re hearing about grooms, and the different operas this matched pair and that black horse get used in, the chariot… None of that directly informs the plot- but you begin to sense how incredibly LARGE this operation is.

How large? I’ve already told you- it’s an entire world.

There are 2,531 doors and 7,593 keys; 14 furnaces and grates heat the house; the gaspipes if connected would form a pipe almost 16 miles long; 9 reservoirs, and two tanks hold 22,222 gallons of water… 538 persons have places assigned wherein to change their attire. The musicians have a foyer with 100 closets for their instruments.

How the Story Changed

Look at what Hollywood has done with this epic- pumped the horror.  See Lon Chaney wrestling with his organ, and the poor girl fainting dead away? Great imagery: Beauty and the Beast, minus the happy ending. But a trip to Erik’s underground palace is usually given short shrift on film. The underground lake, so Stygian and remote, is a great element: people die there. But that’s below FIVE cellars- where do you see those? The second level, where those horses are housed; the third, where the poor scene-setter supposedly hung himself, his life forfeit to hide the existence of its secret trap door; the fourth, where the rat-catcher evokes a scene from Hades itself- THAT was spooky! But you can’t see it on film, evidently- because there is no world there.

What did Broadway aim for? Duh- romance of course. Christine is beloved of the rash young Viscount de Chagny, but the Opera Ghost poses as her Angel of Music- let the tug of war begin. This is also fine- but in the book, Christine and Raoul flee to every corner of the Opera for a few whispered speeches. She suspects Erik is listening in wherever they go. Finally, they ascend up above the vaulted ceiling into the rafters of the roof where stands an enormous golden statue of Apollo, until she finally feels safe enough to tell her lover the truth. But even there, a shadow flits between the god and heaven… from the sky to the underdark, the Opera House of Paris is a colossal setting that launches the reader into an 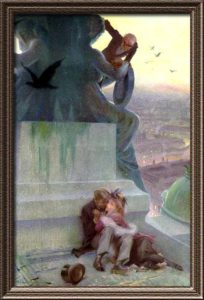 experience so complex and far-flung as to need tons of explanation. Is Erik a charlatan, a mystic, a sorceror, a monster? You can’t decide- because YOU’RE NOT IN THE REAL WORLD ANYMORE. This setting was too vast even for film or the stage, so its directors cut away nearly everything to do with that other world and focused on just one aspect of the tale. Only in the book can you get the full picture: mystery, farce, the supernatural, all of it.

The free Kindle version of Phantom had a few glitches- the author uses footnotes to reinforce that “real-world” feel which is great, but Kindle doesn’t distinguish the break between the end of the note and the resumption of narrative. I’m also pretty sure there are issues with translation here (as Steve Martin pointed out, “it’s like, those French have a different word for everything!”). No way I’m learning French- but there may be a better translation out there worth paying for. And of course the two-page drawings were sadly absent. I’ve substituted some in this article, providing dramatic proof that there’s no accounting for taste.

I could tell you this story has terrific characters and I wouldn’t be lying. It’s pretty rare for me to feel any empathy for the villain- usually I see that the heroes, though admirable, have flaws that can make me angry with them. And Phantom has all this- Erik is horrifying and pitiable, Christine can evince the pity but cannot insist on her own happiness; Raoul is impulsive, the Persian shrinks from what’s needful. But hold on- the most true thing I can tell you, going back to my theme, is that these characters come to life in a fully-realized, beautifully described and completely believable WORLD. Ninety percent of what happens takes place inside the same building, and you’re never done exploring it, meeting its denizens and understanding its culture. This is a kingdom of its own, where old stage crewmen are pensioned with the job of just walking about and shutting doors (to keep out drafts that could harm the singers); where Box Fi

ve holds its secrets through all manner of frenzied searches, and the gas-man needs two assistants just to keep the furnace going. I’m telling you, read about the encounter with the rat-catcher, and you WILL believe in spooks.

Writing epic and heroic fantasy means you catch hell from all sides about world-building: like a flu shot, your readers have to have it, but they complain whenever they detect the smallest pinch. We amuse them with a distracting joke, promise it won’t hurt, and try to get it over quickly. Your book is better for it- but don’t hold your breath waiting for appreciation. Gaston Leroux brilliantly points the way to building a world within a world; this is the most highly recommended of the classics I’ve reviewed so far. In Judgement’s Tale I make use of an ignorant narrator of sorts, in fact two. The sage Cedrith is determined to befriend the taciturn, driven orphan Solemn Judgement despite the shock and embarrassment his company entails. He knows nothing of the boy’s mind and tries to tease it out. By the same token, Judgement- like the reader- knows nothing of the Lands of Hope and Cedrith squires him from church to library and theater in an effort to educate him. How well it works I don’t yet dare allow the public to decide- but I’m mindful that a world can be as small as one person’s soul, and the story of it takes you through straight fantasy to mystery, horror, whimsy, erotica, in short, all the genres of literature.

All the writing in the world, because in the end you are writing about an entire world. A little spooky, truth be known.