The third of my so-called “warm-up” pieces in the return to painting showed me some cheering success, and some warning failure. Fitting that it was a female figurine…

Vuthienne is Primara of the lost city of Oncario, a significant supporting character in the upcoming novel The Eye of Kog. Her city, hidden in chaos deep in the Percentalion, is home to a thriving post-medieval economy and the gateway to Reghalion, the capital where the destiny of this kingdom will finally be decided. I tease her appearance at first, and it’s some time before Treaman and the party lay eyes on the city’s leader and the lover of their friend Januelus who brings them to her presence. 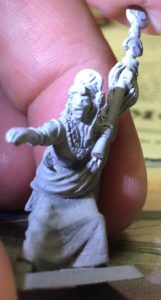 The door opened behind one side of the throne, and Treaman saw then, what they all had waited for.

His first impression, as he stood with everyone else for the Primara, was one of striking beauty. Vuthienne was tall and long-limbed, with a lustrous shock of red-brown hair spilling around a golden circlet and a slit scarlet gown that left no doubt about the breadth of her curves. A smooth and unhurried pace allowed no choice where everyone should look, for whom everyone should wait to speak.

-The Eye of Kog, Downfall

Vuthienne is important to the plot of the tale in ways that don’t make it onto paper. The careful reader can gather hints of her power and policy and the way things have moved because of her presence. I thought it was very important to paint her, because that makes me spend more time thinking about those “background scene” issues. I’ve just received the galley from editing and will be able to read more closely now, with things I’ve learned while contemplating her figurine. Crazy, fine, you don’t have to believe me. But it’s true– I know her better now. 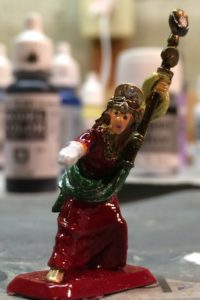 to its days of glory. Cut off from trade, she decided to take up the Scepter of Law, which in custom is only wielded by the descendants of Areghel the king. The artefact continually sparks and pains her (something Treaman experienced when he briefly held the Sword of Air), but with its abilities Vuthienne was able to expand the physical boundaries of the city-state out into the chaos, and bring increased fertility to the crops, greater efficacy to the key industries practiced within the city. Thus even before the ruin of Oncario, Vuthienne was sacrificing her life for her citizens. This informs the cruel choice she must make at the end of the novel, when the Eye of Kog also falls within her ambit and brings her to heroic ruin. Yet Vuthienne’s unhesitating courage, and the masquerade she conducts to pull off her ruse, are key to any hope for Treaman’s party when they are captured by the undead. Spoiler-alert? The tale will be out soon.

Since I’ve restarted my painting hobby, this section deals mainly with the use of the brush, not the camera. Vuthienne proved remarkably difficult to undertake, and I wasn’t fully successful. Let that be a lesson to me when I try for the big-figs next.

First off, I just didn’t have the right colors and my attempts to mix what I needed were comic failures. So I’ve added another half-dozen bottles to my growing palette (you can get them on ridiculous sale at the craft stores if you watch) and in a couple of cases just took the shade straight-up, which simplified matters greatly. Her clothes and adornments are fairly well described in the text so that was a good guide. Vuthienne is shown here before she took up the Scepter of Law or tried to wear the Eye of Kog, so you see the staff traditionally used by the Primara of Oncario in her hand. 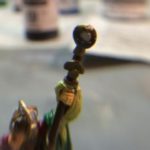 That was my first minor success: you can’t see it in the picture, but the top of the staff shows Solar, Unal and Aral and I was able to put the proper colors on each. The sun disk at the top is gold-on-bronze, nearly invisible to your eye but it’s there. Beneath that the smaller disk of Unal is in silver, and the crescent-slice of Aral is in silversteel. Nice bit of detail work, but my camera skills were not up to the brush: I discovered that I can show more of a portal-view by letting the disk of my magnifying lens show in frame, so I have a few shots like that this time. Just couldn’t get close or bright enough to reveal it, you’ll have to take my word.

The biggest failure, of course, was the face. I aimed to shade her fair, noble skin tone with just a light blush around the lips and cheeks, but failed disastrously. It looks like cake make-up to cover wrinkles, it’s thicker than clown face. Plus, I didn’t real 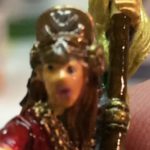 ize it, but any figure with an open mouth immediately looks undead! Check it out, I was definitely fighting and losing an

uphill battle here. Several attempts did little to improve matters. Also I could not get the white around the pupils to show, the smallest dot I could make still looks like she’s a spice-addict from Dune. Had to cut my losses again.

The typical black wash technique and a little dry-brushing worked well to make the gown and hair look a bit more realistic. I tried for a cloth-of-silver effect with her green strophion, but metallic hues don’t dilute readily and I couldn’t stop it from clumping. I was shading at first, dry-brushing near the end! But it was stubborn; still the effect is there I’d say. 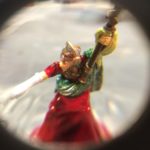 Another aspect of this figure that made it tough to shoot was her stooping posture. Vuthienne quite literally casts shade at herself, and if that’s not a metaphor for the action of the plot I don’t know what is.

So once again I come away from an encounter with a beautiful woman both edified and embarrassed, which is the story of my life. I hope you’ve enjoyed Vuthienne here and will look her up in The Eye of Kog when it publishes. You don’t see her right away, nor for long enough if you ask me, but she’s worth it. She 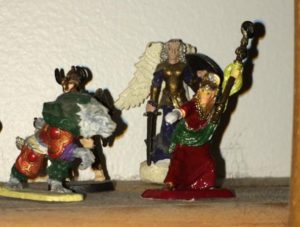 ‘s on my display shelf near a werewolf character for some inexplicable reason… and also up there are Final Judgement and the Bell-Ringer, my latest additions to a collection long stalled by the needs of the Alleged Real World. Next up, the Big Three!