Thou art wise to consider such a synthesis, Solemn. There are worlds aplenty, but only a single nature.

It struck me while driving, like many worthy thoughts do. And that meant of course that I was doomed to forget and recall it many times, each round trip getting closer to permanent remembrance. How do we commemorate those we know, who we admire and want to emulate? There are many kinds of memorial, of course, but the first I think of are those carved in stone, in a field of many others, each with a few brief

words burdened to somehow say it all. And it’s not always stone– sometimes you see “In Memory Of” on a dark wooden pew or fading in and out with the credits of a movie. But it’s almost always brief, here in the Alleged Real World: even when the medium is intended to last forever, the words take just a flicker of time, as if they were only a spark to kindle on the fuel of our recollection.

The Lands of Hope have none of these, not really. Some few, the heroes, are echoed in living devotion bordering on worship. For the rest, either someone remembers you or they don’t.

There is a narrow category of exception, though; the Children of Hope DO indeed memorialize at times, in very much the way we do. There are plaques commemorating the Battle of Tor Perite, and the discovery of Liftos Gas, the liberation of the Giant-siege of Stathos, the first bridge across the River Sweeping. You see the pattern? Events, great deeds of Hope are usually severed from

the persons who performed them. The Pious Warrior Yula won that battle and is duly mentioned in the inscription– hardly surprising, since he became Emperor of Argens as a result. The names of Able Patent and such are included on those others as well, toward the end. But not always, and never prominently. Succeeding generations of Hope are taught to attend to the act, not the actor.

But there’s another, tougher difference that needs mention here. One reason the Children of Hope do not dwell on the lives of those they erect plaques to celebrate is because in nearly every case, those lives are not yet over.

Hope does not memorialize the dead. At all. 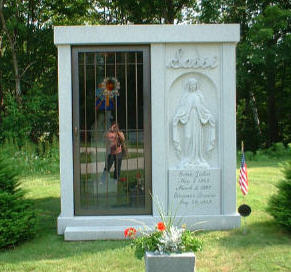 To be honest, they don’t even much like thinking about death, because the Children of Hope haven’t had any guidance on what happens to them after they die. This is one of the chief reasons folks reject the Man in Grey: Solemn Judgement was not born in the Lands and since his father spent his last breath getting him there, Judgement is driven to find out whether death has a “sequel”.

Of course many of us share this need, and there is nothing at all wrong with marking the end of an earthly life. The Alleged Real World has an advantage in this, because many of us believe in a life after death. And also, we have a place, a natural spot set aside to create the memorial.

But in the Lands of Hope, loved ones are cremated, the ashes scattered. Only the Children of Despair put the 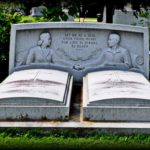 bodies into the earth; the word kemetaria conjures horror, and the prospect of necromancy. When Feldspar explores Old Cryss in Fencing Reputation, he comes across a rare example of a surviving graveyard:

To my left in the nook of the next corner was a small area ringed with a low, two-foot fence of metal spikes; I caught only a glimpse of the irregular rows of stone markers within and turned my head away with a snap. I had heard the stories, but hoped like most children that this one wasn’t true. No such luck- they had really done it, those grand fools of long ago. So proud, so eager to show their spirit even in death, they had built a kemetaria, and allowed their bones to be put under the earth- an added challenge for their souls, to rise despite the odds and still attain heaven. Confident and sure, they had put their flesh into the ground, like the children of Despair. No wonder death had rained down on this place.

There may be other graveyards built by Hope, but very few (it was the passing fad of an Elvish nobility influenced in ways beyond their understanding by Despair). The colossal ancient kemetaria discovered by Solemn Judgement in The Eye of Kog was immediately destroyed by virtue of the miraculous lore he unearthed (quite literally) during his adventure there.

Point being, if you have no place to put the body, you tend to emphasize deeds during life instead of trying to summarize it at the end.

In the Lands, there are songs sung and stories told of great deeds, naturally; but not all of them are old or concerning folks who only lived long ago. Trekelny in Three Minutes to Midnight seems confident that there will be songs sung about his stupendous act of Stealth, and looks forward to hearing them himself. And yet, almost no person in the Lands knows what an epitaph is. 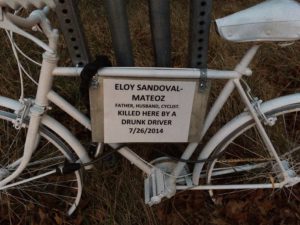 Here in the ARW, we’ve come to memorialize outside the graveyard, especially in places where people are likely to pass and see. Roadside memorials always make my heart drop, because I instantly know I’m looking at an unhappy ending. It’s a little like the graveyards have burst, and now spread among the living. But from what I see, the messages sometimes get longer, and are often uplifting or even hopeful. For those that are sad, I understand. It’s not usual to know a loved one has suddenly died and think “ah yes, they lived long enough”. No, it’s always too soon.

One last thought comes to me, more triggering really but a difference that must be mentioned.

When the doer of a deed is alive to see the inscription, there’s a lot less monkeying around with their legacy.

But those long dead can have memorials erected that they did not aspire to, with messages twisted to suit a later generation. We are wrestling today with such a problem, trying to sift out the good from the bad like mixed grains of rice and wheat, and as a result some memorials will come down. If driven by justice, that will be good.

Better still, if we remember the virtue as well as the deed, as they do in the Lands. Let us tell the tale of each other’s glory, sing songs and keep the flame of those we admire alive. Surely what happened in life is of more value than the loss we feel on its passing.