Regular readers of this site will recall TC Southwell and Vanessa Finaughty, the South African author-duo who write across the fantasy and sci-fi divide. Today we’re proud to alert our readers that their joint offering Doorway to Destiny is now available. I hope you will take the time to explore the fine work of these two authors, including their latest. 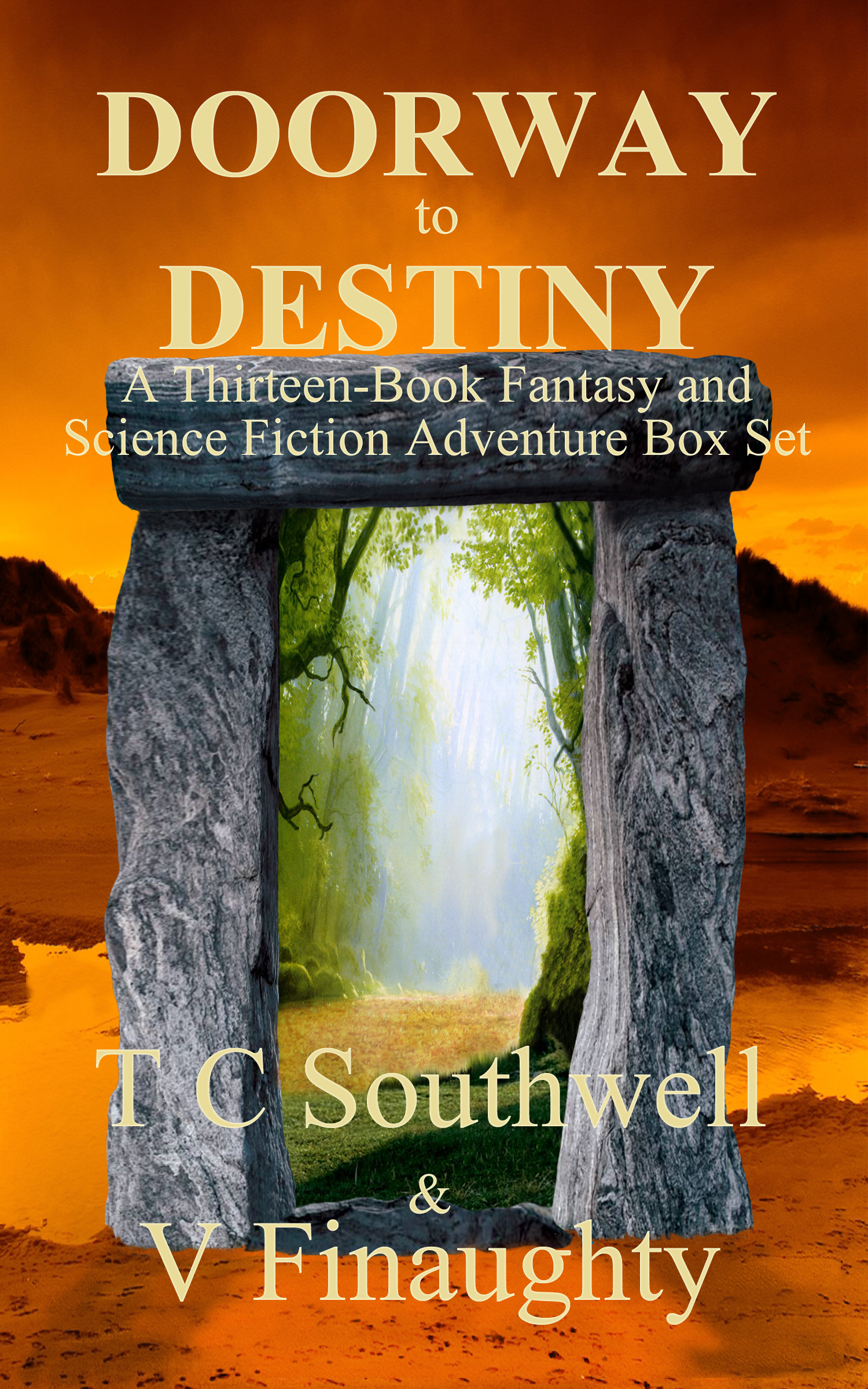 This collection of eleven fantasy and science fiction novels and two anthologies will transport you to strange and exciting worlds to share in the tragedies and triumphs of complex yet endearing heroes and heroines. Discover the gripping works of authors TC Southwell and Vanessa Finaughty and be swept away by magical adventures, epic battles and futuristic voyages to unknown universes. Learn how a vengeful assassin reshapes the fate of three kingdoms and share in a quest to discover the origins of mankind, then follow the tale of a young queen’s fight to be free with the aid of a combat cyborg. Two short story anthologies spice up the fare with dragons, sorcerers and magic galore, and a child of another god strives to save his world from mankind’s ravages. When a mortal dark god treads a tragic path as he rises to destroy the Overworld, a brave young girl risks her life to try to change his savage ways. Each hero and heroine takes a definitive step through a doorway to destiny as he or she seeks to right wrongs and save worlds.

Price: 99c for a limited time only 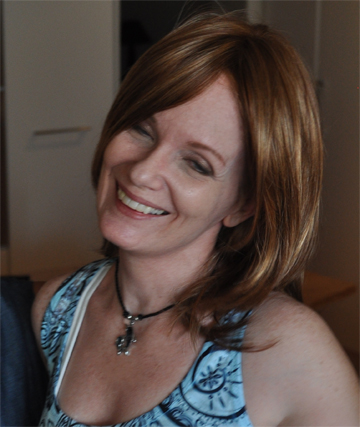 T. C. Southwell was born in Sri Lanka and moved to the Seychelles when she was a baby. She spent her formative years exploring the islands – mostly alone. Naturally, her imagination flourished and she developed a keen love of other worlds. The family travelled through Europe and Africa and, after the death of her father, settled in South Africa.

T. C. Southwell has written over thirty fantasy and science fiction novels, as well as five screenplays. Her hobbies include motorcycling, horse riding and art, and she is now a full-time writer. 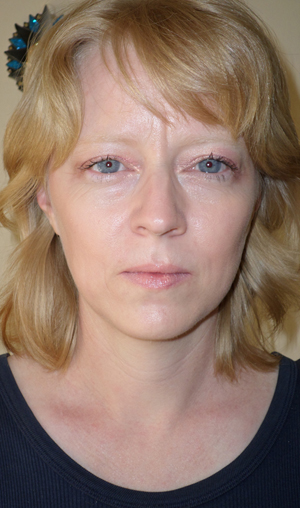 Vanessa Finaughty is an author of many genres who now focuses on fantasy and science fiction. She’s published 15 books, of which 6 are fantasy. Vanessa grew up in Cape Town, South Africa, and still lives there with her husband of fifteen years, her baby daughter and plenty of furry, four-legged ‘children’.

Vanessa has always been passionate about books, and knew from a young age that she wanted to write them one day. She loves animals, coffee and the smell of wet grass, and hates liars, sweltering weather and long queues. Her interests include reading, photography, the supernatural, mythology, aliens and outer space, ancient history, life’s mysteries and martial arts, of which she has five years’ experience.

Guest post by Vanessa Finaughty, author of the Wizard’s End Series available below! 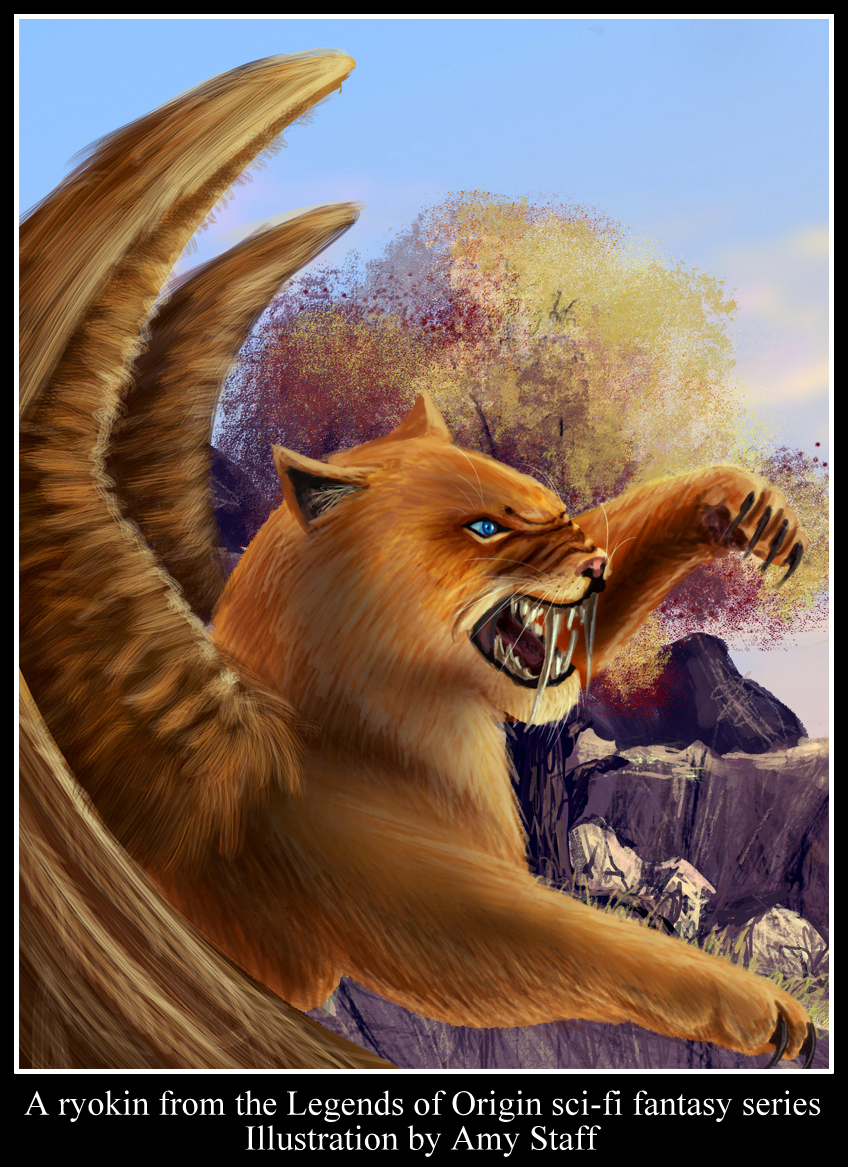 There are as many ways to create original fantasy creatures as there are creatures to be created. I still love my dragons and elves, and other familiar fantasy creatures, but it’s always good to add an original flair to your fantasy stories, something that has the potential to make readers sit back and think, wow, that’s cool!

There are no hard and fast rules to restrict your imagination, but here are some tips if you aren’t sure where to start:

Use existing creatures – fantasy or real life – and add fresh attributes. How much you alter the existing creature/being is entirely up to you. You could take the attributes of a lion or dragon, for example, and create a new physical appearance that looks nothing like the original creature/being. In my Legends of Origin sci-fi fantasy series, the magical ryokin’s physical appearance comes largely from the extinct sabre-tooth tiger – except the ryokin has golden fur with no stripes, and massive wings that enable it to fly. It’s also an intelligent, telepathic being despite its animal appearance. In the short story, Ereolon’s Day of Demons (part of the Sorcery & Subterfuge anthology), the main character is a winged elf – with ogre genes and the ability to bend others’ minds to his will.

Create something solely from your imagination. This can be difficult, but it’s definitely worth it if you do it right. You don’t need to add too many details either, if what you’re creating is a common animal that’s minor to your story. For example, I created a few animals for Wizard of Ends. There are gabbertok, which are dangerous night creatures with slanted yellow eyes that usually live in the woods. The females are protective over their young, but the males will eat their own offspring if the mother is not around. I also created ferocious hound monkeys, which have the bodies of hounds and torsos of monkeys, with sharp, curved teeth and deadly claws. They stand man height on all fours and travel in packs of ten. Each of these has a few more attributes, but nothing too detailed, because they are only there to add flavour to the story.

Visualise the creature or being you’re describing. It might sound okay as you write, but that doesn’t mean it won’t look ridiculous. Unless your story is humorous, you probably don’t want the visuals you give readers to make them laugh.

Consider how common fantasy creatures might evolve over a few million years and create the evolved version. You can use any creature/being from dragons and elves to ogres and unicorns, and everything in between.

When creating your fantasy creature or being, consider some of the following:

* Is it weak or strong? If it’s weak, how does its species survive? If it’s strong, does it dominate the region and, if not, why?
* What temperament does it have?
* Does it have any special abilities?
* What colour are its eyes and skin?
* What texture is its skin?
* Does it have hair? If it has hair, what colour is it, and is it soft or coarse?
* Is its kind social or solitary?
* How does it reproduce? Eggs? Live birth? Other?
* Where does it usually make its home?
* What does it eat?
* What do its teeth look like?

Also, when naming your creature or being, try to keep the name simple and easy to say. There’s nothing worse than reading a fantasy story only to be constantly interrupted as you battle to ‘say’ the name in your mind each time you read it in the book.

Thanks Vanessa, good advice to get started! Vanessa Finaughty’s new series, “The Wizard of Ends” is out this month and you can get them through the links provided here.

Wizard of Ends Book  I

A powerful sorceress wants the Queen of Ends dead, hoping her demise will render the king unable to defend his crown. Only the wizard Lashlor Leaflin is in a position to protect Queen Narraki Dragonsbane, but he avoids using magic – at almost any cost. With creatures of darkness hunting the queen, however, he may be left with little choice but to call on the power he holds within.

The Queen of Ends has been cursed into a rabid creature of darkness. Only Lashlor’s old flame, Rune Arcana, might be able to remove the curse. Lashlor believes he can find Rune in the

Mountains of Eclador. The only trouble is – Rune now despises him, and, in all of recorded history, no one has ever returned from these mountains. Fearing the Wizard of Ends will not be able to bring help, the king goes against Lashlor’s advice by enlisting the aid of other magic users.

Vanessa Finaughty is an author of many genres who now focuses on fantasy and science fiction. She’s published 15 books, of which 6 are fantasy. Vanessa grew up in Cape Town, South Africa, and still lives there with her husband of fifteen years, her baby daughter and plenty of furry, four-legged ‘children’.

{…and this is Vanessa on Fantasy}

Vanessa has always been passionate about books, and knew from a young age that she wanted to write them one day. She loves animals, coffee and the smell of wet grass, and hates liars, sweltering weather and long queues. Her interests include reading, photography, the supernatural, mythology, aliens and outer space, ancient history, life’s mysteries and martial arts, of which she has five years’ experience.