Good ideas come to me slowly, I admit that. Sometimes I’m staring one right in the face and nothing happens. I can use my writing, and my lovely wife as examples. 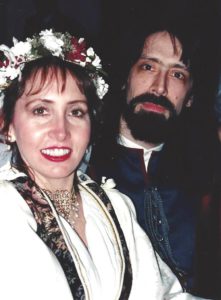 As to the latter, this was literally true. I met Dorie trying out for a play (she was musical director, so I got used to not being in charge right away and couldn’t have been happier). But mid-thirties, the usual folderol about marriage in the modern age. I was looking right at her (and believe me, when she got dressed up to play a show it was impossible to look anywhere else) for more than two years before I asked her to marry me. I made up for it by marrying her twice, and this should all be part of another tale, so for now just understand. Great idea. Took me awhile.

So this lovely wife of mine, she read one of my books a few months ago, the first one in the Shards of Light series (The Ring and the Flag). And she liked it. This was an accomplishment on several levels, but just get this one for now– Dorie is very busy. And I think she’s like a lot of readers today, there is just so little time to sit and read, even novellas like my series. I do some tooth-grinding and jaw-gnashing over that because I realized this problem, that epic fantasy books are way-long and readers don’t have time, so I thought I’d solve that problem by, duh, writing shorter tales. That plugged together.

No, the good idea wasn’t about writing a series. That’s everybody’s deal nowadays. And my series, compared to mystery or romance or pretty much any other genre, is stuck in low gear. I have three novellas done in the SoL series, and am working on the finale now. Not ten books, not fourt-frickin’-teen, not a goes-on-forever-if-you-like-Mr.-Big-Publisher-Guy. Four. And then we’ll see, but more likely than not pretty much done. In epic, stuff has to have meaning, come around; there’s a home-run at the end, but it’s a LONG at-bat, capeesh?

But my lovely wife, who like you has no time, kept lodging the same comment, about the first book and now about the second which I forced on her immediately.

“I have to keep turning back to remember who the characters are.”

Again, duh, why couldn’t I put these things together? Because slow, remember?

So the reissued Shards of Light books now have glossaries in the front. Good idea.

But I looked at my lovely wife, stuck on page 17 of Fencing Reputation for, like, ever. The old version, with no glossary. And I hated that. So I finally had another good idea.

I made a little book-mark glossary. See? 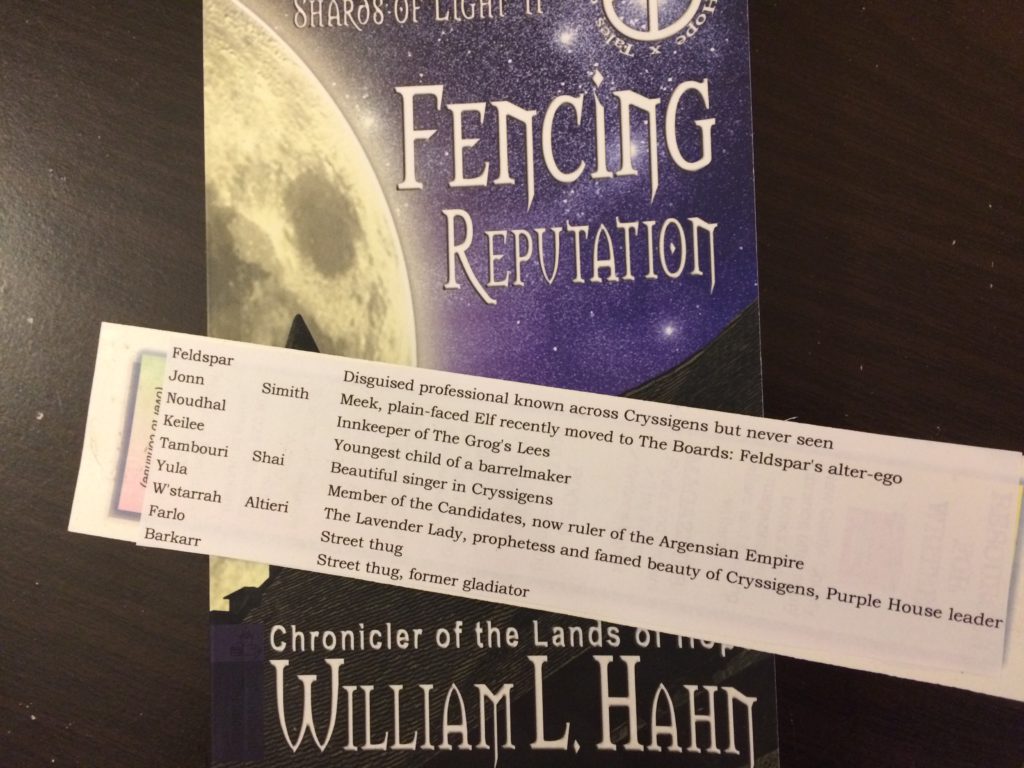 Don’t worry about reading the names, just go with me here. This is something that will hassle ALL my books, right? Lots of characters, book gets partially read then collects dust. So cast of characters in the front from now on, sure. But what about making book-marks with the same info?

Tell me what you think: good collateral, really make a difference? Or is epic just a hopeless case in the instant-replay world?

Put out character-cast bookmarks for each title in the Lands of Hope series? Give one with each copy sold in person, and maybe send a whole set to any reader for the cost of the postage?

VOTE IN THE COMMENTS BELOW. (It’s one letter, you can do this.)

a) Great idea, would make me want to read the one I’ve got or buy the next one.

b) Cute idea, not sure it would really help.

Almost forgot! New cover for Fencing Reputation coming out soon! How do you like that too! 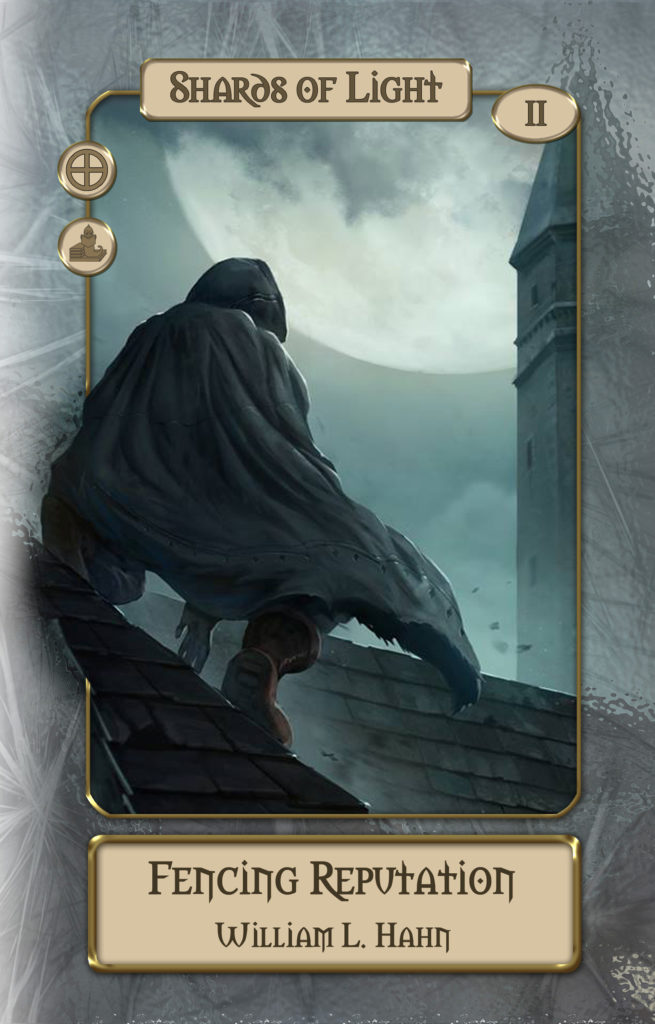 Almost everything about my chronicling work has been truly fun and rewarding. But this has to be one of the top three: when you’ve ordered another box of books and they come in. It’s a Christmas you make for yourself.

Based on sales in 2016 I had enough to order more copies of previous titles, including the long-awaited new covers for the first two tales in the Shards of Light series.

I had to wait a few days after the books came in, for my in-house model to schedule me in for a shoot. Then we got to work.

Then, of course, it was just glorious. Here, have a few thousand words each.

So now I’m stocked for the fairs and library talks ahead, and personally I cannot wait. There’s a real sense of accomplishment, having multiple titles, being able to match a tale to the request of the readers I meet. For now, the new cover for The Ring and the Flag is available on the Zon, with Fencing Reputation to follow very soon. You saw it here first!