Another new and likely irregular feature, I decided to issue occasional maunderings about the way the people of the Lands of Hope do things compared to here in the Alleged Real World. Because I’ve been looking at the place for a long time, that’s why, and because I can. I also happen to believe that nothing is truly unconnected; I know I’ve found pleasure in exploring the details of that world, and dare to think you will too.

Full disclosure on today’s subject: I hate gardening. I mean, a repelled and dismayed kind of hatred. My dad kept three garden plots around the house because that was his upbringing, but by then he was busy working elsewhere (a Master’s Degree will do that to you). And since gardens were outside the house, and boys did outdoor work… guess who. Hated with a passion, heated by teen-aged self-pity and heavily spiced with resentment.

And to this day, my lovely wife still gardens: yes, the yard is beautiful when she’s done and I like how it looks. But there are ten bags of cedar mulch and two of potting soil in the garage and I get depressed just thinking about it. She gets her brother to help her as much as she can.

Point- I am constantly looking at gardens and asking “why”.

And the people of the Alleged Real World definitely have an answer. Check these pictures I took yesterday from Longwood Gardens, about forty minutes’ drive north of us in Pennsylvania. Click on the photos to make them huge. {Seriously, do it once and then see if you can stop}

Not because I’m Ansel Adams, but because even a dope holding up his new tablet for the second time can get a decent shot of something gorgeous in a place like this. Everywhere you look, color and stunning arrangement, garden plots with themes, acres of fountains and stonework and blossoms. Next month, they’ll change it all out for something else. People come by the busload from all over the world to see Longwood– I turned to my daughter on the meadow path and said “I haven’t heard anyone speaking English in ten minutes”. But what does language matter? I’m pretty sure the words “ooh, ahh” are the same everywhere.

The people of the Lands of Hope don’t garden. Hardly any, hardly at all.

The Beauty You Find

To be specific, the next non-noble ranked person there I see who has any kind of designed cultivated plot will be the first. People of the Lands grow food, and when the time comes they eat it. Even the noble classes of the northern kingdoms have never assimilated the idea of moving, selecting, caring for and enjoying the

visual display of plants. You know those cute cottages where the weaver’s wife keeps geraniums by the window? None. The town square with its lovely rose bushes? Not here. By which I mean, Conar, Shilar and the other kingdoms of Men north of the Great Cleft.

In Mendel, where the Elven nobility have not just the wealth but also the centuries to appreciate beauty, you sometimes find that a flowering bush on a knight’s estate has been well cared for, perhaps weeds kept away. I have seen carpenters working with a surgeon, to puzzle through the way to splint a cracked branch on an ancient bole. But it 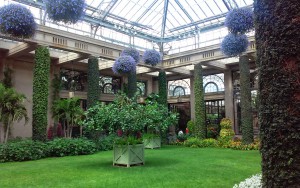 was always appreciation expressed for a plant the Children of Hope found growing there. Turning a roadway to curve around a five-hundred year oak is not gardening. And those nobles who like to keep the grass around their houses cut short? It goes to feed the livestock.

This absence of gardening derives from the deep, orthodox respect of the northern kingdoms for the words of one of their lesser-known heroes, Helmon.

The World-Wanderer walked to every corner of the Lands, according to legend, and had unparalleled communion with beasts and knowledge of the powers and uses of plants. Helmon has few chapels and does not figure loudly in the tales of old, but his influence was vast as seen here. The Children of Hope strongly believe that nature, without the curse of Despair which bent and wrecked it, is a force for Hope (it’s innately good, if you prefer). In a little-known disputation between Helmon, Mickhel and some of the other heroes, he first laid down the dictum that the natural world is not improved by the hand of humans. In other words, a flower found is much more beautiful than one planted. Unlike the ARW, there has been no dominion granted over the earth (though some of the heroes politely disagreed, and life today involves compromise). The willingness to delve and burn on a large scale is a chief sign of Despair. Hopeful kingdoms avoid what we would call industry.

Treaman, one of the heroes of Judgement’s Tale and in The Plane of Dreams, is a follower of Helmon as most Woodsmen are. He discovers what appears to be a garden of extraordinary beauty in the upcoming novel The Eye of Kog. Lost in the wrack of the cursed Percentalion he comes upon a fabled Glade of Wonder, and is able to commune in that place to achieve a miracle, one which helps to rescue him from despair at a crucial point in the tale.

In the chaotic Southern Empire, admittedly, there are noble gardens. A few. And again, it’s mainly Elves who design and tend them. Expressions of deep thought, usually reinforcing the standing of the ancestral line or perhaps to serve some

holy purpose. The Stealthic Feldspar moves through temple gardens in Fencing Reputation and has some understanding of the uses of scent and color to enhance the effect that the Stargazer sect has on its followers. In the upcoming novel The Test of Fire, Qerlak’s neighbor and enemy Pritaelseran keeps a magnificent garden, like other aspects of his foef a great luxury that some even among his overlords cannot boast of. He would not feel at all out of place at Longwood. In fact, he wouldn’t even feel jealous: I’m sure he would be disgusted that so many people were here…

And the enchantment of a place like Longwood takes my thoughts to the Lands in other ways. There are marvelous flowers there– some with magical properties– but the ARW also has wonders, such that I can’t say for sure the Lands has anything like them. Many common flora and fauna are the same– dogs, wheat, apples, crows– and that always makes me wonder whether there is a stronger, even historical connection. After all, Solemn Judgement DOES seem to come from somewhen in our world: the way he speaks of the nobles and war in Reunion of Souls is both familiar and embarrassing:

“Surely, this is so in the lands you came from?” Alendic asked Judgement quickly, another thrust.
The youth returned his gaze and shook his head slowly. “Nay, the nobles of my former home were always much occupied.”

“Were there kingdoms of Despair near to yours?” Natasha asked, and again Judgement shook his head. To Cedrith’s surprise, this confident and straightforward young man actually bit his lip.
After a pause, he said, “The nations… made war upon each other.”
“For Hope?” Alendic asked.
“For gain, usually,” Judgement returned matter-of-factly. “To expand this border against another, or to capture wealth in a port city or a mine.” His guests were shocked to silence, and Cedrith could see the youth struggling to maintain his composure, embarrassed to make such alien admissions in present company. “I had heard tell of battles fought to avenge a previous defeat, or in fulfillment of a debt. In some wise, the nobles fought… to keep in practice.”

Without more evidence I’ll never know for sure. If I watch for another thirty years, and I eventually see spiked bark and indoor deserts, what will it prove except maybe that humans are the same everywhere. Oh and BY THE WAY- why did Mr. DuPont set up Longwoods in the first place? Not gardening, he came to love that more and more over time. He bought the land there because a group of locals asked him to save the wonderful trees on the property, which would otherwise have been developed. So, who’s copying who, answer me that.

But it pleases me, in a selfish way, that so few Children of Hope had to pull weeds when they were kids. That, and gold and dragons, yeah not such a bad life over there.

Do the people of your worlds garden? Have you seen something here that really belongs over there? Would love to hear your feedback.

2 thoughts on “State of the Lands: Gardens”