Thou art wise to consider such a synthesis, Solemn. There are worlds aplenty, but only a single nature.

This concerns a subject I think is central to most genre fiction and especially epic fantasy, something that’s been tapping on the pane of my mind since I began chronicling. As an amateur military historian I was first drawn to the tales of armed struggles in ancient times. Now working as an analyst I’ve started to categorize things more often, try to get to the underlying causes. And after all, what could be more consequential to your tale than the existence or outbreak of a war?

So then– that raging conflict you’ve got in the background of your medieval mystery-paranormal romance: What’s up with that anyway? I mean, is there a particular reason for both sides to have been locked in a death-grip for the last four centuries, without result? You might want nothing to do with it, but hey, you made people start reading, now you’re stuck with us! Hopefully this article will serve as a handy guide to the many temperatures of tiff your world can get into. 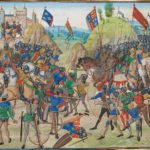 One thing that’s very important to distinguish at the start is that wars have causes (what Thucydides would call prophasis), which underlie (and even belie) the reasons that one side might give (the proschema). Sometimes these can be close to the same thing, but evil men need excuses (so the Dark Emperor might lust after the wealth or women of your hero’s homeland, but would loudly announce that said hero is a vile sorceror who must be hunted down). I’ve been surprised sometimes at tales where no such distinction is made, though this is strongly affected by the level of the conflict in your world.

I referred to this in a post a while back on the various types of fantasy. In brief, if the tale is 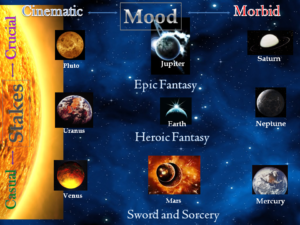 epic in scope, that means the world is at stake. This strongly indicates that the bad guys are outright aggressors and neither give, nor have, a good reason for their violent attempt. If Sauron wins, it’s game over for all Middle Earth: curtain down, no more history. He wants it all, because he wants it. Not a lot of wiggle room there. {In heroic fantasy and sword-and-sorcery tales, stakes are lower with much more room for doubt, equivocation, confusion and half-measures.}

Why would an author pass up a chance to explore the casus belli (meaning the triggering act, the stated reason for a war)? No way I could exhaustively list them, but let’s take a stab at some important ones, both from the Alleged Real World and the tales folks have written about other places.

Here’s how I would represent those Greek words I mentioned before, about the real cause and the stated message: 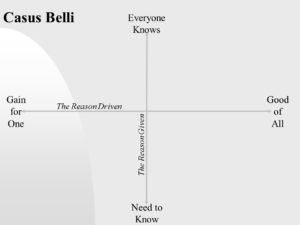 Doesn’t Have to be Complicated

So in the example of Middle Earth, Sauron just wants to conquer everything. It’s possible that his Orcs and evil Men will enjoy life after his victory, but for the most part it’s all going to be his way or the highway. And by the time the war is well underway (The Fellowship of the Ring), Sauron is no longer hiding his intentions, pretty much everyone knows what he wants and the heroes are only arguing about the best way to oppose him. So that maps the War of the Ring–and many other epic fantasy struggles–clearly into the upper left corner. 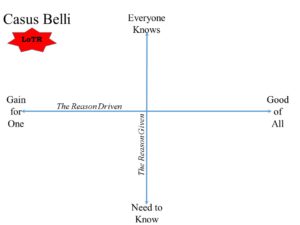 Let’s try a tougher one, the German invasion of Poland that started WW 2. In truth, it was naked aggression, invasion of a weaker neighbor to gain lebensraum and secure more power for the Master Race. But the Nazis used their mastery of (and addiction to) propaganda to mask their evil intentions with a staged provocation. Or didn’t you know that the Poles actually invaded Germany first? Usually called the Gleiwitz Incident, the Germans used concentration camp prisoners and stolen uniforms to make it seem that Poles had come across the border and attacked several targets, including a radio station from which they presumably broadcast an anti-German message, thereafter being conveniently shot before authorities could arrive. Not that it cut much ice with the Allies, who appropriately called B.S. within days. But the war was on, and even most Germans had no idea what was really happening (and honestly, many did not much care at that point– but if they had been completely on board, why all the play-acting?). 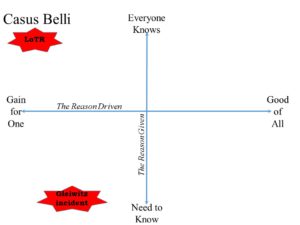 See how it goes? Think about who really gains from starting the conflict, that’s your left-to-right axis. Then consider whether lots of people, or only a few, really know the true reason or if they’re fighting (perhaps bravely, probably tragically) under a false flag. This one distinction, between prophasis and proschema, by itself could give you a wonderful point of departure for traitors, surprises, disillusionment; in the end I believe it could bring your tale a greater level of heroism.

I’ll try one more and then beg you for advice about a fourth, but hopefully you can already use the blank graph at the top of this article to plot the position of your own wars.

Noble Causes and the Eye of the Beholder

In the American Civil War (yeah, going to step right into the hornet’s nest, why not?) we have a prophasis problem because historians and pundits rage unabated about what REALLY caused the war. Slavery? State’s Rights? Cultural division between North and South had been growing since the Revolution, and as the Southern states saw the balance of power in Washington swing away from them, they banded together to protect their way of life (including of course, their “peculiar institution”).

To the Yanks, a small group of Rebel slaveowners fought to retain their power, and sold 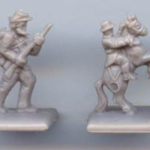 their people a bill of goods about preserving their liberty.  On the other hand, “to free the slaves” might have served as a good reason for Northerners to don a uniform (and wealthy Yanks were happy to have the plantation power destroyed). But it’s hard to swallow that thousands of Confederates risked their lives just so the wealthy few could continue to own them. That would be like you and me dodging bullets to protect Bill Gates’ right to keep winning the lottery. And remember, hardly anyone in mid-19th century America believed that blacks should be accorded an equal’s place in society. Lincoln included.

So I’d say the American Civil War could have several plot-points, depending on whether you’re covering the conflict from the Northern or Southern PoV. 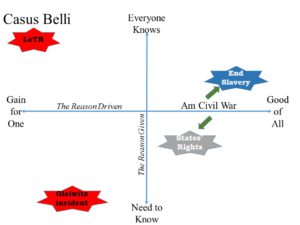 In a war, each side tends to swallow its own message as the reason for the fight, and dismiss the enemy’s reason as propaganda. And guess which one gets to write the history?

Final Exam: Mordant’s Need is Also My Own 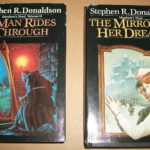 There are two kinds of people in the reading world: those who already know how mortally cool the Mordant’s Need series by Stephen R. Donaldson is, and those who need a time-out. Don’t be someone who needs a time-out. But if you want me to tap dance on the Spoiler Line, here we go. Just remember, you owe me a plot point when I’m done: tell me where the war goes on my map and why.

The kingdom of Mordant is under siege by the army of the High King (a neighboring empire). The king of Mordant, Joyse, has become senile and refuses to allow any other nation access to his Congery, an association of wizards who “do it all with mirrors” and are the only center of sorcerous power in the world.  All nations have suffered attacks by monstrous creatures, perhaps summoned by a rogue Imager who cannot be traced. The High King’s emissary demands that Joyse hand over access to the Congery so they all can be protected; in response, the insane monarch of Mordant challenges him to a game of checkers, which the emissary does not even know how to play.  That interview does not end well, and the war is on. 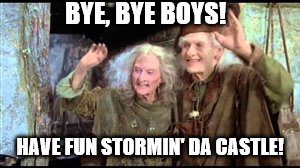 So. Plot that! And enjoy thinking about the different driving forces that send your heroes into battle, I hope you come away with some good thoughts to sprinkle into conversations and the central action of your tale.