By now, you’ve probably got this whole thing wired. You build the world of your story sneaky by knowing which information is vital to the reader’s casual eye, by limiting how much you whack them with at one time, by keeping the information in a useful, interesting, and compelling context which ideally serves a second purpose (such as adding tension or doubt) at the same time.

But if you’re all done spit-taking, I want you to think about one last thing. And if you found this series useful, I’m betting you are likely already doing it. You can’t have achieved this much precision about what to show, when and where, without also having made a decision–perhaps unconsciously–about the character delivering it.

THEY Need to Know Too!

It would be not worth mentioning if it weren’t so crucial. The true omniscient third-person voice is a rarity these days (I think it’s one of the hardest): most genre fiction writers realize the tremendous advantages inherent in selecting a more personal point of view. First and second person speak for themselves (Genius! I kill myself), but the sympathetic third person–the one so many tales  are written in today, confronts you with a choice as author. Which of your characters should be the vehicle you use to bring the world to your reader?

The main character will often be the right answer. But always? What about some part of world-building that he or she should stay unaware of, some secret plan of the enemy or a fact that reveals whodunit.  I’ve read plenty of tales where the author changed point of view too often, “head-hopping” through the entire cast as if from a sense of duty, and giving us a two-sentence flash of how everybody’s feeling. Worshiping at the altar of Tell, instead of having one person scan the room and pick up on the signs that give us the same knowledge.

“A strong voice and good storytelling fills the reader with confidence, reassures them that everything has a purpose.”

But you can also see the opposite, when one character carries you through some bit of history, thinks about a prophecy or tries to assemble the clues, etc. yet gives the reader that uncomfortable sense that we’ve overstayed our welcome. Why are we here? What sympathy or relevance do these thoughts and feelings have for us at this point? Why is this character thinking about such things right now? That’s when the reader becomes suspicious, breaks the tapestry and spots the camouflage you’ve been erecting.

In other words, picking the wrong character can wreck your attempt to world-build just as surely as putting a phone book of genealogy out there by itself between two sentences of an argument. So don’t do that.

One common and effective tactic to handle the Who of world-building is to choose an ignorant narrator. When they don’t know, it can immediately forge a bond of sympathy with the reader. They have a companion now, another character in this little boat piloting the unfriendly sea of your world. They share an important need, and learn (hopefully without realizing it!) about this new place as they voyage together.

Can it be overdone? Oh hell yes. One key for using ignorant narrators is to remember that they are still characters– you need to make them admirable or sympathetic in some way, because nobody wants to be cast adrift with a milksop or a perfect Mary Sue. My favorite example of a famous ignorant narrator is Doctor Watson. He and Holmes head out to the

scene of the crime and you just KNOW Watson is going to miss it. Whatever that clue is, the smudge or disarranged paper or something that Holmes stops and looks at a moment, and then declares to be “probably nothing”… ah, THAT is where the action is. But Watson almost never gets it. He sees everything you do– in fact, he sees everything Holmes does– but you can use him as a near-perfect negative barometer. Holmes, of course, says nothing about whodunit until the very end, the stuck-up prig. Watson, when asked, always gives his view and it’s just about exactly wrong. The reader can use that to help deduce what’s more likely to be right, and while you might not catch up to the great detective, feeling superior to his sidekick pushes you further into the story and engages you. Elementary, really, and brilliant. But don’t forget, you LIKE Watson– he’s brave and loyal, domesticated and decent. Nobody marries and lives with Holmes.  It’s a classic example of how to , whoops, show the story. With the right character. 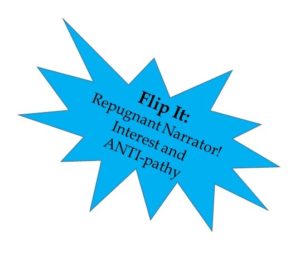 Notice you can also flip the script by choosing a villain to narrate. The reader should hate the character, thus gaining a sense of what NOT to root for, and so on. Like Watson, but without the pipe and niceness.

Our hero awakens in a hospital with his limbs in casts and doesn’t even remember his own name. He feels as if his legs aren’t broken, so he shatters the casts, rather easily beats 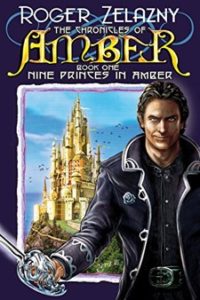 up the thugly orderlies, and leaves. Corwin is the most classic of the ignorant narrators and a brilliant example of the line between the worlds. Starting out in the ARW, he pursues shady wisps of his memory, all the while displaying clear evidence to the reader–but not to himself–that the default setting for everything is under a caution flag. He’s too strong, he unconsciously behaves in a regal fashion. As Nick Fury so famously said of Loki, “He’s… not from around here.” And we discover this before Corwin does, in a way that presents constant threat, deep uncertainty, and raises our interest in the narrator’s success. I suppose this book gets tagged as a sci-fi/fantasy classic, but like some of my other examples it has elements of several genres (in fact, ALL genres!) blended into it. You don’t have to take in the entire series but the opening book is a bible for world-building done right and the tale just whizzes past. I’m so glad Mr. Zelazny is a time-traveler and came forward to read this series before writing it…

Writing Exercise: The Who

I can’t surprise you anymore by this time. Return to the Writing Exercise- look at that roster you wrote down and try to jot next to each item a name or character type who should be the one to bring it to the reader.  Should it be the main character, or a soul-mate, an authority figure, some kind of facilitator? And should it happen through thoughts (meaning, a sympathetic voice like first person)? Or with speech, or just hinted at in the way their actions are described? Spend a couple minutes trying to populate your list. Who would have these thoughts, based on what they need or desire?

Now, look at the results. You should have a nice list of things vital to include in your tale, a sense of the order to introduce them, an idea about the origins of this information (and maybe even some “raw material” to draw from!) and now a vision of which character will be bringing the news forward. Brava!

You’ve got it now. The reader will have no chance to avoid the world you build for them, in fact, they’ll be eager to know more. Not by learning it! No, your tale was far too interesting and well crafted to have taught them anything. They just saw it, experienced and enjoyed it. They feel a part of it now, and will boast to their friends just like the tourist who went to Bangkok for three days and is now an expert on Thailand, and Buddhism, and Asian food…

All World-Building is Really a Whodunit

I can only hope you’ve enjoyed reading this series as much as I did crafting it. I probably sounded way too sure of myself, but I wanted to be encouraging and give you hope about a subject that too many authors despair of. Remember: your judgment must govern the process, and all rules can be broken by those who know why. If you don’t find resonance in what I’ve said, feel free to print out the entire series, wad it up and lob it in the trash. But don’t pretend the Patience Horizon doesn’t exist; don’t light that candle with a flame-thrower. Charm the reader into your lands and they won’t just put up with the build, they’ll run to that horizon and hold it up like Atlas to learn more.

Let me know your experiences and any questions you still may have. There are countless worlds out there, and you are the ARW’s leading expert on at least one of them! Let’s hear from you in your next published tale.

2 thoughts on “Sneaky World-Building Part 6: The Who”