If you’ve accepted the possibility that some of what you are telling the reader about your world is hurting your cause, honestly congratulations. We love what we’ve learned, and love can never lead you wrong. You considered that some of what you know might have to sit the bench. But there’s a lot left to , whoops, show them in your tale.

Give a Little Bit

You would have to be very old to get this joke. But it’s the phrase by Supertramp that ends with “… of your love to me”. And I say this with full knowledge of what I told you last time. I told you the Patience Horizon is finite. I warned you it’s shrinking. And all that is absolutely true. You cannot wait forever to tell them about your world. The beta-readers who always carp “can’t this bit come later?” are profoundly misled.

But you can’t tell them all at once. Remember the Two-Sentence Rule, that one I just made up. Seek instead to show as close to the minimum you can in any given place. And that means, among other things having to prioritize what bit of info goes in first.

Another thing, a piece of advice which will come back in several closely related forms in this series. World-building is an activity where it is DEFINITELY better to show than tell. What that means here is, when you are prioritizing on the exact order in which you dribble out the background, the flashbacks, the other-worldly common knowledge, it is always better to “act it out”, to give characters statements and deeds that make sense for them and just so happen to impart the crucial information the reader needs.

Yes, I’m a Reese’s guy. So sue me. But unless you’re allergic to the nuts, this could be a revelation for you too. Holding back, dribbling out hints and tantalizing clues a bit at a time, fits perfectly with showing what makes sense for your characters and the plot. It creates in the latter case a better flow, which is more engaging and interesting to the reader. And the former, to give a little bit, also creates a sense that there is a strong hand on the tiller here. This author knows what she’s doing, I can trust her.

Interest and trust are the primary ingredients of the Suspension of Disbelief. THAT is what will make the reader turn to her logical side– the part squawking about how dragons could never fly and light-sabers break all the rules of science we haven’t even discovered yet– and say to that logical side:

In Exemplum Gratia: The Mirror of Her Dreams

This two-book set (diology? bigraphia?) by Stephen R. Donaldson ranks as the very best heroic fantasy tale ever written in my view. Terisa’s wealthy father gives her every financial, physical need but completely ignores her. She wallpapers her apartment with mirrors in a desperate effort to counter the haunting suggestion that she does not, in fact exist. 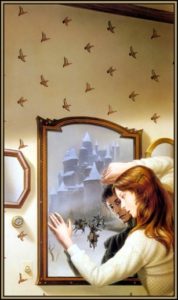 Suddenly one day she looks in a mirror and sees instead a handsome fellow, who abruptly comes partway through the glass and holds his hand out to her, saying “Please, you must come back with me. Only you can save the world.”

Terisa takes his hand and finds herself in Mordant, a world where all magic is done with mirrors. So obviously readers are going to need to know much more about this. But Donaldson’s mastery of the subject is ironclad. There are immediately several obstacles, embedded in the plot and characters, that make it impossible for him to “tell you about it” in any kind of lecture-format:

All this while mysterious enemies are attacking the kingdom, and the king himself is clearly a box of Froot Loops, no good to anyone.

As a reader I was practically shouting with eagerness to know more, and paid extra attention to every development, every new character partly in hopes of picking up a clue. SRD put SO MUCH into this tale- it’s romance, it’s adventure, heroic fantasy at its finest. Read it or fight me.

Writing Exercise: the When

In the previous lesson you wrote out a list of several things you know readers must find out about your world. Pull out that list again; take a few seconds and ask yourself- is this list, the way I wrote it, in chronological order? Can you rate the urgency, in other words, with which the reader must be informed? See if you can number your list.

It would be interesting to know that the way the thoughts occurred to your mind last week either were, or were not, in this urgency order. And if you’ve drafted part of your tale already, you can of course check to see if your list matches what you wrote. Finding a difference won’t tell you whether the draft or the list is in error. Just something to think about.

Be a Tour-Guide, not a Teacher

You can’t know how much it hurt me to write that header. But I meant what I said earlier- the reader is here to experience your world. Not to learn about it.

Stay out of the classroom-image: knowledgeable, respected teacher (go with me here, it’s my fantasy) holding forth in brilliant prose with the occasional pause to advance a slide or mark the board. Students in neat rows, taking notes and gasping with revelation.

Hold as your image the loud, funny American tourist. Remember, they paid their money to take this trip. Picture them, going “wow” at all the sights, completely ignoring the tour guide after a short phrase or two- say, two sentences?- and blundering off the course to look at what really interests them this instant.

“What’s that? Sacred ground? Ooops, I had no idea.”

“Will you look at that Ethel! Let’s follow them- oh, tour, schmoor, over there is where the action is!”

You know these people: they believe their money entitles them to a great experience, and if they get bored or confused they blame the guide who brought them.

But you can handle them.

“Here we have the famous Haunted Goddess, rumored to exact a horrible revenge on anyone who touches her without permission. There’s a gruesome tale to tell about this, perhaps at lunch after you’ve seen the rest– DON’T have the sausage!– but right now I must show you the fountain garden. And we’re walking, we’re walking…” 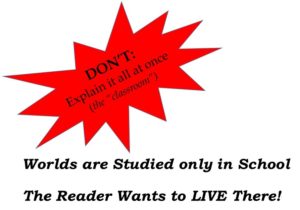 You so got this. Put the world-building data in an order, release a little at a time. Sizzle before the steak, and they’ll be screaming for more.

Sure, sure, but exactly HOW you ask? And I’m so glad you did. You will be too– Next week!

Love to hear your comments, let me know how it’s going.