Having been tapped by my illustrious, if almost painfully succinct colleague Kirsten, I am happy to participate in the Blog Hop du jour today. If you were checking in for another installment of It Figures, I’ll bring that back in next week (have to wait until it’s a Miniature Monday). Kirsten intimated that my post would likely run long, which naturally stirred up all the contrary spirit in me. So I guess you could say this post is about as short as I can make it… yeah, epic fantasy that’s my thing.

Here’s one of the heroes of the current tale, including a few details about him not currently in it.

What is the name of your character? Is he fictional or a historic person?
Treaman is one of the chief characters that figure into Judgement’s Tale. I’m sure he would insist he is completely real, but as a point of order he does not inhabit the Alleged Real World, no.

When and where is the story set?
At the time of the story (1995 ADR), Treaman’s party is moving about inside the 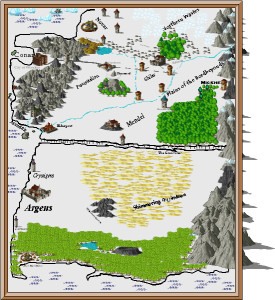 Percentalion, a central kingdom in the northern Lands of Hope. The Age of Peace—also known as the Empty Years—is coming to an end, and the work of his band of adventurers is one reason why.

What should we know about him?
Treaman is a Woodsman, one of the established pursuits among the adventuring class. He was born and raised on the frontier of the far-north Novar colony, which is snowbound more than half the year, and learned much of his skill with outdoor survival there. One day when he was 18, Treaman decided he had suffered the cold long enough, and simply walked south (as no one was known to have done in recent years) all the way across the Snowdon Hills and into Shilar. That solo trip of more than a hundred leagues was a test of fire, only with ice in it. Just surviving proved his worth to himself, and Treaman began to hunger for greater challenges. In one of the smaller cities of Shilar he fell in with Bildon the Halfling Stealthic, and agreed to join with his adventuring party under Haltar Eltrinstar. {Like most common folk Treaman and Bildon have no surnames.}

What is the main conflict? What messes up his life?
Treaman finds the burden of the party’s expectations agonizing. No one can safely navigate across the cursed land of the Percentalion anymore, and it’s only getting harder with time. In previous years, a skilled Woodsman was enough to make it, but Treaman can only see that the way is getting harder to find and he isn’t sensing the magic answer. Meanwhile the party waits on him, lost, and he feels terribly responsible. 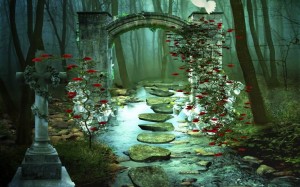 What is the personal goal of the character?
Treaman is willing to risk his life trying to guide the party, and taking whatever adventure comes with it, in order to get closer to the wonder of the Lands. Even here in the Percentalion he is struck with amazement at the wild terrain, its unpredictable weather, and its incredible monsters. He is beginning to sense that there is much here for someone who can truly feel at one with nature, and he seeks every opportunity to further that. Plus, the warmer weather is a bonus!

Is there a working title for this novel and where can we read more about it?
Treaman appears in the novels Judgement’s Tale and The Eye of Kog which are coming into publication right now.

When can we expect the book to be published?
Part One of Judgement’s Tale, entitled Games of Chance is on sale now at Amazon. Part Two, Strength of Conviction will be available at the end of September 2014. The rest of the saga unfolds every few months thereafter and you’ll read much more about Treaman’s character before it’s through.

As per the honored tradition it is now my job to nominate others to participate in the hop. I move that the two marvelous indies I’m reading now step forward. Matt Graybosch, please tell us more about someone from the Starbreaker series. And Jenni Wiltz, how about a peek at whatever character you’re working on for your WiP? Finally, you never know unless you try for a home run- how about Anne R. Allen, can I tempt you to tell us more about one of your characters? Rest assured readers, if you pick up any book by one of these three you will be in very good hands.