It’s been awhile since I’ve had something to talk about on this blog–the gig economy has brought me the odd adventure here and there like Mystery Shopping or prep for a new class at school this fall. But on the tale-telling front, I’ve been deep in the throes of two very different projects this summer.

I mean, not sure how they could be any more different. A less foolish man would probably break this up into two posts, but I’m already begun so heck.

I was very excited to win an audiobook project on a new platform, this time Upwork. There’s a whole ‘nother post about trying to hang your shingle away from Audible. Please don’t tell them I’m sneaking around! Actually, matters on Audible seem to have dried up rather radically in recent months, so getting this job was a boon.

And what a story! Crow Country is near-future dystopian and without giving away too much, let me just say that the crows are not the heroes of the story. Themes of the Wild West, a bit of sci-fi/fantasy, hopeless love and some of the most gruesome fights and descriptions I’ve ever been given are peppered through this tale. But nothing really defines it. The prose is just fabulous, set in an area the young author knows well but taking a flight of imagination I would never have credited possible at any age.

Revisions and Other Heroic Deeds

The voices and FX were a challenge as usual; but the FEEDBACK. Both the author and 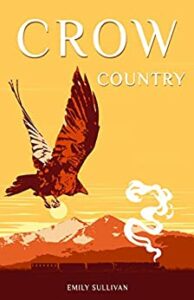 publisher had detailed input to every chapter I posted. I began to establish a rhythm in my daily recordings–look at punch-in requests from yesterday, record a new chapter or two, then upstairs to polish the first and produce the second. Hang them up for feedback, check for new input, make notes, etc. It’s a big novel with thirty-plus chapters and there was traveling (plus involuntary snoozing, more about apnea later) scattered all over the weeks. My point–I began to get into the routine of narration, like I always pictured it being, the actual daily work.

Crowing About the Outcome!

And I loved it. Like I thought I would, but in a way I’ve seldom experienced. The work is still occasional, and my recent authors have generally been quite happy with my first attempts. I knew deep down I wasn’t getting a real test of how I could do at this. For that you need feedback.

And I got it in spades this time around. Good, constructive notes, praise, requests for revision sure, but also just questions, discussion. A couple times I mentioned why I had tried this echo or that sound, and they went back, listened again, changed their minds. Other times I did, and gladly.

I’m as proud of this work as any I’ve done and I can’t wait for you to hear it. But we have to wait. For reasons that are super-cool, Crow Country will be released on October 9th. If you like to take it in with your eyes, you can preorder on Amazon now. I’ll update this post with the audio link whenever it becomes available.

My Other Project- a Children’s Book! 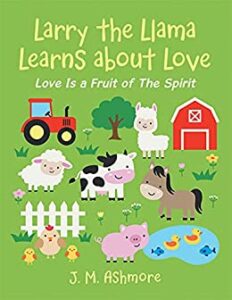 I was also contacted by Christian children’s author Janet Ashmore, who has the first of a series of books out now, entitled Larry the Llama Learns About Love. I knew her through working for her husband David for whom I had narrated several police procedurals. Janet was hoping I could give her some advice about how to take her text and pictures into some kind of read-along format. And I thought to myself “well, you narrate audiobooks, and you watched your daughter win Superior awards reading children’s literature, and you know a thing or three about animating PowerPoint”. So I said, “give me a crack at it and see if you like the result”.

And she did. And did! It’s on YouTube and I’ll embed it here, about 9 minutes. Totally free in this format!

I had more fun than I can tell you, playing with various animations and always trying to recall how it would be for a young person to listen to Genna reading so sincerely and with such spirit. I believe the job called for a variety of skills, which I happened to have, and thus again I was quite proud to think I could work in this way. If you’d like your own hardback copy of the story, you can find it here. It’s in e-book and paperback too.

I won’t say there weren’t moments when I felt a little dizzy, gyring between these two projects. But variety probably helped much more than it hurt, and hey, gig income is never unwelcome. I’ll be back at school in two weeks, so it’s the perfect time to wrap and announce these two very different jobs as I begin to plan opening day presentations and dust off my dress shoes.

That’s what I did this summer: I answered the question “what could possibly be the same about a crow and a llama”.