Because in the end you need to show, not tell

Hand over my heart (still there, thank goodness!) I did not think what week it was until I started writing this post. How gruesomely appropriate, that some deep-slumbering portion of my consciousness thought “yeah, and after the covers, take a week off and THEN do some of the Undead”. As I always say, it’s better to be lucky than good.

The Lands of Hope have been blessed, in that the evil races and nations once 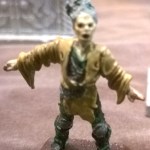 controlling it were ejected two thousand years earlier. Not surprisingly, adventure and peril were thin on the ground until recently: but the one threat that has always, if distantly, been there was the curse of Undeath, discovered in the first days of Hope’s battle against Despair and today something their descendants can never be sure has been exterminated. As the half-mad sage Faltus Fanem makes clear in his journal– aptly titled The Nameless Tome, as excerpted in Judgement’s Tale— it is really a plague of fear, which the liche-thane Wolga Vrule discovered and spread to the dismay of all succeeding generations.

Today I shall focus on what Fanem called First Form Undead, including skeletons and gaunts. These unfortunates have had their physical bodies pulled back to animation after death, and forced to do the bidding of the necromancer. In the absence of such instructions they generally await orders, moving only to destroy any living thing that comes near.

First, because as I mentioned Undead beings are among the only challenges the current heroes of the Lands face on  a regular basis. Necromancy confers powerful advantages on the sorceror, enough to make one question whether the scales are fairly balanced (and I cannot answer that question with any certainty). No matter what a being wants, whatever their record of good deeds in life or their desires after death, it was possible for an enemy to drag their corporeal form back into servitude as First Form undead. The length of time since death certainly does not matter; and once created, the servitors evidently last for all time until destroyed. No ongoing strain for the summoner, no limit on the number summoned, no value-added taxes, and no union strikes. Makes me want to climb a tall set of stairs, bang on the door and demand to know who the hell’s in charge of all this.

But more than that, undeath takes advantage of the innate horror all Children of Hope have, of death and what lies beyond it. The supreme irony which Vrule discovered is that this fear is precisely what makes people vulnerable to being raised in the first place. And once the living catch sight of gaunts or skeletons shambling their way, the fear is guaranteed to last their remaining lives. Thus Fanem spoke of Vrule’s cursed discovery as a “plague of fear”. Very few resist it.

Skeletons, as the name implies, are just the bone structure of a former being; usually raised after a long period, skeletons also form if the necromancer summons a being whose body was burned (it appears to be somewhat harder, but not impossible to do this– thus the precautions of Hope in cremating the dead are not much protection). Skeletons, once chopped sufficiently, lose spiritual and bodily coherence and do not 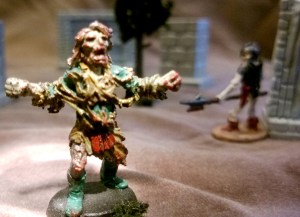 rise again. Gaunts, however, are another matter. More freshly killed, for example in battle, gaunts have flesh and organs– particularly the heart, which the necromancer uses to create a more lasting impression. Gaunts need to be cut into pieces too small to do harm before the threat is quelled; that, or destroying the receptacle where the summoner has stored the hearts, are the only way to succeed.

These are by far the most common undead of the First Form. Briefly, there have been scattered reports by untrustworthy adventurers of mummified beings (buried in the Bedou-uu fashion) which are similarly mindless but possessed of unusual powers to repel Hopeful beings. And by “repel” I mean they can strike a full-armored Pious Warrior and generate a shock that hurls him bodily across the room. Tentatively called “Raps”

(also spelled “wraps), there is much more research to be done in this area, one in which the Sages are far more enthusiastic than the adventurers for some reason. And then there are Ghouls, awful beings which make an appearance in The Eye of Kog (next year); in short, they only think they’re undead.

At some later date, when I’ve got my courage back I may show some of the Second Form undead, who tend to be either incorporeal or who have significant control over their own actions. The Lands occasionally see vampires, ghosts and revenants– oh my.

No huge changes this time. My expectations keep rising, and I’m once again becoming frustrated that  I can’t get close enough (but now I’m trying for a face-shot without cropping in post). I couldn’t seem to get the proper sense of dross, dried blood and rot to show, so I turned off the main overhead light. And I “settled” for some out of focus, both background and foreground, to hopefully heighten the mood of ick. 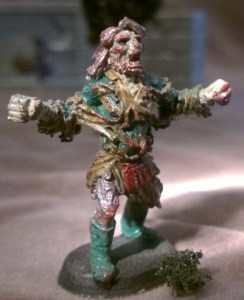 The larger gaunt is one of my favorite figurines because he’s clearly a former Child of Hope gone terribly wrong. The Southern Empire, scene of The Plane of Dreams and the Shards of Light series, had become fairly decadent in the past two or three centuries. Some of the noble classes fell for a fad of “daring the demons”, by refusing to cremate on their deaths but to be buried instead, as Despair always did, in secret kemetaria. The Stealthic Feldspar discovers one in Old Cryss during his investigations in Fencing Reputation:

To my left in the nook of the next corner was a small area ringed with a low, two-foot fence of metal spikes; I caught only a glimpse of the irregular rows of stone markers within and turned my head away with a snap. I had heard the stories, but hoped like most children that this one wasn’t true. No such luck- they had really done it, those grand fools of long ago. So proud, so eager to show their spirit even in death, they had built a kemetaria, and allowed their bones to be put under the earth- an added challenge for their souls, to rise despite the odds and still attain heaven. Confident and sure, they had put their flesh into the ground, like the children of Despair. No wonder death had rained down on this place.

This dope was one of those, I don’t doubt, and thus deserves whatever happens to him. I picture him like this, richly dressed and fairly intact, as bereft of sense now as he was in life. Whether he actually rises and stalks the world, I won’t yet say. 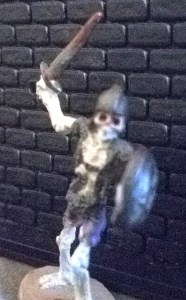 I hope you enjoyed this Halloween treat; perhaps this sight, or something coming up during trick-or-treating, will inspire you when it’s time for your heroes to face the undead. As the wise-mouth Alendic says to Cedrith in the upcoming conclusion to Judgement’s Tale:

“You see, with the undead, it is very simple: either you beat them, or you join them.” “You make the situation marvelous clear,” Cedrith managed, and Alendic laughed, quite literally in the face of death.

Join in here with your comments and feedback. It’s fun, and much less damaging! {And if your heart’s not in it… well, what are you?}