Because in the end, you need to show, not tell.

Here’s how I solve a dilemma. My new book coming out on a Miniature Monday? No problem– just take pix of the main character. So before I dive into the rabbit-hole of my nemesis-in-lead, let me just mention that today Judgement’s Tale Part Two, Strength of Conviction is now on sale at Amazon. And if you are trying to catch up on the series, I’m pleased to announce that Part One, Games of Chance is free until October 1st! I hope you’ll take advantage of this opportunity: the Judgement’s Tale saga is the true origin of adventure in the Lands of Hope, and most of the chronicled canon comes later in time than these days.

Solemn Judgement, the protagonist of Judgement’s Tale, comes to be known across the 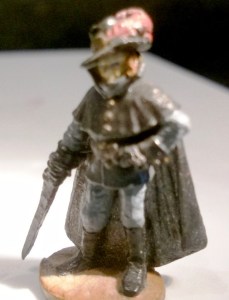 Lands of Hope as the Man in Grey. Orphaned by his father’s death in the moment of his arrival, Solemn tried to follow his sire’s teaching. He quickly became interested in the question of death and whether it is “the true end”, for obvious reasons.

But this is an issue that the Children of Hope have not been eager to explore in the centuries since their heroes left the Lands. Throughout Judgement’s Tale, Solemn pursues this and other mysteries, never taking the easy path and winning few friends. Though still a youth, he has already become hard within and without, seldom showing a sign of the terrible aloneness he suffers, evidently by his own choice, his refusal to compromise. Slowly, imperceptibly, the world of the Lands begins to turn on the decisions made by a grim and inflexible youth, universally thought to be much older, and far less good, than he truly is.

There simply had to be Solemn Judgement; I cannot explain his presence any more clearly than that. I saw him before I saw the Lands of Hope themselves- he was an image 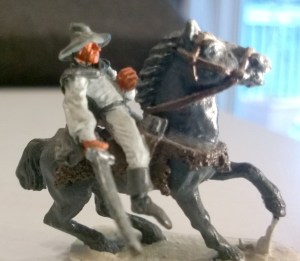 stalking my brain, resolute to do what he thought was right and indifferent to how he was treated by others. That first year, when I saw only him without any context, I’ll be honest– he scared me. I thrilled to his competence and wide-ranging knowledge, but I thought– because I always saw him facing danger and speaking only to his foes– that he was a man devoid of mercy or humor. 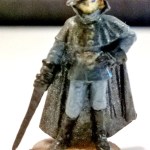 As my knowledge of the Lands grew, I realized that of course the kingdoms were filled with good folk, nobles and peasants, adventurers and homebodies who were dedicated to the same principles as Judgement– yet they almost universally rejected him, and it was hard for me not to see their decision as deliberate. Truth to tell I wasn’t sure they were making a mistake; Judgement was just as intimidating as admirable. The Man in Grey was an interloper, appearing in many different tales of Hope but never someone people wanted to follow. If I hadn’t finally seen how Cedrith Fellareon doggedly befriended him at the beginning, before his infamy, then Judgement’s Tale might never have been told.

This much meaning in a single figurine proved beyond the reach even of Ral Partha. 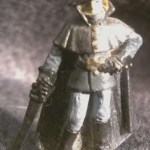 But I did find a set of two figs that seemed to capture a little of what I had seen in him. The hat and cape are nearly right, the boots and belt. The foot figure has the row of buttons nearly correct (should be double breasted, not single). But the cape-closure is more accurate on the horse figure. And I believe the shirt on the mounted man, beneath his doublet, would be laced like that.

The plume, to my knowledge, is an affectation Solemn never succumbed to; nor do I think he ever stashed his quill up there, which would be impractical. The doublet, mismatched gauntlets and most importantly the cold-iron-banded quarterstaff are missing. The sword– in both figures– was a weapon Judgement specifically disavows, saying his father forbade it to him. And while he did care for horses briefly during his multiple apprenticeships in Conar, he never learned to ride. Still, I think the face is about right, clean-shaven and weathered and serious. He looks older than he is, at least during the time of Judgement’s Tale (in The Plane of Dreams, seven years have passed). But Solemn always LOOKS older than he is. When he landed in 1995 ADR, he was merely fifteen. 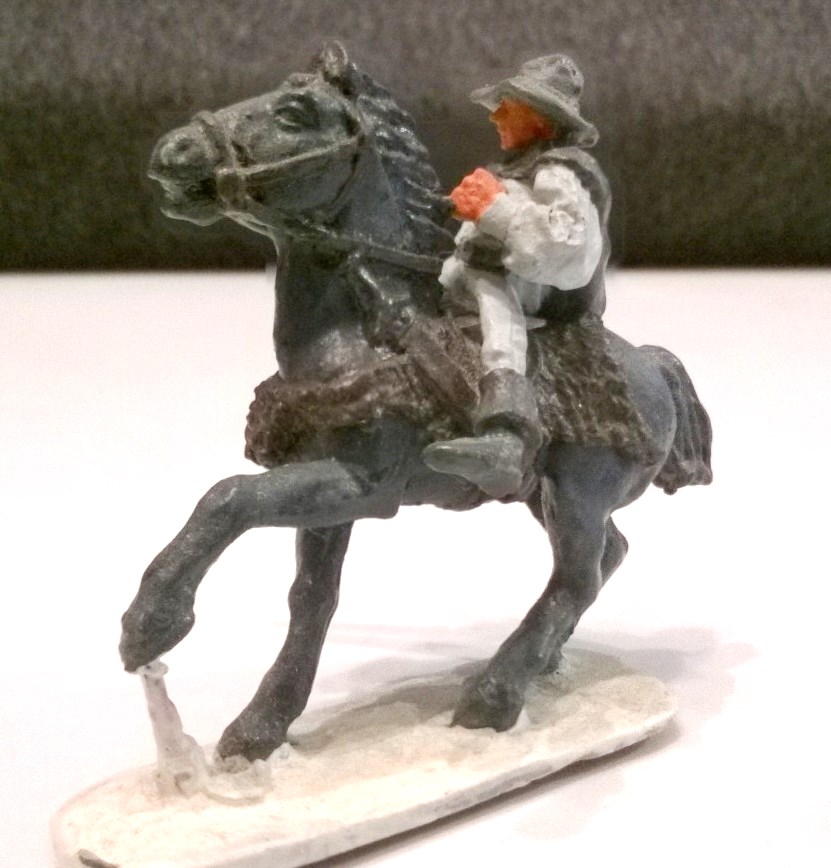 I follow developments in 3-D printing with interest, waiting on the day (should be a simple matter of software and intellectual property) that figurines can be purchased, reposed and equipped to suit, and then printed ready for painting (or hey, as long as I’m dreaming, how about already painted). Then, perhaps, we will see him more tangibly. Until that day, I must direct your attention to the tales, and I think I can say with some confidence that you will find your efforts there rewarded . 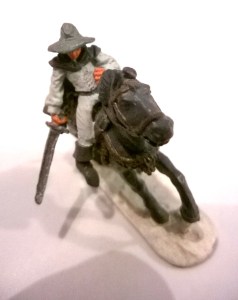 I downloaded a new lens for this attempt, the Nokia Refocus- it specifically says you can get closer to the subject, and refocus after you snap, so I had high hopes. I trust you too will notice the results.

I was able to get MUCH closer without loss of focus. There are still resolution-type issues, but I think those have to do with the light and the quality of the surface. I precariously balanced a flashlight in one hand for some shots. That created splashy pools of light, which on “reflection” I thought were appropriate to the genre.  I used some overhead angles and tried a cloth floor as well as backdrop. I do think the craft of taking the photo has advanced a step here. 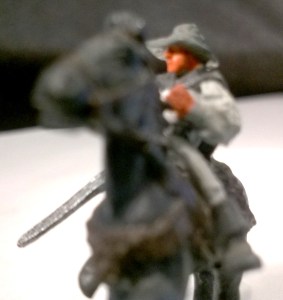 You can even let a shot get fuzzy in places, like this one here; I think it still looks right. And the mounted fig especially is wonderful– elemental and simple but with great action and implied motion. I tackled this figure in the first half of my painting days– with what I learned later on I could have tried some shading on the face, and brought out more detail.

I’m still monkeying around with contrast, brightness and mid-tones  in the Picture Manager utility: the Auto-Fix feature always makes it worse, so a few minutes’ careful clicking up and down on the sliders was worth it. 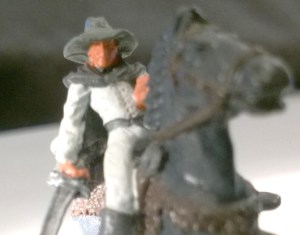 On balance, I feel about this crop of photos the way I do about the story behind them. Perfect, no. And there’s more, much more to learn about this hero. But I think it’s quite good, and getting better all the time. I’ve known Solemn Judgement more than thirty years, and I finally feel I’m starting to understand him.

Your feedback is always welcome. Did I mention this story is on sale now? Get your copy of Strength of Conviction today- find out if Solemn Judgement looks like this in your mind. And be sure to scoop up Part One, Games of Chance free until October 1st!

2 thoughts on “It Figures: Solemn Judgement”