Because in the end, you need to show, not tell 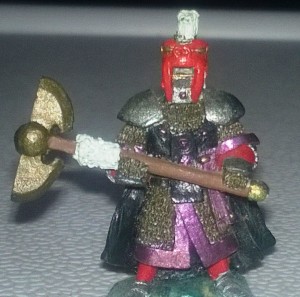 Qerlak Barleybane stands apart as the adventuring hero who retired- or tried to. The rare third son of an Elven noble family, Qerlak stood no chance of inheriting his father’s foef in the Inmark of the Argensian Empire. He is one of five heroes who formed the core of the Tributarians alongside Zoahnstar, Solo, Salling’r and Cheriatte. Returning from the Shimmering Mindsea awash in wealth in the summer of 2001 (The Plane of Dreams), Qerlak got news of a foef on the jungle fringe of the South Mark, and has used his share to purchase it, becoming the new lord of Mon-Crulbagh.

There, he finds life not nearly as settled as it was on his father’s estate, and his disreputable past has given him both friends and habits that come in quite handy (as seen in The Plane of Dreams and soon in the sequel, The Test of Fire).

Qerlak prefers the two-handed ax to a sword, which other knights would see as an eccentricity. He also fights on foot, because he never really learned to ride that well– and this would be a source of immediate disgrace among other nobles (as if his adventuring life were not enough). Qerlak never spent the requisite hours with a lance either, and this would be the final straw if known. But his years of hard adventuring have made him so strong, dextrous and decisive that he can get by in a joust, with an unfamiliar weapon and a horse he doesn’t control with practiced ease.

On foot, bearing his half-plate and enormous ax (both of which are enchanted to be lighter and more puissant than normal) Qerlak is a fighter not to be taken lightly. On top of that Qerlak’s faith in Argens Hopeforger endows him with miraculous powers, especially the ability to Endure under all manner of stress and exertion.

In Qerlak I see the hero who most heartens me. Though among the pre-eminent “front-rankers” of the Tributarians (exceeded for strength and prowess only by Spitz), Qerlak took on none of the airs that would normally form the prerogative of an elven noble son. Several of the villains in The Plane of Dreams are just that, knight-sons who through

precedence or boredom cannot wait for their seat, and have turned to a life of crime.The Argensian Empire suffers from their entitlement and pride. Qerlak, by contrast, accepted his fate and went adventuring as preferable to indolence. And when a fortune fell into his hands, allowing him to purchase first the magnificent half-plate suit of a lord and then a title to go with it, he rolled up his sleeves and went to work on a knight’s foef that could only be described as a “fixer-upper”. 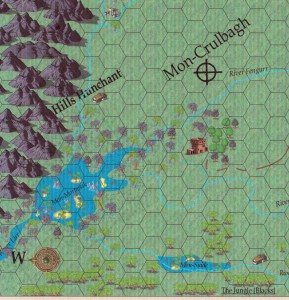 Qerlak thrills to this challenge; nothing dispirits him in either the swampy terrain or the dismal weather. His newly hired castellan Elias Fennet, on Qerlak’s arrival to the foef, sees him address the servants almost as equals and marvels at “a lord without lordly pretence”.

Qerlak’s high spirits, enthusiasm, and his willingness to take risks on himself inspire immediate loyalty in his followers. In a short time, he begins to turn the abandoned foef around, bringing him into conflict with the master of those who control the swamps on his border. Then his former adventuring companions arrive for a visit with some bad news, and it all starts to come together for the young new lord of Mon-Crulbagh…

Much of the enjoyment in Qerlak’s story-line comes from the detail I’ve observed in his character and the intuitive, sympathetic struggle he’s undergoing. A new knight, trying to

do the right thing by his peasants and companions– it makes sense that folks would be loyal to Qerlak, and this trend continues into The Test of Fire.

You can see a map of Qerlak’s rugged, remote foef in the Compendium, as well as a discussion of the heraldry of old and new Mon-Crulbagh, a description of some of the key staff of the manor shortly after his takeover in mid-2001 ADR. There’s even a keep journal, with entries from previous lords alluding to rather strange doings in the murky past.

As before I used my smartphone camera with Nokia Lens, shot under the best light I could muster, on a white tray for contrast. Additional cropping and contrast drawn from MS Picture Manager, which looks to be about my speed. I took many more shots this time,

and eliminated many more as well.

The swamps of the Mon-Morteissk are probably the prime breeding ground of Reptile Men in all the Lands of Hope. Always a significant threat, they’ve practically run rampant in the decade leading up to Qerlak’s arrival. I loved seeing how he gave them their come-uppance, and it served him well in meeting a great new companion as well as helping to solve the mystery of the

Dreamquest. Shooting these dark-skinned uglies gave me some trouble, though– the flash washed them out completely and you don’t see the detail no matter what the setting. But sometimes less is more, as in the deep swamp, late night, unfamiliar sounds, heat and humidity…

As always let me know what I could do to (cheaply) improve these posts. I’m not keeping it short for lack of material. I hope to help spur readers of The Lands of Hope to enjoy the experience, and perhaps help fellow-authors to look elsewhere, or even everywhere for inspiration.