I’m the kind of guy who re-reads the same book- and the longer, the better. Tolkein, maybe six times; even the Silmarillion a couple of times (which really isn’t fair, he didn’t mean for it to get published in that form! But I loved it anyway.). Count of Monte Cristo and Cyrano de Bergerac every three or four years, which at my age… a lot, OK, let’s just drop it. So these tales, many of them stretch back into my childhood. And this time around I’m beginning to realize, in my chronicling, how much they influenced my thinking from as early as I could remember.

I know you’ve seen the movie (one of them, anyway). Have you read Robin Hood? I mean the Pyle version with the fabulous illustrations. I had them read to me by my father around age five, and the illustrations might as well be branded on my forehead. 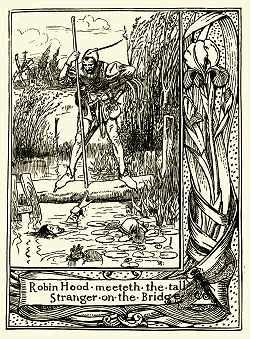 It’s been a revelation to me how much of my own efforts are really aiming to revisit the feelings I got from this version of Robin Hood (and if you’ve seen the movies, believe me, they’re trying to reach this same sentiment). I re-read it this time in the Kindle version.

Since I recall the illustrations anyway, that’s a win-win for me. Think about it- is your experience of heroic fantasy the same as mine?

– Robin almost never kills anyone. One arrogant forester in the beginning (which makes him an outlaw), but he’s defending himself. Then Guy of Gisbourne near the end (who the tales make very clear is a monster). In the Lands of Hope they slay monsters without mercy- but other people are considered off limits until they prove their evil intent. And that reminds me…

– Hardly anyone is that bad, and neither is their punishment. Pyle pulled his punches to make his tales safe for kids. So the worst that happens to the greedy sheriff or bishop? A little well-deserved humiliation, and he loses maybe two-thirds of his purse (one-third to Robin’s band, one third to the poor). Sometimes the bad guys stay for feasting and hunting and end up having a great time. Which leads me to… 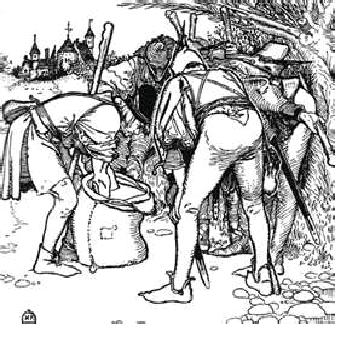 – The outlaws are called the Merry Men for reason. They’re having a blast- time and again, even people who have every reason to be furious can’t help but laugh. Check out the scene with Midge the Miller’s son, see how the four doughtiest warriors in the Midlands are defeated by a man with a sack of flour, and tell me you don’t chuckle. The stories just drip with good will- they tease each other and banter incessantly. Lord, how I love that, all my heroes banter like maniacs. And there’s an obvious contrast between living the high free life of the forest and obeying the laws of corrupt lords and selfish men of the cloth. Friar Tuck is, not to put too fine a point on it, a roaring, belligerent drunkard. But he’s miles closer to a proper priest than the establishment orders. Speaking of which…

– Filed away under “I Don’t Know and I Don’t Want to Know“… there are many instances in Robin Hood where one of them declares another to be a fine fellow, which is great, but then follows up with a kiss. And plenty of embraces, and more than a few declarations of “I love you well” and sometimes tears. I’m thinking “wow, Victorian era book, are you sure?” I can only say that as a child I didn’t pay it the slightest mind. Even now, it’s only a cause for more smiles, in between the adventures. And that brings me to…

– Robin and his crew only get into scrapes because they can’t stand the lack of adventure in the forest. Once the Sheriff stops coming after him, Robin has to go into disguises, sneak back into the city, try the archery tournament with a patch on one eye, etc. for some excitement. That one trait, the desire to seek adventure when wealth and fame are already assured, is at the heart of the lives of the heroes in the Lands of Hope. Now that I see it in Pyle’s book, I’m struck with wonder. How did I not see that before?

So Pyle’s Robin Hood is right at the heart of me, right at the start of me. His tales, and others I could name, continue to inspire my work. {P.S.: One of the best computer games I’ve ever played? Legend of Sherwood– it’s thrilling and hilarious!}

Which books have driven you onward? Do you consciously write in another author’s style, or go for the same kind of characters? Is there a sense of right and wrong you believe someone else got perfectly? What’s there at the heart of you?

8 thoughts on “I Remember Robin (Hood, That is)”