I wanted to limit posting on this topic, partly because I’ve been so unsure, partly because I was always hoping, and partly because I kept expecting the news to be about something other than creating cool fantasy tales. You know, something with put-on-a-tie and make-a-plane-reservation in it, and maybe a lot to do with building a spreadsheet, and then later on getting paid. That kind of work, the kind I’d been doing since the twentieth century before this past February.

Long and short– I became “displaced” as they say, a person on the business-end of “right-sizing” a company. Twenty-two years and change is a good run in this day and age. But as they say sixty is the new forty, so I looked over at my lovely wife and miracle daughter, and just behind them the two mortgages, the broken heating system and all six of our cats, and I thought the same thing Donkey thought at the end of Shrek 2:

Editing and Writing, Those are Jobs

I applied in areas where I thought I could make a contribution. And I found that lots of people need technical writers, but they need them to have remarkably specific experience that I did not have. And yes, consultancies and government agencies and staffing firms and publishing houses all need editors. But they have them, see, and it’s just a guess but I’m getting the impression that once someone gets a gig as an editor, they keep it until they die.

And they don’t die very often.

Looking for work is all electronic these days. The recruiting boards have boatloads of jobs you can’t do waiting for you in the Inbox practically every day. Applications take a few minutes, and if they have an assessment test, maybe another half hour twice a month. I was in a severance period, a great blessing, and I wanted to use the extra time profitably, at least to stave off boredom and the sense that I wasn’t getting anywhere. So I wrote a novel this past spring, and kept on narrating audio-books for marvelous colleagues like Gilbert M. Stack and M.R. Mathias.

I never thought of it as a job. It was too much fun. 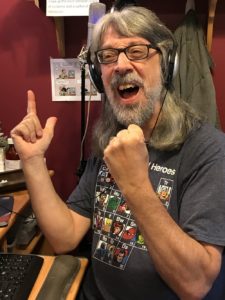 began to unravel that little knot in my head– the one that keeps me stupid– by asking “do I have the right to be happy in my work?”

I honestly can only think of one job that I was aware of being unhappy doing, and that was working for my Dad. Long story but every other job I’ve ever done seemed just fine to me. I liked the people, I liked the challenge, and I certainly loved getting paid.

But Narrating Was REALLY Fun

And It Was Starting to Make Money

So I kept looking for “real” work and I set myself the goal of winning an “upfront” narrating gig.

Audio-books Get Made on One of Two Business Models

{Yes there are others these days, but don’t interrupt:}

Royalty Share- the author hires you and pays you nothing. You finish the work and he still pays you nothing. The A-book goes out and starts to sell and THEN a) the distributor takes a cut, and b) you and the author split the rest. (This is sometimes referred to as passive income.)

Per-Finished-Hour (PFH)- the author hires you and pays you nothing. You finish the work and THEN he pays you based on an hourly rate for the length of the finished product. The A-book goes out and starts to sell and THEN a) the distributor takes a cut, and b) the author gets the rest. (You’ve already been paid, calm down.)

Bills to Pay- Cats and Mortgages

For a narrator, royalty share is nice because you just go on with your life and the money shows up like a bonus. I’m getting what I’d call “cat food money” from the titles I’ve narrated now. And with a half-dozen indoor cats who love people and food, maybe in that order maybe not, the amount represented by “cat food money” is not insignificant.

But you can’t budget against major expenses that way. You don’t know what to expect.

Now to get PFH on a steady basis, if I could achieve such high demand from up-front-paying authors that I virtually had my calendar blocked out full-time… THAT could pay the mortgage. One of them, anyway. I’ve kicked back and done all the math.

Record-Retain Rate ~90%– that’s my estimate of how much out of each hour of recording time survives into the final product. It’s a pretty good rate- I throw out a few bad takes in each chapter, couple stumbles with accompanying curse words, or I have to go back and punch in a paragraph because somebody flushed the toilet and that comes over PERFECTLY of course (epic fantasy books almost never describe the hero in a garderobe, unfortunately. I did once!).

Record-Production Ratio ~3:1– i.e. it takes me around 3 hours of cutting, trimming, noise reduction and locating/implementing sound effects to “finish” each hour of good recording.

Bottom line, I could probably produce about 15 hours of finished audio, maybe a full-length fantasy novel, each week if I did it full time (recording each day for 2 hours and editing for around 6 more).

I would be able to pay the mortgage. Probably both of them.

And I’d be IN HEAVEN. Are you kidding me, narrating A-books for a living?

But there’s no point hoping about it unless I at least get started.

Which brings me to my announcement.

Around the end of November I was invited by Findaway Voices to participate in a competitive audition for an A-book; there were five of us altogether. I sent in my sample, five minutes of reading from a portion of the book. I’ve auditioned two or three dozen times for A-books over on Audible, without success so far. 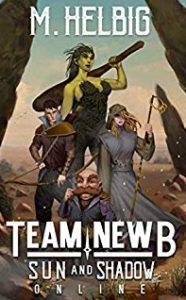 This time, I got great news. I am preparing now to start narrating Team Newb by M. Helbig. It’s a marvelous tale in the LitRPG vein, that whole playing-a-cool-game-WHOOPS-now-I’m-IN-the-game thing. It’s got humor and obviously that game-feel, and terrific rankings. It’s an official contract, it’s PFH and it’s signed. The book should be done in late January and appearing at retailers shortly after that.

I’ll post more about the book itself later over on the Media of Mien, but for now I just wanted to reflect on a sign of hope, coming to me at this time of year and after such a long time of trying and searching. I am deeply grateful, and need I add STOKED.

I still don’t know if I can grow this into any part of a living. But I have the chance to prove myself now, to a new audience for an author who never heard of me before he heard my voice. And did I mention one of the best parts? The sub-title of the book contains the two magic words any narrator hungers to hear:

So if anyone needs me during the day I’ll be at my desk as usual, looking for a job and sometimes with the headphones on. But early mornings I’ll be in the studio, recording a Fantasy RPG epic and loving every minute of it.

The blessings of the season to all who read this. May your work bring you happiness, even as it quickly feeds the cats and slowly retires the mortgage.

10 thoughts on “Getting Work- and Other Forms of Happiness”