I might set a record for confusing new readers before they even finish the title. If you just came in, I’m blogging about works of heroic fantasy everyone would recognize, but few of us may have read. So you might wish to return to Part One before continuing, where I used the work of the Baroness d’Orczy to explore the theme of the secret identity. And I promised there, that this theme would cover two great works of heroic derring-do, fairly close in time but far apart in geography (though both are set in the Alleged-Real World). So, who ranks alongside The Scarlet Pimpernel as one of the earliest heroes with a secret identity? Of course, it’s the main character of that incredibly famous tale… The Curse of Capistrano!!

Subtitle: The Mark of Zorro

Indeed, one of the all-time bad title choices in history, I’d say. Johnston McCulley published this immortal yarn under a name that makes me think of swallows pooping on your car, back in 1919 as a serial in five installments of the pulp magazine All-Story Weekly. I’ve been keeping an eye on the way the written works wend into other forms, and this is one of the great good luck stories for any aspiring author to remember. Who knows what would have become of this little tale with that title and publisher: but the great movie stars Fairbanks and Pickford saw it and decided it would make a great debut movie for their new studio. The rest is certainly history- a big hit for United Artists (!), causing McCulley to re-issue the tale as a novel, and the title we’ve all known has stuck ever since. Whew.

In the Solar System of Fantasy, Zorro clearly ranks as Cinematic Heroic for its rollicking style and humorous escapades. I smiled practically the whole time reading, much as I did during The Princess Bride. Where Percy plans, Don Diego seems only to act- he barges into a room, then conducts a duel, hurls an insult, whistles up his horse, rides like the wind. Both men, in their mild-mannered alter egos, refuse to duel a hothead in a way that makes them seem ridiculous. But The Pimpernel never once draws his weapon or throws a punch, whereas Zorro cannot seem to keep his sword in its scabbard.

This brings me to one main point- Zorro is REAL. I mean, he’s got a mask, he rides a horse- he’s actually THERE in the scenes, taunting his foes and daring to speak words of love to the gorgeous Senorita Lolita. People see him, take a shot at his back, duck his blade- the Pimpernel is a name, but there is no “him” there, just his many disguises. The contrast between Zorro and Don Diego Vega is shown to the reader, often within the breadth of a single fast-paced page. Time and again, the poetic, disinterested, weak Don Diego begs the need to retire and rest, trudging from the room- and mere seconds later, the dashing masked outlaw has arrived through a window, to announce another breathtakingly bold and honorable intention. The hero pledges his love, or promises revenge, laughs, leaps, disappears- and here just a moment later the tired caballero Don Diego returns, complaining of the noise and horrified to hear that Zorro just left.

So we come to another big point- our hero not only has a secret identity, he uses it to stay close to the action as well as far from suspicion. Don Diego complains of any exertion, even the need to woo Lolita, but most of all he bemoans how this masked menace ruins any chance for quiet contemplation. Seldom has an alter-ego been so openly disdainful of his heroic side. If this was a stage-play, you’d need your costumes fitted with velcro seams to get on and off in time. Though the action of the tale is fast-paced and seems random, we find by the end that Don Diego, like Sir Percy, has been planning this meticulously. Everyone believes he cannot be Zorro because he’s been acting this way since he was fifteen. 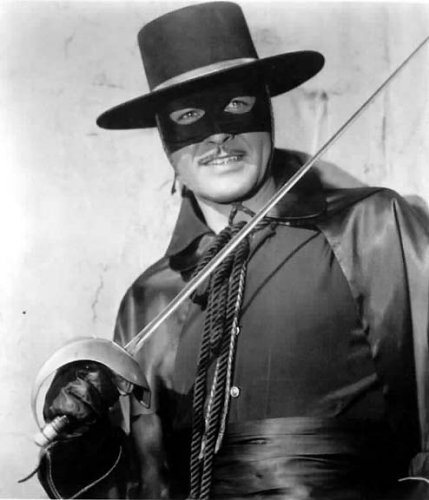 The differences between Zorro and the Scarlet Pimpernel are legion. Blakeney has a cadre of followers from the start, and acts to save them. Zorro only recruits the other young caballeros very near the end, and they play a key role in rescuing him. British and Spanish honor aim at somewhat different targets but both men pursue them with vigor. Taking a lady’s arm is about as far as they go in Britain, but the Spanish dare to hope that they may kiss her hand. Yeah, me either. I was surprised to note how many times Zorro wielded a pistol; the writer made it clear each time that he was only balancing the odds before forcing a man to duel him unaided (at which point the pistol in his other hand becomes a liability for Zorro). The Pimpernel leaves his mark in red, but only on paper, and he uses a pen: Zorro, of course chooses a somewhat more dramatic medium and settles for a single letter.

But the biggest difference, to my mind, is in the writing. Ms. D’Orczy really reaches some literary heights with her comparisons and descriptions, whereas Mr. McCulley aims only for a riotous romp filled with action but very little scene-setting and almost no reflection. Zorro would be sword and sorcery except the entire country is imperiled by the corrupt government and cruel soldiers who run it as the story opens. He is Robin Hood without the bow, breaking the law to serve justice. Blakeney risks his life as the Pimpernel but has an entire nation to run to for safety. Zorro has only his mask and wits to hide from his enemies.

I procured a digital copy of the original book from Amazon on my laptop Kindle; the full title is Zorro: the Curse of Capistrano and Six Stories, all by Johnston McCulley. The usual missed words here and there, a couple of repeated phrases- it happens with these quick transcriptions, but I’m happier with that when it’s free than this time when I paid $2.99. . I was interested in the other tales, but oddly, while the plots were interesting the level of the writing came nowhere near that of Zorro. The tone of McCulley’s other stories runs closer to Robert E. Howard and other pulp

writers of the day- darker, less fun, and I’m sorry to say less inspired. Again, good plots and some nice touches but overall stick with Zorro.

I was just too young to enjoy the Disney TV serial version: I can only picture Guy Williams wearing a spacesuit. I grew up expecting to see The Fox with the  bullwhip, not a pistol, alongside the rapier, and the movie-versions I’ve seen did not disappoint. Using Antonio Banderas in the most recent movies (as a “Zorro 2”) was as natural a choice as taking Michael Jordan for pick-up basketball: and as for Catherine Zeta-Jones… my Lord, what words could suffice? I really enjoyed those movies and think they truly carried the spirit of the book (in a somewhat different- certainly more explosive- setting). It’s hard to name a character from a century ago who has seen more rebirths on film, TV, comics and elsewhere.

Sure, But Can It Work In Your Tale?

In “straight” heroic and epic fantasy, the characters seldom resort to disguise or secret identity. Frodo and Sam try to sneak into Mordor wearing orc armor, and sometimes one of Arthur’s knights or Robin Hood would don a disguise for adventure. But to create another character or persona is rare- as a fantasy author, you have enough to do introducing a new person (and his or her world) to your readers, without layering on more! This is one reason Feldspar in Fencing Reputation can get away with his many guises- no one around him in the city of Cryssigens would consider hiding their “real” selves, they spend all their time and money advertizing exactly who they are for fame and influence. So the infamous stealthic can adopt not just one, but a dozen guises and no one is the wiser- including Feldspar, who comes to have a bit of an identity crisis in the tale when he decides to “just be himself”.

Secret identity as usually seen in the comics provides the hero with a safety-valve, a way to interact with people without endangering their lives, and sometimes a chance to collect information which they then use in hero-guise. Also, wearing spandex all day can raise issues in the mall bathroom. Finally, we’ve seen themes in the comics lately to indicate that if heroes “came out” on a more full-time basis, the world itself would react and change: becoming more of a straight fantasy or sci-fi setting. Keeping a hero under wraps and letting a regular guy do the work allows the author to stay grounded in a “default real world” background, and limits dreaded world-building to a minimum (things like hiding the lair, managing the costume change).  There could easily be fantasy stories where evil has run so far amok that a secret identity would be useful to the hero.

I’d be interested to hear your recollections of such instances in “pure” fantasy.