I’ll post and update this sheet periodically so folks can hit the link and find me outside the cozy confines of my house, doing some kind of writerly-business.

Had a terrific time at the Bear Library Author Day (April 9th) where I premiered my thoughts on Writer’s Block. I may redo that one later in the year, but for now here’s the evolving schedule

Never Mind Your Voice…Find THEIRS! 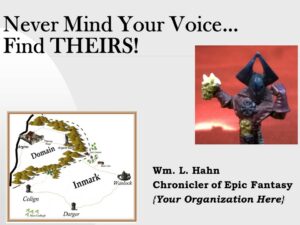 Most authors have an instinctive understanding of “where they are” in the story. It’s deeply felt, they can see the movie already in their mind. Great! But does the reader see what you’re pointing to? The various choices of character Point of View (3rd, 2nd and 1st person) are crucial to the impact your story will have. Does it vary by genre? By gender? How can we analyze which voice-choice is best for our tale? Using examples from his own work, discussion, and free-write time, Will helps you to see the power of choosing the right voice. Which decisions have you already made?

They’re getting new digs in Middletown and it includes a recording studio! How fabulous is that, I can’t wait to check out the facility and then map alterations to my preso.

Even the bravest writer tends to shrink from the challenge of making an audiobook, but it 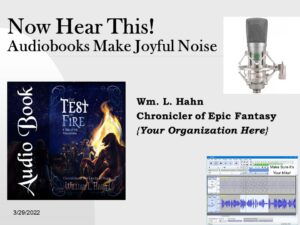 would be a mistake to ignore this fast-growing niche of NEW customers. Will covers the options from hiring a narrator to DIY, and walks you through how to record your own voice (yes, YOURS!) to edit and produce audio files. Will has narrated dozens of his own works as well as those of other authors. You have choices, exercise them!

Hook ‘Em from the Start

The Many Uses of Your Tale’s First Line 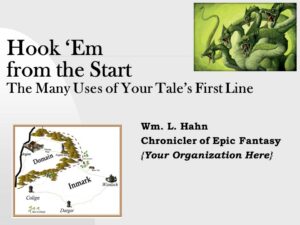 We’ve all got a great story to tell. But it’s hard to realize that readers won’t wait forever for it to start! In this writer talk, Will reveals the many objectives that can be accomplished in the very first words of a story. Examine and discuss what some of the great fiction authors of all time have done in Sentence One. List the kinds of impact you can have; give yourself credit for the powerful ways you can set the stage. This talk is great for authors who have finished a draft or are close to it, as they consider which edits and polishing their tale still requires. Laugh and gasp at the efforts of other authors–including Will himself– and start to put those lessons to work immediately.

That OTHER Thing You Can Do with a Book

Sounds absurd on its surface, doesn’t it? Your own writing beckons, who has TIME to read 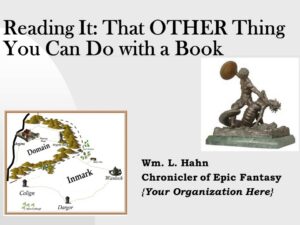 anything else! But your love of reading–those tales you’ve been eating up since your childhood–that’s what drew you to the writing desk now. Trying to JUST write your book is like driving a car on fumes. Will looks at famous tales from yesteryear, found in his blog series Classics You’ve Never Read, to reveal the remarkable features and tactics that past masters devised (and you can carry on). The many benefits of reading for a writer will stand out, and you’ll carry away freedom from the guilt of continuing to read.

The Smyrna Opera House Fair in March was a very good time: sales were quiet, but great to see people again and some exceptionally good networking. I’m determined to get back out there this year.
All venues are tentative at this point, my schedule is too uncertain. It’s my employment situation; library gigs pay, but these fairs are a cost. But I hope to be at the following (websites included).

June 18th
I’m probably 50-50 at best to attend the premiere event I’ve ever known. The family might be traveling that weekend, so I can’t say. But it IS good to know that this year, the hottest day of summer will suddenly shift back to June from August or July. These folks could have the fair at Michaelmas if they wanted to accelerate global warming…
UPDATE: This won’t happen in 2022, to my great regret. The people at DCC are fabulous, even offered to talk about a panel which would have been a dream. But the family travel plans would make it too near a thing. But you should still go!

December 10th
I’ve never been able to attend but I hear terrific things about this one. They’ll post information close to the date, but it’s always been in December. And Genna usually has a concert or rehearsal… this year, we’ll see!
UPDATE: So this year, we saw. Ocean City kindly informs that they are booked two years in advance. Wow! Maybe I should shift my sights to just trying to attend this year, and then in 2023 when Genna’s at her Doctoral program, the chance will emerge at last. 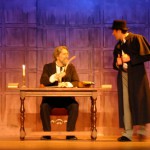