Here’s an audiobook giveaway for all fans of listening and word-play.

I’m thrilled to kick off the school year with a new author and an absolutely unique sub-genre for my narration projects. My good friend and very talented artist Chris Adams asked me to narrate his tale of adventure and romance, The Hunter and the Sorcerer. It’s now out on Audible and I hope he sees every success from his work. Because then I will too! But also him… 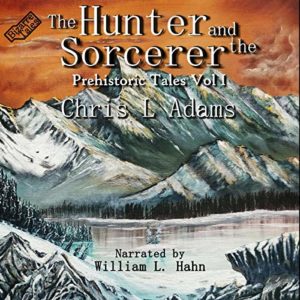 But How to Describe It!

As I mentioned, this is an unusual genre. I’ve hammered away at a great alliteration for it but can’t seem to break through. Here’s the set-up:

A prehistoric tale of the Pleistocene…the adventures of Bru, a Hunter of the Seven Rivers Tribe, as he goes up against saber-tooth tigers, cave bears and an alien race intent on clobbering his world….

Simple, right? A stone-age hunter kidnapped by an alien scientist and rocketed away to another galaxy. If you can’t decide whether you like spears or ray-guns better, this is the story for you. No need to pick!

However, what’s the catchy phrase for that unique brand of plot? I want something alliterative, a pair of words that nails it and helps me push the plot to the world. So I’m appealing for help. 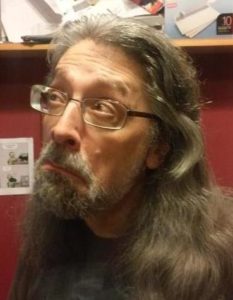 Here are some ideas I’ve tried and discarded, just to give you the idea:

Leather and Lasers- sounds too much like alien erotica (yes, there are plenty of those)

Stones and Stun-Guns- the alliteration is right, but neither one quite fits the plot here

War-club versus Warp Speed- too long, and no clubs used

You get the picture? I have found this remarkably hard to come up with.

So I’m asking for your help with this audiobook giveaway!

Leave a comment below or on the FB post with your suggestions, and I will reward the top three entries with a free code for listening to the audiobook! If you haven’t tried an audiobook yet, this is an easy way to get started for nothing, in exchange for a burst of genius from your mother wit. If you’re a regular listener you know the drill. This tale might be ripping fun for you, a break from those cozy mysteries or paranormal alternate-universe cooking thrillers you’ve been with. Wait, are there any of those latter books left?

Just comment below or on Facebook (or send me a private message if you have copyright concerns). Create the perfect “Blank and Blank” combo to describe this great tale. You could be a winner.

Check out The Hunter and the Sorcerer on Audible. 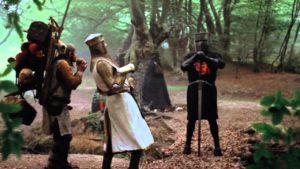 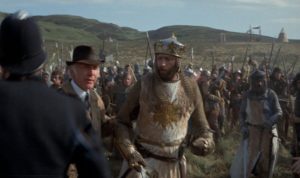 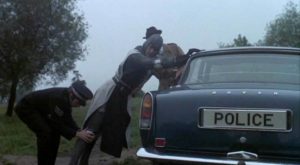