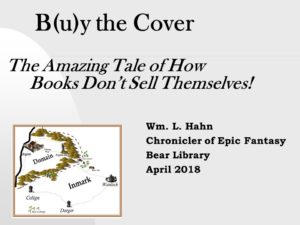 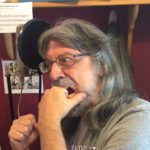 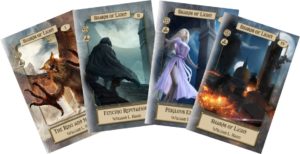 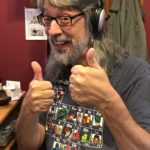 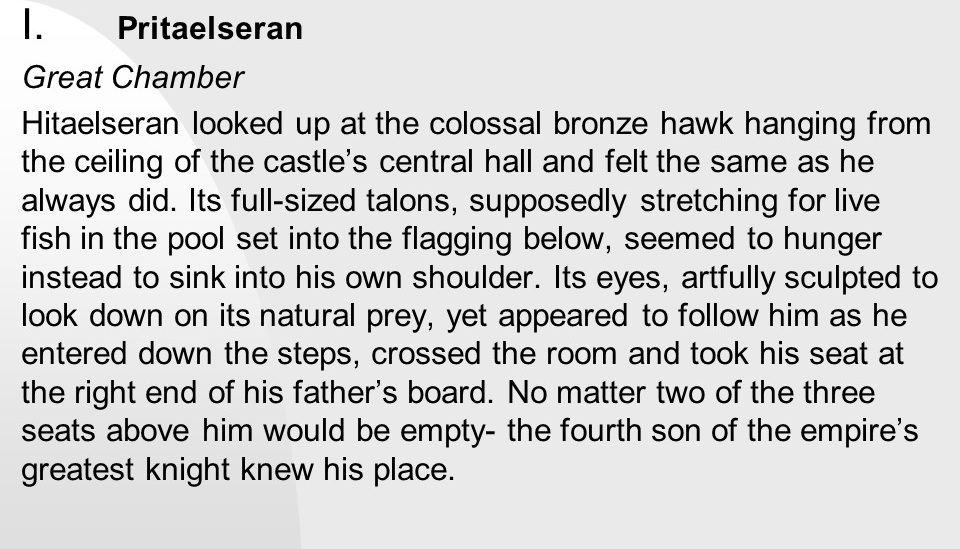 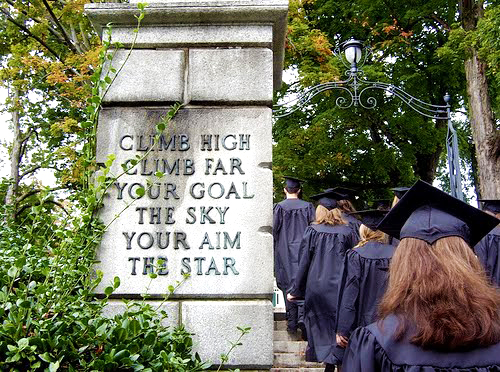 I thought I should give a brief round-up of the times I got up from my desk, left my house and met someone in the context of my writing. And I start out with one item already on the to-do list for next year: don’t finish your activities before the calendar ends! I do have some rather serious distractions and am still seeking a better routine with more events on it for the future. Here’s how I did this year.

How Far: like, thirty yards.     How Often: many times before

One or two books. This was a panel for aspiring authors, where the ultra-prolific Liz Dejesus and the uber-poetic Shannon Connor Winward presented alongside myself for several hours. 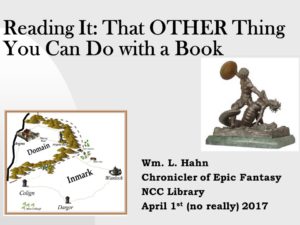 I can’t lie, these panels are terrific fun because you get exposure to colleagues and how differently they feel as well as to aspiring writers from all angles. I could tell people walked out more energized from being around that atmosphere, and the staff at Bear Library really understand how to support the writing community.

This is the haymaker of live events for selling. Nothing an indie author needs that a 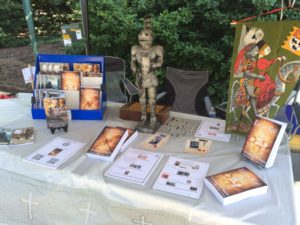 raucous, well-organized convention of several thousand happy people can’t help fix. Perfect mix of cosplay, interest in heroism, lots of other items for sale, food, the whole nine yards. It’s by far the biggest load-out, complete with tent, three chairs and oh yeah- a family! But all worth it, sweltering heat or no. I had even better sales than the year before (which was also a record setter for that year). No question, the ComicCon is irreplaceable.

Probably the number one memory of the year was the several customers who marched up and said “where are the sequels”. Repeat sales in person, yeah that will boost the old self-esteem you betcha’. I helped run a panel with the indomitable L.S. King for over a dozen participants, and they kept us after with all kinds of questions, clearly very energized by what we said. My daughter Genna made a great impression with her Kermit outfit, while I eased off the full-wool Solemn Judgement look and just went a tad Renaissance for the day.

No way I would miss ComicCon.

How Far: like, thirty yards.     How Often: many times before 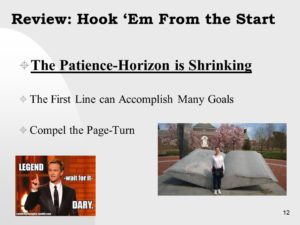 A very cool day. I teamed once again with Liz Dejesus on a panel to a smaller group of very energized and interesting aspiring authors. I put up my bit on creating a killer first-line of a novel and I could see they enjoyed it a lot. This was one of those times I felt like we did some real good out there, and I wouldn’t be surprised if you saw a book or two come out in the next year or so from folks who attended (though we weren’t the only inspiration they had of course!)

How Far: less than half an hour away.     How Often: my third fair 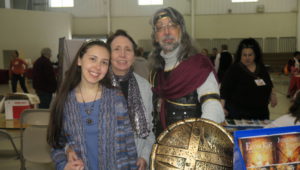 I moved several titles to new folks this year, but overall I had the impression that the Art vendors did better than the book folks. But I knew my fortunes were assured because my good friend Bernie Schmidt came up all the way from Virginia, AGAIN (he did it in 2015) to patronize the Tales of Hope, hauling away so many copies for himself and his family, I probably should have given him one of my bins. Seems unfair to count them as sales, when the motivation was so obviously friendship. But there’s no reason friends can’t be Children of Hope, and Bernie certainly has that down.

Chatting with my table-mate LS King came easily: once she had coffee I could hardly get a 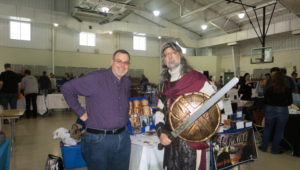 word in edgewise. Fellow epic author Dan Ford was at the booth right next door and I got to chat him up about several networking-type topics. This was the first year they had reading stages, for us to give a little excerpt of our work to folks at the food vendor-end of the room. The acoustics of all gyms are exactly the same, but it wasn’t terrible- those who wanted to hear us could. I have a video of my reading from Bernie, the start of “The Eye of Kog”, and I heard Dan and several others read their bits as well. I hope they continue that idea next year, maybe with a nice stand for the mike so we can turn pages without cursing.

How Far: one hour’s drive.     How Often: first time event 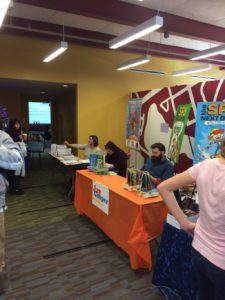 I’m not gonna’ lie. Had some nice folks say hi, but that was about it.

Great chatting with the other authors, Liz and LS and several I had not met before from various walks of the writing universe. The library’s a good space with potential, but the traffic was all for the medical insurance sign-up they had going on at the same time, and people trying to get their kids on Obamacare weren’t terribly interested in laying down the green for an escape reading adventure. We did a panel that afternoon with about a half-dozen folks, mainly young people, and the questions were quite good.

Next Year, Gotta’ Do More

I’m targeting ComicCon, at least one round at the Bear Library, and I want to add First State ComicCon, CecilCon and Ocean City to the rounds if I can. That would be about as much as 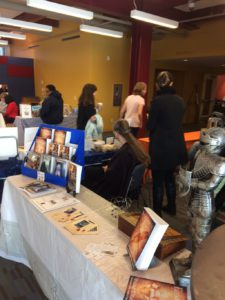 I think I could possibly take on as long as Genna’s in school and we have just the one car. I really love getting out to meet and chat with fellow authors and readers. Now if I could just score a radio appearance somehow…