Will you look at all the dust in this dungeon! How long has it been since the last vict- er, guest author was here? Let me just clear out the worst of it over in this corner, by the sharp things. Gad, if she’s allergic to mites it will be enough just to bring her in here. And by the way, bring her in here.

We are delighted to welcome– yes, that chain around the ankles, fool, have you forgotten your job– Ms. Jamie Marchant, who fell into our clutches during her blog tour for The Soul Stone. I don’t believe we’ve had the pleasure previously, but we’ll soon get everything we need from her. Just let me find my favorite bullwhip- ah there, covered in grime. Let us begin.

Q: So where do you come from, author-person? Your location in the Alleged Real World is of no consequence here; we want to know your roots as an author. When you were young and still contemplating your life of crime, whose temptations swayed you the most in reading? Was it always fantasy for you, or did you come to the genre late in life?

Jamie: As is often the case, my family first led me astray, especially my older sister who told me fairy tales and encouraged me to write ones of my own. In my teen years, I fell under the influence of Piers Anthony and Stephen R. Donaldson. As an adult, Mercedes Lackey and Jim Butcher completed my corruption until I was irredeemably a fantasy fan, but as you see, the seeds of fantasy were planted in me before I was old enough to read for myself. I really didn’t have a chance.

Q: I completely understand, blaming others is typical in these cases. Bailiff, fetch us this sister and we shall have a talk next. Tell us a bit about Korthlundia where your tales are set. Your main characters seem neck-deep in royal intrigues, on their guard every minute. Is the world also at war all the time? Do regular folks suffer from whomever it is opposing the goddess who has picked your heroes to help? I mean, what kind of a world are we dealing with here? 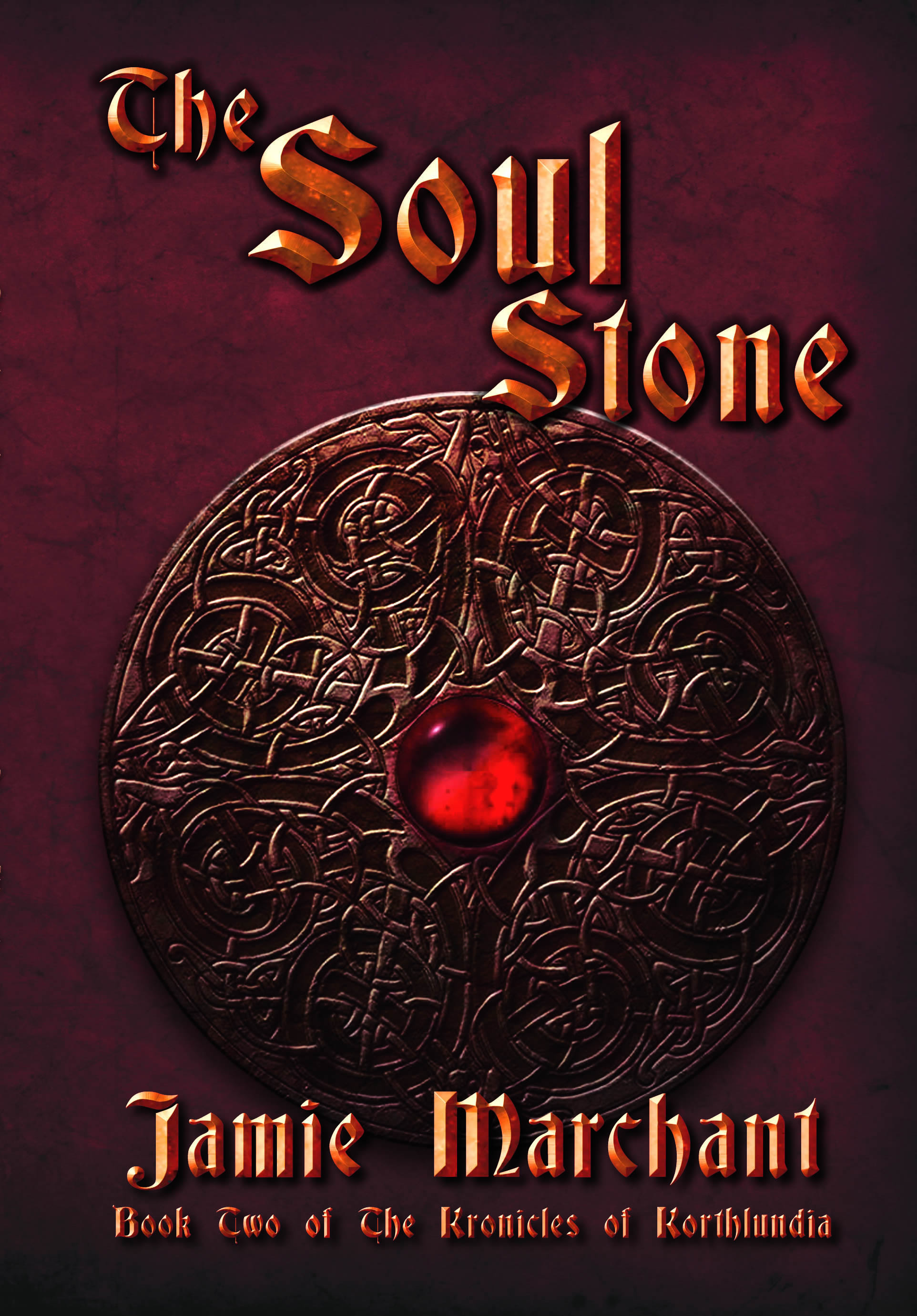 Jamie: Korthlundia had enjoyed over fifty years of unbroken peace because of its geographical isolation and the wise rule of Samantha’s father, King Solar. Both the nobles and common people prospered. The troubles in Korthlundia began when Duke Argblutal murdered the king and attempted to usurp the throne. Samantha was only nineteen years old, but she and Robrek put him in his place, six feet under, at the end of my first book, The Goddess’s Choice. However, the nobles aren’t too keen about a young woman and a common young man taking the throne, and the unrest is starting to affect regular folk as well. This is especially true when, in my second book, the Soul Stone breaks loose from its ancient bonds and begins to kill indiscriminately.

Q: Excellent! Always good to hear that a villain with an unpronounceable name is dead. Removes so much worry. Coming back to your heroes, you make it clear that Crown Princess Samantha and Robrek, the common-class sorceror, are from very different walks of life. They have very separate talents too. And busy! Saving the world makes for a crowded calendar, I suppose, but if these two are destined to marry, do they happen to see anything in each other along the way? Or is this going to be a marriage of fate and not the heart? (That is, assuming they make it long enough!)

Jamie: As the crown princess, Samantha had always believed that she couldn’t marry for love. This becomes especially difficult for her when she meets and falls for a common peasant boy at a horse fair. Although she comes to learn that Robrek is a powerful sorcerer and nowhere near as common as she first believed, she thinks an unbridgeable gap divides them. Only in bard’s tales do peasants marry princesses. At the end of The Goddess’s Choice, she is overjoyed when the Goddess reveals Robrek to be her choice for her consort. Theirs is very much an affair of the heart as well as of fate. However, in The Soul Stone, it appears that Robrek won’t live long enough for them to enjoy their love.

Q: You mention getting all geared up on literature in school, but then putting the writing itself on hold for a long time before taking up the pen to write about places like Korthlundia. I accuse the Alleged Real World of criminal trespass into your free time! Bailiff, take the ARW into custody, we’ll deal with it later. But what does the victim have to say? Did you not know this was what you wanted, or were you always thinking about it.

Jamie: I knew since I was a young child that I wanted to be a writer, but this ARW you speak of seduced me with the idea of making money. It took a few years for me to realize I was the victim of a con. Yes, one has to eat, but professional success can’t compensate for the absence of the creative muse.

Q: How would you describe your success so far, and what have been the keys to further exposure in your opinion? Are you happy with sales, with new outlets, and professional connections you’ve made? Are you mainly a paper book author, or did you lean on e-book sales early on?

Jamie: I’m not sure that any author, especially one published by a small press, is ever happy with sales. Getting sufficient exposure for my work is difficult, but I’ve been making progress with connecting with other authors and bloggers via the internet. While my books are all available in paperback, it is the e-book sales that make up the greatest portion of my books sales, which seems to be typical.

Enough, we are satisfied for now and hereby order your release. You may keep the manacle as a souvenir. Just leave us your information, where we can find your confessions (I mean, writing) and the proper links to seek you out for further punishment in the future.

From early childhood, Jamie has been immersed in books. Her mother, an avid reader, read to her, and her

older sister filled her head with fairy tales. Taking into consideration her love for literature and the challenges of supporting herself as a writer, she pursued a Ph.D. in American literature, which she received in 1998. She started teaching writing and literature at Auburn University. But in doing so, she put her true passion on the backburner and neglected her muse. Then one day, in the midst of writing a piece of literary criticism, she realized that what she wanted to be doing was writing fantasy novels. Her muse thus revived, she began the book that was to become The Goddess’s Choice, which was published in April 2012. The second volume in the series, The Soul Stone, was released this June.

She lives in Auburn, Alabama, with her husband, son, and four cats, which (or so she’s been told) officially makes her a cat lady. She still teaches writing and literature at Auburn University. Her short fiction has been published on Short-Story.Me, and my story was chosen for inclusion in their annual anthology. It has also appeared in the anthologies—Urban Fantasy (KY Story, 2013) and Of Dragon and Magic: Tales of the Lost Worlds (Witty Bard Publishing, 2014)—The World of Myth, A Writer’s Haven, and Bards & Sages.