Since my last post in April, I have become increasingly absorbed by the effort to convert my tales to a-book format and I thought I’d report on that for anyone considering the same. This and following blog posts will be my answer to What I Did Last Summer, when fall 2018 arrives.

What in the Lands Am I Doing?

If you’re not interested in the first bullet, these posts are probably not for you. If you don’t feel you can handle the second, then this is not your work, but I still feel you should consider this outlet for your tales; there are of course many ways to get a narrator on your own and oversee their rendering. If folks want I could bring in some fellow indies to comment, and I did have the pleasure of interviewing Ms. Karin Gastreich once upon a time who had a terrific experience of doing just that. Perhaps in a later post we can check in with her again and see how it’s going.

But for the most part what I’ll be commenting on here relates to the points above:

My first announcement turns out to have been a bit premature. The files I submitted, from my a-book version of The Ring and the Flag, were based on a recording I had done years ago and which, as I discovered, were not adequate to Findaway’s technical guidelines. The microphone I used to record the tale at that time was one of those omni-directional sticks that came for free with some computer game I bought back before Pentium was a thing. I swear to you, it said “Made in the Philippines” on one side, and on the other in very tiny letters “Viva Marcos”. So, yeah, poor quality.

This was an epic struggle all by itself: I searched my entire house for the best room to read

in, made multiple tracks of each paragraph, and slaved away on my editing software (Audacity, by the way, fabulous program, high marks) to get the whine, the hiss-noise, the white fuzz out of the background. No soap, I sounded like Demosthenes trying to speak over the roar of the sea. Honestly, it could not have been less than a hundred hours that I spent altogether, for six chapters of around a half-hour each, to get one decent take of each section where my voice was louder than the whine the mike produced, from nothing, just from being that ridiculously cheap.

This was the product that Findaways rejected, probably for purely technical reasons like the kbps of the output. But I can admit now, it truly sucked. I cannot bear to listen to that version anymore.

Fortunately, I now have a dazzling-great Pronomic microphone sent to me by the incredible omnivorous publisher Katharina Gerlach at the Independent Bookworm, and I cannot begin to describe how much easier this job is now. I plug it in, open Audacity, and hit record. Then I start to read the tale And. That. Is. All. Background fuzz, white noise all gone: I used to have to keep my mouth in a range from the mike of about the width of a quarter, or I’d over-amp and under-amp. Now I can gesture, rock back, turn my head as I speak; and the mike picks it up, don’t get me wrong, but it sounds on the track just as if I had gestured, rocked back, turned my head. Background is clear and clean.

I’ve raved about it on my Facebook page, and at least two people have asked me where they can get one. Unfortunately, this brand (Pronomic) doesn’t seem to be available in the US, and I’m no expert but I’m sure products of similar quality are available. I can only recommend that you ask around to someone who knows recording equipment; the investment is absolutely crucial, but it’s a once-and-done and a pearl beyond price if you are thinking about doing this.

Does the Job TOO Well?

Some of my frustration (hardly worth mentioning compared to the old days) came with the mike picking up too well. I record with headsets on and they are noise-cancelling. So if one of the cats saunters into the room for a post-breakfast snack, I don’t hear it. But on the replay I laugh out loud; every dish-clink, each lip-smack is clearly there. I recorded the last scene of The Ring and the Flag, where Justin reaches the end of his mission, on a quiet Saturday afternoon with my ladies out of the house. On the opposite end of the ground floor here, thirty feet away, I had left the back porch door open a foot to let in the air. Across the back yard, maybe another thirty YARDS away, a single songbird was chirping how happy she was to have young ones in the nest or something. I heard nothing until the replay of course. Here I am, laying down the track of a marvelous city parade to the arena :: cheep! ::, with guards and litters and cymbals clashing :: chirp-eep! :: and Justin racing against time to reach the conference before the :: cheepy-cheep :: voting… OK, Take 2.

But all this moaning to make a point. It’s easy to do again. And I’ll talk about that next time. 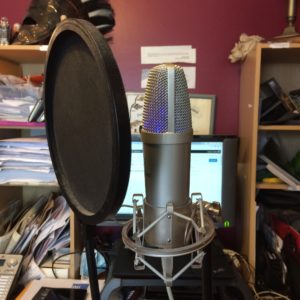 How Long Will it Take?

I haven’t made precise measurements of the pace, but based on recording sessions I’ve done on this go-around, I would say you are going to be recording for roughly an hour per five thousand words of text. Your technique will probably vary and I’ll have more to say about the way I do it next time. That is what you’ll need to get a usable version of each sentence/paragraph. Editing that 5k section should take another hour, maybe two, and then if you wish to add F/X like music, echoes, etc. that’s rather open-ended. Personally, I love that stuff and can’t say enough about the resources of a site like Freesound. But you may want a purer track, fewer distractions, or maybe you haven’t really thought about your options there. I would liken the use of sounds in an a-book to that of word-art in an e-book. My tales on paper have ink-splotches, larger font when heroes are speaking, bloody marks on letters, and more. Something to consider.

Read the Tale Aloud– Not Selling Yourself Short

I have long been an advocate of authors reading their drafts aloud as a means to improving the work. Yes, I’m a ham actor, it’s true, and a Game Master of long standing and while we’re at it, probably the most ridiculously extroverted non-celebrity you’ll ever meet. So sue me. But when you read aloud, you catch repeat words, bad construction, breaks in the flow, and things that just don’t make sense. Habits you’ve become blind to in your enthusiasm, or fatigue: mistakes you are either leaving to a beta-reader to catch, or letting slip through to your readers to cluck their tongues at. I don’t argue it’s the only way. Just the best one I’ve found.

And now– see, this is the genius– if you decide to go a-book and narrate your tales… it’s also rehearsal!

Do you ever plan to be a famous author? And what would that entail, hmm, perhaps a public reading of your work in a library or bookstore? An excerpt to thrill millions on radio, whenever Terry Gross interviews you on NPR? Think about it, people. No sense dreaming of the Powerball if you don’t buy a ticket. Read your work. Out Loud.

And after you’ve done that a while, leave the microphone on.

More reports soon! Let me know what you’d like to, um, hear about my audiobook adventure.

4 thoughts on “Can You Hear Me Now? The Audiobook Adventure Continues”