This is part of my library-talk series around the writerly life, and I must say at the outset– it works much better there.

I like to talk to individual attendees, hone in on the genre and 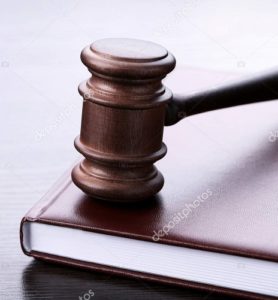 elements that concern them, and hear their feedback. Online, I can only hope for the last of those three if you leave me a comment. I guarantee I’ll come back to you!

Start with the Bottom Line: People will absolutely, positively, and mercilessly judge your book by its cover. Fair, schmair, they are going to. You did. We all do. Remember the cover of your favorite books? You bet. Remember any of the ones you didn’t buy? Bet not.

You’re Focused on the Words, Great: But Don’t Skip the Ones that Come First

Quite properly, you’re thinking about getting to that final page of, you know, the writing: popping down the period and adding “The End”. It’s a worthy goal! But you know it’s not done. This book has to be published and marketed too. It hardly matters if you have an agent and a major publisher lined up, that will still be largely (mostly) (alright, fine, ALL) your job. Most authors I speak to are aware of this and they work at (or at least fret about) the use of social media, query letters, promotion. But I think in the stampede to get from book to back shelf, there’s one crucial chore where many authors spend too little time and energy.

What the heck will be on the front?

The cover of the book often gets short shrift from aspiring and independent authors for a variety of reasons. Most don’t feel they have the talent, and that’s in part because they think the cover is nothing else than the artwork. Some don’t think they have the time, which is kind of odd because no bestseller in the last century went to the Barnes and Noble under a clear plastic binder. What, exactly, do you think writing a story comprises if you don’t believe there will somehow be a cover on it?

Like it or not- and I’m sensing you don’t- the first words of your tale are the picture the reader sees on the front. In fact, it’s the first thousand words of your tale. But you haven’t written that yet! You hadn’t honestly thought about it at all, perhaps.

And that leads to a dangerous idea about book covers: that someone else is going to handle it for you. Dangerous because, in the end, they might.

Traditional Publication Can Help: But Maybe You Shouldn’t Look!

There is nothing wrong with looking for traditional publication. And if you get a contract, one of the most likely aspects of that deal will be that some load of cover design will be taken off your hands. Whether you like it or not.

Because face it, you might not have thought much about the cover, or thought that you personally could do it. But there’s most likely an image there. Or several. And a SLEW of images that are Not My Cover, yes? Your book is unique, a genre-shattering masterwork and the cover deserves to reflect that.

But trad-pub will resolutely not care. They’ve got their own people and will quite likely impose the view of the ones they’re paying over yours.

And here’s a thing: you can accuse them of being conservative, or even chicken. But this stuff seems to work. Traditional publishing knows there are certain images, colors, effects that work to suggest to a potential reader that this book is for them.

Making it Rain Down in Africa

Take a gander at this image, with thanks to Mr. Michael Silver who assembled it years ago. Thirty-six bestseller-type books from all genres, which happen to be set in or concern the continent of Africa. Fifty-seven countries, 900 million people, millions of years of human occupation. And this is all that means to trad-pub. Orange to red backgrounds, sun ALWAYS setting, banyan trees, giraffes and guys who haven’t shaved. Must have three of those elements, and then you’re good. Everything from Singing Grass to Solomon’s Mines, but don’t try to tell THEM what means “Africa” to a reader. Deal with it.

But hey, trad-pub! I’m not spitting on winning a nice deal and getting their help. Just something to consider about the way you control the tale. So, what happens when you don’t win a deal and yet still want to publish? Still think you don’t have to do the work?

If so, you’re not alone. There are some, shall we say, incredible book covers out there these days, from authors who I guess just figured people would flip open and read the story. Don’t be one of those authors. Or actually, these…

First off, let’s recognize something I hinted at earlier. A book cover is more than just the artwork. Hard to be precise but certainly most book covers include:

Let me briefly say, you should also attend to the spine (whether you would turn the book sideways to read the title, that kind of thing) and of course there’s blurb material on the back, with maybe a cover-wrap of the art work, a photo of you, etc. But for now let’s stick with the front cover only.

Who, in their right mind, thought it was a good idea to run with this cover for a book? 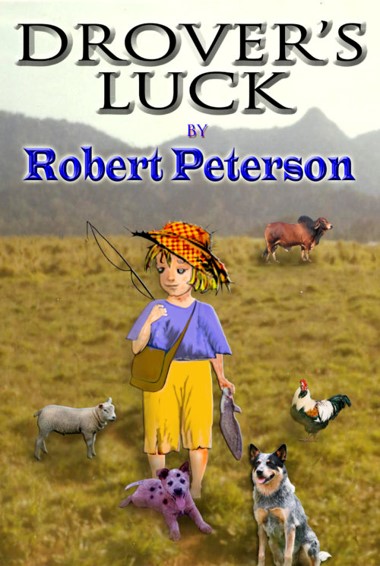 I mean, can anyone out there tell me what it’s about? Children’s story? But then why a word like “Drover”? Fantasy (purple dog)? One attendee suggested “maybe it’s a sticker book” and I think that’s genius, because look at the peel-n’-stick quality to the icons! I mean, real cow, miniature sheep and then cartoon kid?

Two Things Your Cover MUST Do

I’ll go into more detail and use examples in the following article, but since you’ve all been so patient I’ll give you the sneak peek now. Your book cover needs to do two things, which in the end are quite closely related:

My early covers did neither. I feel better about them now and by the way, they sell better too. But, you ask, what kind of message? How do I KNOW it’s professional? I’m very glad you did, and will give you some thoughts next time.

For now, look at these two and decide– really good, or sort of good? Kind of bad, or “Drover’s Luck” level bad? HINT: These are authors I HAVE met. 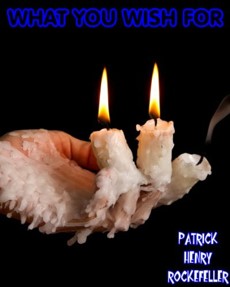 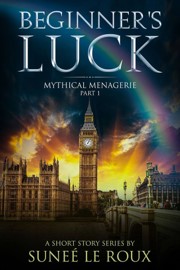 4 thoughts on “B(u)y the Cover: Your Tale’s First Thousand Words”