If you missed my opening post about doing a-books… well, seriously what is wrong with you? But I am, and now I’ll relate a bit of how I got started and operate when making an a-book. I’ll be primarily involved in creating a-book versions of my series Shards of Light during summer 2018, and this post finds me with Book One ready to send off and Book Two well underway.

Download Audacity, plug your mike into the PC, open the software and look around. I won’t go into detail about the use of Audacity, a lot of it is pretty intuitive. But here’s one tip: check here to be sure it’s using your microphone, and not just defaulting to your PC!

What Am I Looking at Here?

Again, this will be most useful to those using Audacity. The opening screen looks like this: 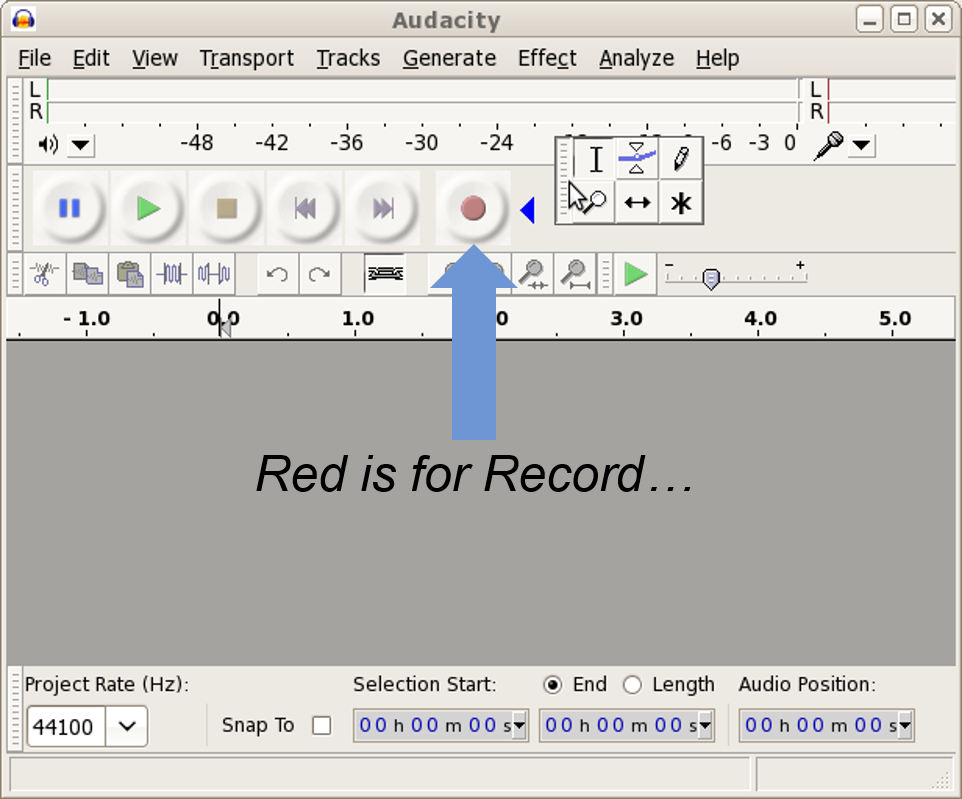 Once you start recording– click the red button, duh– a track will leap into being with what looks like a scratchy line on it. “Shit” you exclaim, forgetting that it’s a recording. And right there is the swear word, like some kind of seismographic reading.

That’s because what you’re about to do is earth-shaking, get it?

A few more swear-words and some fumbling with the mouse later, you hit the yellow “Stop” button. Click on the green triangle to Play, and you will hear that swear word again, only this time it will sound like James Earl Jones said it, or maybe Dame Judy Dench, or Barney Fife, Roseanne, anyone else, just… that can’t be you, can it?

Not Me, No Way

It’s astonishing to me how many people have never really heard the sound of their own voice. There are two groups of people in this regard, and if you didn’t like what you just heard, you are standing in the group that has 100% of all people in it.

Nobody likes the sound of their own voice*. Not at first.

Listen to the sound of your voice and go ahead, be critical. Change what you can, leave what you can’t. There are people in your life who love you and they probably feel great when they hear you speaking.  You could be one of those people!

Back to the recording, and one of the greatest things about Audacity. Ready for the miracle?

Right up under Edit, you can see Undo Recording. Click to remove that naughty word from existence. Then try again. Of course, there will be times when you make a mistake and don’t realize it until later. But there are tons of times when you WILL know, and this is a very handy time-saver. It also works great when you are trying out F/X on a certain section, like Amplify or Echo. Don’t like what you just heard? No worries, Undo and try a different setting or strength.

Narration is Performance, Yo

You can do this as well or as poorly as you like. Again, kind of like writing. Probably the biggest mistake you can make here– maybe the only one– is to think that your reading has to be a finished product the first time out of the box. Is that how you write? No?

So. Prepare. Focus. Smile a little before you talk. And be ready to not worry and try again.

Laying Out the Track

You. Can’t. Fail. Unless you give up. Read the tale, stop when you want, go back and listen, see if it’s a keeper. It’s no different than using highlight-delete on a rough draft. No, it’s not- and stop arguing with me about this.

One thing to consider is whether you want to lay out “the whole thing” in one track. Let’s say you’re trying for Chapter 1 (could be anything, but I picture chapters coming in around 4-6k words). Some folks say that the listening audience wants something around a half-hour long, and that would be my rough guess but don’t get too hung up on that. So we’re trying for a chapter here.

If you Record, Stop, Undo and Record again, Audacity will lay out a single track for you, one line of seismographic line-bumps. Let’s say you read the first three paragraphs, and after a couple attempts you find something you like. Especially early, it’s important to listen to what you’ve recorded because it will help you see if you’re too close or too far, and also whether there are background noises on your track. To some extent you can’t affect these, but it’s something to consider. My home AC system is a very quiet hum and I don’t think it’s too distracting, but sometimes my refrigerator knocks like an old car and that will kill a take completely. Again, no big deal.

But whenever you decide you have something worth keeping (meaning you don’t Undo it), when you start to Record again, Audacity will immediately create a second track, below the first. If you position the cursor at the end of your first track and hit Record, it will pick up from that point but in a second track. On the replay, it will move right through. This is true if you want to add a sound effect later (don’t worry about it now), the point to keep in mind is that you could end up with a stack-o’-tracks and IT IS FINE. I’ve had dozens in some of my chapters, but the listener doesn’t see that, it all comes out as a single track.

Experiment, get used to the sound of your voice, try again and realize nothing is any more permanent in the recording than it is with your writing. Next time I’ll touch on the editing process where you will need to spend a lot of time . Again, JUST as you do with the writing.

*- When I wrote this statement I was relying only on my personal opinion about what was true. Little did I suspect there’s a TED talk to prove it! Check that out if you doubt me, and also if you want to be horrified by what your voice is already telling people.

In fact, your voice comes to your own ears through your bones. So yeah, sounds different. But the more you record and listen to yourself, I find, the more this difference fades away- whether it’s because I’m modulating my voice or just getting my ear more accustomed, I don’t know.