A post originally published elsewhere in 2012, now brought home to my own site.

This could be amusing to you, or perhaps it will serve as a dark warning about the dangers of writing epic fantasy to the modern world. I’m aiming for both!

I ran into a conundrum when taking notes on the most recent chapter of my WiP, “The Plane of Dreams”. I had first witnessed the events in this tale more than twenty-five years ago; before Hussein had invaded Kuwait, almost before Al Gore had invented the internet. I’m not a scientist, I studied history. But enough excuses. I saw something back then, in the Lands of Hope, and now was starting to doubt the truth of it.

{Brief aside, for anyone tempted to conclude that I made this whole thing up. I repeat, I am not a writer, but a Chronicler, and the event I refer to was witnessed by over a half-dozen others. So, nyah.}

To the matter at hand: 26 years ago (real world calendar), a group of heroes and I were observing the fabled underworld city of Jengesalamur in the year 2001 ADR. 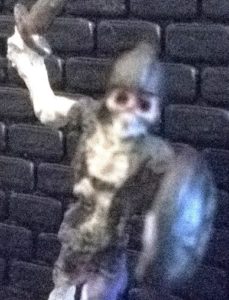 The Tributarians, after surviving several weeks on the perilous Shimmering Mindsea, had discovered the ancient city of Despair and come across notes from the journal of Sekinder, the mad alchemist who had been the city’s ruler millenia ago. In his diary, Sekinder made obsessive references to his quest to find the Eternal Reagent, a chemical solution that would turn any substance to gold. After much searching through the city, and fighting against undead guardians there, the heroes came across the alchemist’s laboratory. There, to their horror and astonishment they viewed all that was left of Sekinder: a perfect golden skeleton holding a bubbling alembic over his head in short-lived triumph.

After much rejoicing, a few unkind jokes and some more deadly encounters, the Tributarians hauled the skeletal treasure back to civilization, thus ensuring the fame and fortune with which they began the tale known as “The Plane of Dreams”. Now that I was tasked with writing up that story, a sudden thought gave me a chill- was this even possible? Not the bone-to-gold thing; that we accept as a matter of course. But what would readers say about a golden skeleton?

Could they have moved it? And what would it be worth?

As I said, I am an historian, not a mathematician (or a doctor, to echo James “Bones” McCoy!). My early calculations, containing several important errors, indicated a weight that w

as beyond credit. I almost panicked- what had I missed? Was gravity in the Lands of Hope as low as that on Barsoom? Was Spitz, the party’s largest warrior, five or six times as strong as my notes indicated? But I knew what I saw, so I plunged back in and eventually straightened out my calculus. You might say I boned up on the subject. But I wouldn’t.

Sekinder was, for all his evil and arrogance, a normal-sized human, a bit thin and tall like others of his era. We can safely assign him a weight of 150 pounds and height around 6 feet.  The weight of a human skeleton (using Bing to find all my mathematical/scientific data points) ranges from 12-20% of the total, and I used the suggested average of 15%. At this point I converted to metric (because of the later calculations needed) so I concluded that Sekinder had 10.13 kg of bones under his skin. Who’d have thought the old man to have so much calcium in him…

He Ain’t Heav– well, OK he’s NOT my brother

If all that mass of bone converted to gold, the total weight (gold being 10.17 times as dense as human bone) would be 102.96 kg (around 225 pounds) of golden treasure on the hoof. Literally.

But just a moment, what about calculating via volume? What is the volume of a human skeleton, and what would that weigh converted to gold? This route yielded a more interesting, and somewhat more alarming figure.

The only solution I could find was to draw an imaginary cylinder around Sekinder. The formula you’re looking for is:

And assuming Sekinder’s diameter is 2 feet and height 6 feet, you arrive at 32,556 cubic inches. How much of this was comprised of skeleton? I could only guess that it was a small percentage, since the cylinder contained a lot of not-Sekinder within it. I used a figure of 5%, yielding 1,628 cubic inches. Converting to cubic feet and then to cubic meters gave me just 0.03 cubic meters of bone. Seemed small, but that gave me a startlingly-high 50.69 kg of human bone in the alchemist’s body- in gold, a whopping 515 kg (over half a ton in English pounds)!!

Even so, I realized, Spitz could do the job of moving it. 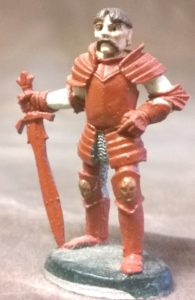 This is where it gets tricky, because while we observed these heroes of the Lands closely over the years, we couldn’t actually pull them into our world and give them a nice NFL tryout or other means to gauge their strength. But I used some guidelines I had developed in my notes. Please understand that Spitz, at six and a half feet of ripped muscle, is enormously strong. Spitz can use his foot to batter open locked doors, and if he drops his two-handed sword he can snatch up tables and chairs to swing as weapons. He’s also a true shield-brother with a sexy deep voice, charming smile, not a jot of fear and a snazzy dancer. OK, exaggerating about that last bit. But he’s STRONG.

Spitz can lift and carry 90 kg for a long period. So by my first method, he could almost tuck Sekinder-in-gold under his arm and walk away. If he sets his mind to lifting, Spitz can certainly bench-press 125 kg (about as much as he weighs) and dead-lift nearly 180 kg; more than needed by the mass-method, but still short by the volume-method. However, he doesn’t need to lift the statue, he only needs to SHIFT it. With no mechanical assistance, he can push 324 kg, and with maximum exertion Spitz can shift up to 450 kg, which is pretty close. Spitz and the heroes rigged up a travois, like a cot with two wheels on one end, and carted Sekinder off with his arm in the air and that look of astonishment still stamped on his skull-face. Spitz split time with the others in the party (who worked in pairs) hauling it over sand (admittedly, not an ideal surface).

So they WERE able to move Sekinder- affectionately known to the heroes as Golden Boy- though not fast enough to outrun the nine-foot tall iron demon-golem who guarded the city. But that’s another story!

How much was this treasure worth when they got it home? As you will see in the tale, Sekinder was never melted down and cut up into coins; the statue was sold intact as a work of art. So once again I had to estimate. Depending on which method you fancy, the Golden Boy weighed in at either 3,300 or 16,500 Troy ounces 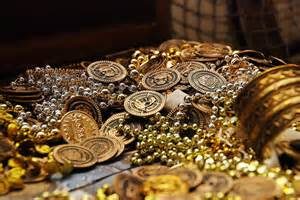 (the unit of measure whereby gold is valued in the real world). I didn’t bat an eye at purity- nothing but 24-carat gold, I was sure, would do for an evil alchemist willing to spend that long and work that hard for success. At a current price of $1,657.45 (goldprice.org, noon on Thursday April 26th 2012), that yields a market price (before Imperial taxation of course) of between $US 5.4 and 27.4 million. The Tributarians probably got ripped off on the price, and still were outfitted with new enchantments, the finest equipment, nothing but the best… until the robbery…

So then- how much of all that went into my story? Not one jot.

But yes- evil does not pay (though it can occasionally generate a lot of loot for the good guys). Sekinder did die in the moment of his victory, the Tributarians did haul him back to town, Spitz was bushed (yet still manly), and the heroes were definitely rich as well as famous. It’s a relief to know that my eyes did not deceive me.

Here’s hoping that the internet age won’t rise up to haunt you in your writing.

4 thoughts on “A Salute to Sekinder: or, How Much Does a Golden Skeleton Weigh?”