Whereas the principal applications of astrology are for divining the facets and tendencies of an individual’s personality based on the precise time of birth, or in anticipating great events in the future of nations, it can also be used to forecast events in the life of a single person. The system is, however, extremely arcane and involves the use of precision equipment, in addition to an extensive education in the proper measurement and interpretation of the heavenly bodies and their alignments: outside the noble class, few beings have the time or wealth to set aside an expert whose main occupation is to read the stars and report on their meaning. 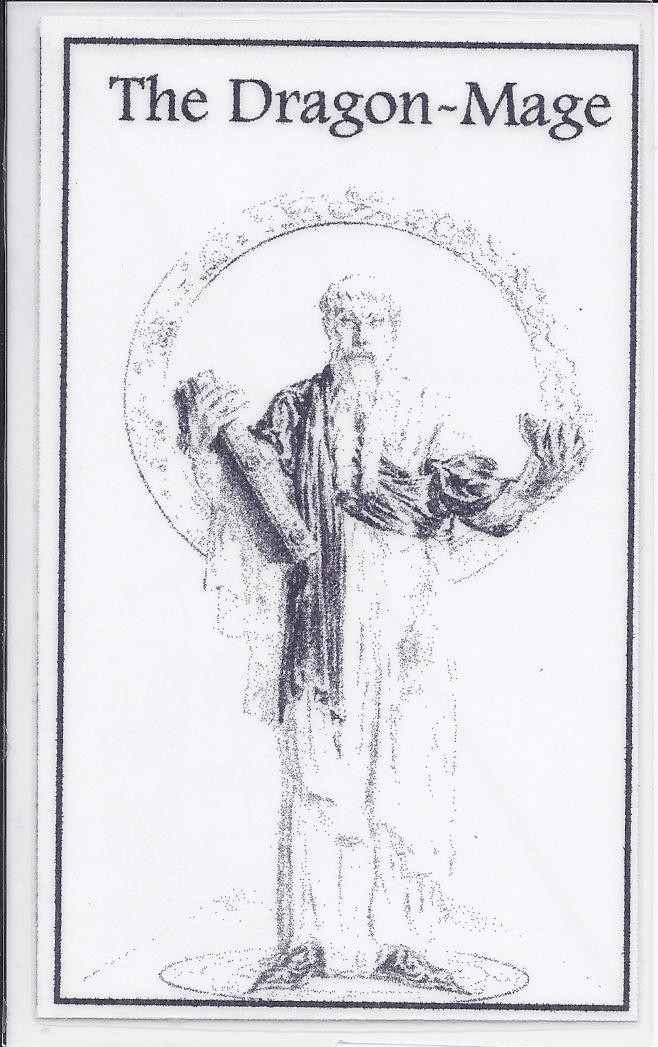 For the common class, resort is usually had to the Tarot, an alternative system of divination which, while less scientific, has the advantages of simplicity and ease of use. A good deal of experience is still required, to properly read the cards; and even with the best reading, it can transpire that a key card should have been read differently, or that one was emphasized at the expense of another. No principled diviner would ever claim that his or her readings were guaranteed to be accurate; the cards, if handled properly, do show the future clearly, but must still be read right. Even then, it is important to note that nothing dictates the action of sentient beings except free willed choice. These cards, like the stars upon which powers they draw, show tendencies and events in the larger world, but individuals are still able to make their own decisions. Those decisions, in conjunction with those of all other sentient beings and inanimate forces, combine to form a new matrix which will need to be read anew.

Elements of the Tarot: for a divination to be proper and allow for the possibility of an accurate reading, the following elements must be present:

The Querent or person who desires to know, must be present in person or at least named; in the latter case, only the most general indications will be given, subject to grave error in interpretation.

The Reader, or person who will throw and interpret the cards. Traditionally, the Reader sits opposite the Querent: Querents may read for themselves, but increased knowledge of oneself is a double-edged sword as regards interpretation.

The Query or question to be answered; this must be stated and clearly known. The cards respond to minor differences in wording, and many readers spend their lives in an effort to discern nuance and inflection. Usually, the Querent states the question just before imbuing the cards.

The Tarot, being a complete deck of Tarot cards (described below) must be present from the first moment. 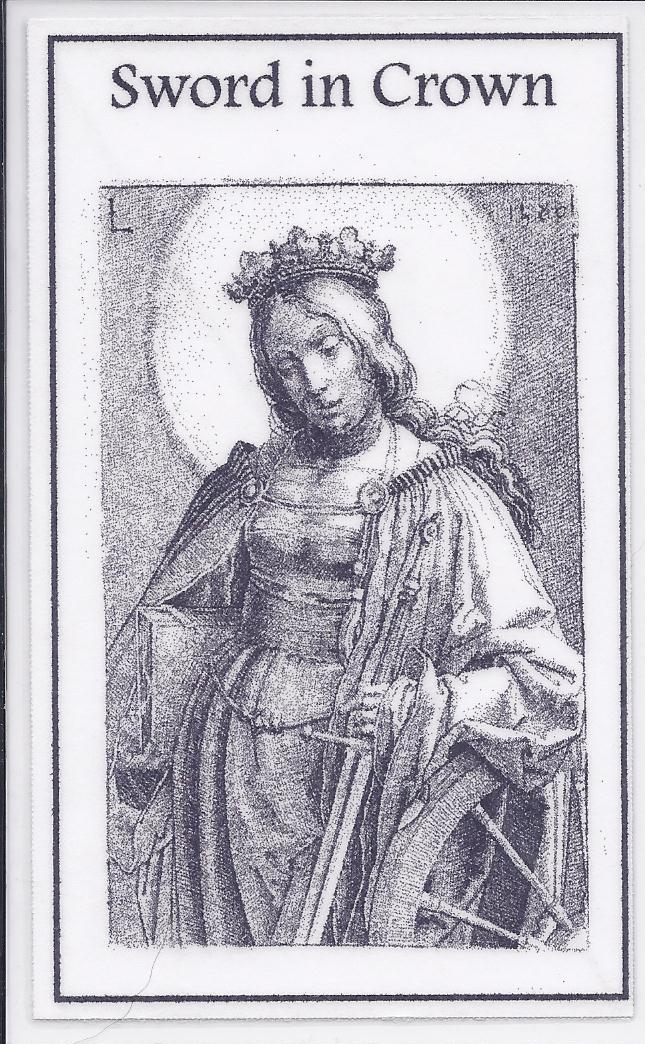 Procedure: After the reader has arranged the Tarot deck with proper care and laid it on the table, the Querent states (or sometimes writes out) the Query. Next, as the reader ponders the meaning of the Query, the Querent imbues the Tarot with his or her unique energy: the most common method for this is a cut of the deck, but some cultures recommend shuffling, chanting over or even casting a spell at the deck. The Tarot must not be physically harmed, and bodily contact, while not a prerequisite, is the most important element: without physical contact, the reading will act much as if the Querent were not present. Immediately after the Tarot has been imbued (the Querent announces when he or she feels comfortable), the Reader takes charge of the deck again and begins to lay out the pattern. If any other being touches any card of the Tarot before the entire pattern is laid out, the process is tainted and must begin anew. Quiet during the reading is not fully necessary, but is considered a courtesy to the Reader and can improve the accuracy of the interpretation. Some Readers prefer to “mark” a Tarot throw, pondering it for some time before pronouncing interpretation: this can result in nothing more than a back-up reading of history, as the event in question may have already occurred.

Throws: While the Tarot below and the procedure defined above are seldom altered, there are as many throws as there are cultures, and perhaps as many as there are individual readers. Here are two of the most common and famous.

Single Throw is used most often for readers who are querying themselves, and are fairly sure of the resultant forces, but wish a kind of “sanity check” on their intentions before acting. Its results with outside Querents are decidedly erratic, but the Throw is quick and can be easily repeated. After the Tarot has been imbued and Query announced, the reader cuts the deck and turns over a single card, interpreting it in a manner similar to the final card of the Grand Wheel, following. Hasty imbuement is a prime danger to accurate reading here, and a complete picture can seldom be gained. 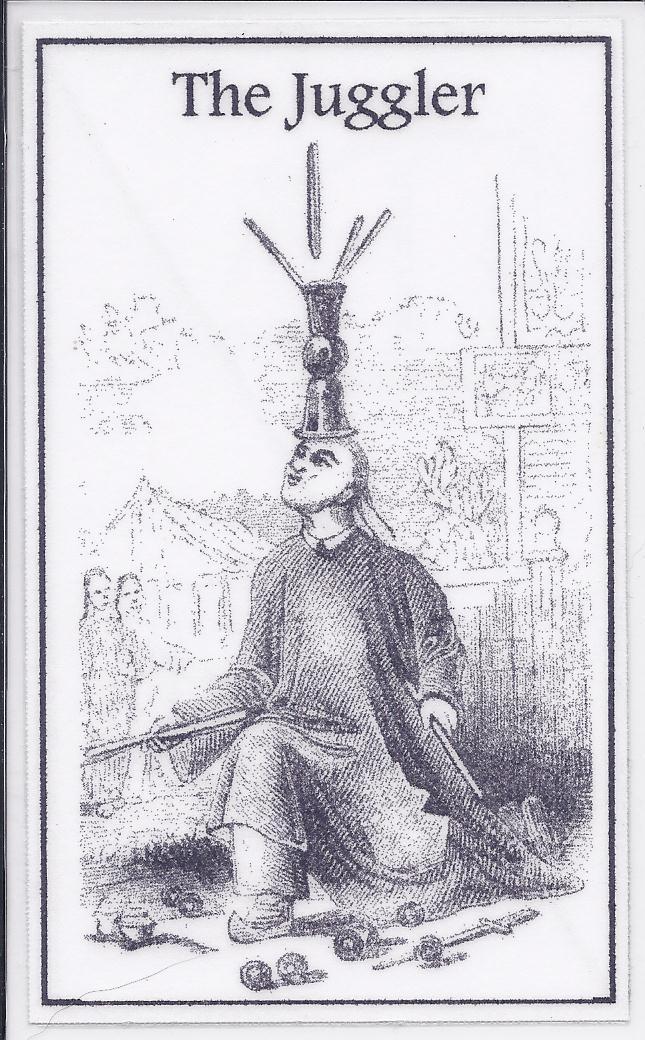 The Grand Wheel is more often known as the Tarot throw of choice, as it provides a completeness and opportunity of great assistance to the reader, especially when the Querent and Query are not well known. The casual suggestion that the number of cards allows the reader to “cover” for a bad reading is mere cynicism and disproven by the statistical accuracy of the overwhelming majority of recorded throws. After imbuement, the Reader cuts the Tarot (usually) and sets out the cards one at a time in the fashion shown below; it is traditional to announce the position of each card, followed by its title when the card is turned up. Some Readers give indications of the interpretation after each card shown, while others prefer to wait until all have been laid out: Querents who leap to conclusions based on early cards, before the Reader has had a final say, are taking their chances. But every word pronounced during a reading is thought to have some significance, even emotional outbursts; for this reason, it is generally a strict custom that outsiders (if permitted to watch) keep silence until the reading is concluded. 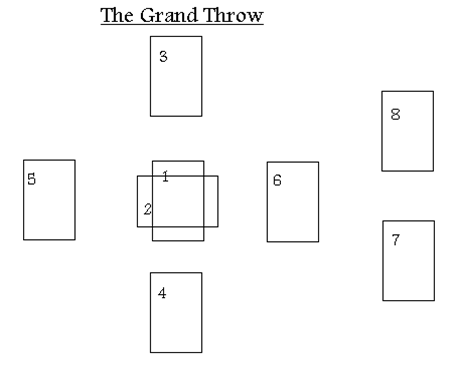 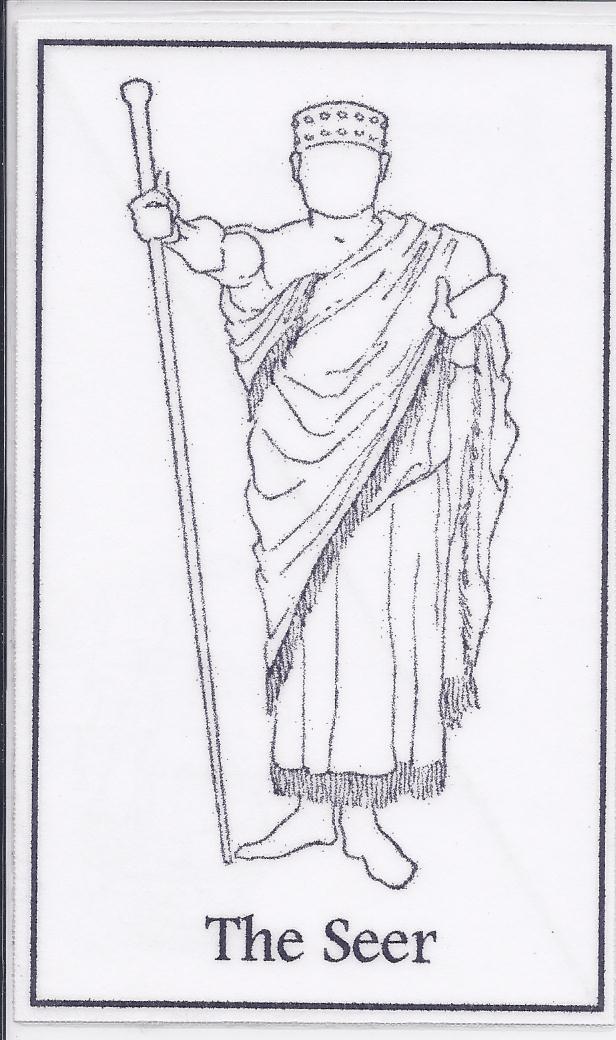 The Tarot Deck and Their Meanings: Readers are cautioned that only the most general tendencies of the Tarot cards can be given in a few short sentences. Interpretation is as difficult as it is myriad: bear in mind only that the cards cannot be wrong. Mortal Readers and Querents, as well as imperfect conditions, can certainly be, and often are. A properly respectful attitude is most important.

The Tarot deck is divided into the Suits, the Faces and the Trumps.

The Suits, or Arcana Minor are four in number, and each have individual meanings as well as associations that run through their fellows. These are indicated on the chart below. Many readers do not regard Suit cards as invertible; for those who do, the opposite of the meaning given here is generally indicated. 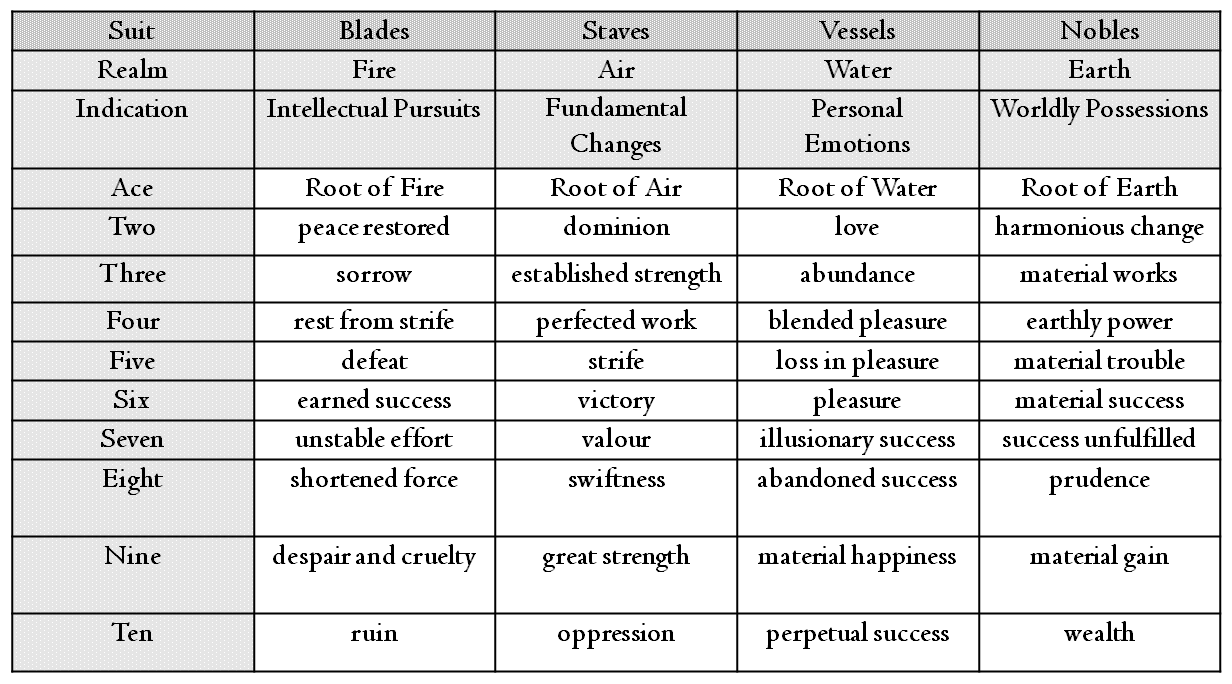 The Faces, considered by most to be a subset of the Arcana Minor, have significant variations in appearance and interpretation by culture. Here is one widely accepted variation. All agree that the Faces are more likely than any other card to represent a single individual.

The Trumps, or Arcana Major, receive quite a lot of attention, which is only partly proper. Due to their evocative names and usually wondrous artwork, they are often mistaken for the most important cards under all circumstances. It is possible, though less satisfactory, to throw Tarot as above with only Trumps in the deck, but the picture yielded will be superficial and subject to grave error in interpretation, much as if events in the real world were reduced to the sort of morality and causality that exists in children’s stories and fairy tales. 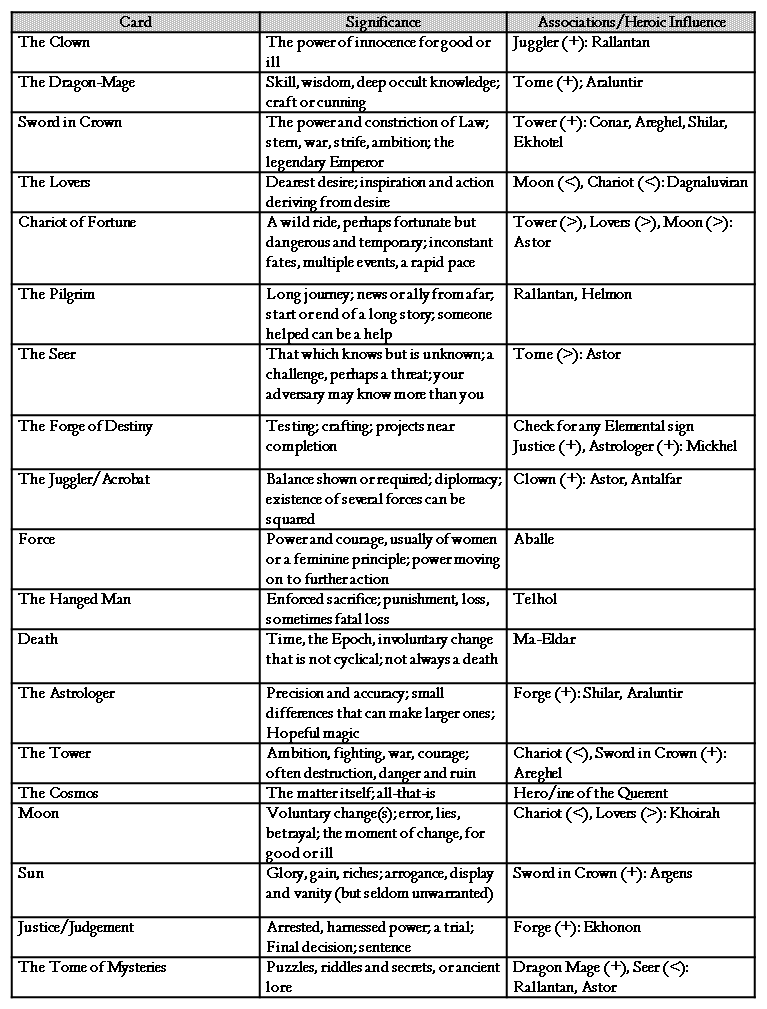 (+) if thrown with the indicated card, a mutual and generally beneficial amplification of both cards’ tendencies.

(>) if thrown with the indicated card, this card will have a large and usually negative growth in power.

(<) if thrown with the indicated card, this card’s tendencies will be mitigated, whether for good or ill. 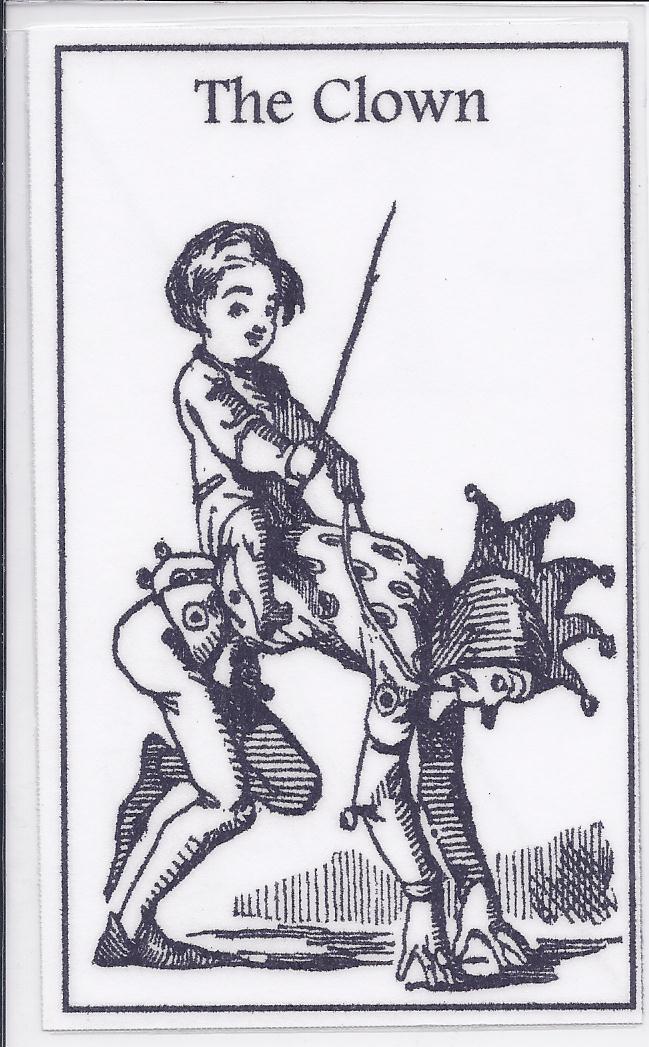 Final Prisoner is a child’s solitaire card game, played without the Trumps and Squires/Handmaidens cards, by the gypsies and other peoples in the Lands. Like most supposedly innocent children’s pursuits, the game can be used for a moral purpose. By learning how to win, the player also learns a valuable lesson in social justice.

In Final Prisoner, an entire kingdom (represented by the deck of cards) has been taken captive and thrown into a tight jail cell. A tunnel is being dug to freedom, but there are a very small number of spaces through which the prison population can maneuver on their way to freedom. Since the guards watch the highest ranking figures most closely, they must remain in the cells until the end. Further, there will be loud arguments if people of the same race or gender are allowed to escape at once, ruining the escape effort; they must be arranged in alternating order to ensure success.

Deal out the shuffled deck face-up in eight columns, with seven cards in the first four columns and six cards in the last four; this equals 28 + 24 = 52. You may move cards one at a time following the usual rules of solitaire; a card may be laid on top of any card that is one higher in rank and of the opposite gender. Blades and Staves are “masculine” suits, whereas Vessels and Nobles are “feminine” suits. You may also move a card into one of the eight spots over the top of the columns. The four columns to the right are the “escape” slots; whenever an Ace has been exposed at the bottom or “end” of a tunnel, it can be moved to an escape slot, followed by the Two of that suit, then the Three, and so forth. The four spaces over the top of the left four columns represent the room in the tunnel; cards may be moved there from the bottom of any column, or back to any column where the play is an eligible. If a column is ever completely cleared, then any card from a free space or from the bottom of any column may be moved there. “Escaped” cards never return to the jail or tunnels.

It is possible to win any game of Final Prisoner, no matter how complex the layout; in some cases, however, even one or two wrong moves at the beginning will suffice to get you “stuck”, and foil the escape. The message of the game, or moral of play, is quite simple: the highest ranking folks must wait and protect the others if the escape is to be successful. Either everyone in the kingdom goes free, or no one does.